The Iranian government is reportedly taking steps to expand regulations on large public news channels on the instant messenger Telegram. The move would apparently affect groups with more than 5,000 subscribers.

It remains unclear, however, if state officials seek dramatic changes to controls on these online communities (ostensibly in the battle against “fake news”), or if the government merely plans to extend and continue existing Internet controls. 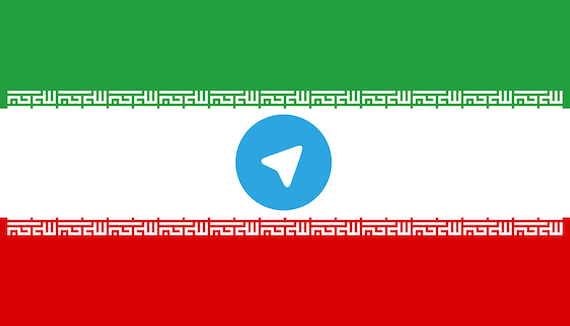 The Iranian government has announced plans to regulate social media channels with more than 5000 followers. As the largest social network application in Iran, this is thought to directly effect Telegram. Image created by author.

As reported by Tasnim News, a hardline news agency affiliated with the Revolutionary Guards, Iranian ICT Minister Mahmoud Vaezi made the announcement at a press conference during the National Conference on Public Service. Vaezi cited the dangers “unofficial news channels” pose in Iran's rural and less developed regions, where fake news and misinformation have gained sizeable audiences.

Considering that people have to trust the news released on these channels, it was decided that channels with more than a certain number of members will require a license.

Minister Vaezi's announcement builds on discussions now underway inside Iran's Supreme Council of Cyberspace, the country's chief authority on Internet policy. According to Vaezi, the ICT Ministry will manage the new licenses alongside the Ministry of Culture and Islamic Guidance — the state agency responsible for regulating Iran's media. Vaezi says the government will form a committee in the coming months, and news channels with more than 5,000 subscribers will be required to win the committee's approval to continue operating legally.

In the initial conversations that have taken place, news channels with more than 5,000 members need to get a license. However, more details will be revealed once the regulations have been finalized.

In his remarks, Vaezi never mentioned Telegram by name, but the chat and social-media platform, with its 30 million users in Iran and a public-channel feature, is likely the government's top target. Telegram, moreover, has been accused recently of facilitating the spread of viral and fake news stories.

Telegram is one of the few Western social networks that hasn't been blocked in Iran. Facebook and Twitter, for example, have been banned since 2009. Originally created as a platform for secure instant messaging (with many critics still unhappy about the service's security), Telegram has morphed into a major news source after it introduced public channels in September 2015. This is especially true in Iran, where local news websites and many blocked diaspora media outlets are able to broadcast content freely to Internet users who subscribe to their public channels.

Some political observers even credited the reformist faction's savvy use of Telegram channels with a wave of victories in Iran's 2016 parliamentary elections. The reformists’ success was all the more striking, given the dominance of Iran's conservative political faction over the country's traditional media, such as the Islamic Republic of Iran Broadcasting (IRIB).

How vulnerable is Telegram?

With Telegram's data servers located outside Iran, it's unclear how state officials intend to identify the administrators of specific public channels on the network.

The Iranian government announced in July 2015 that they would not censor Telegram despite the existence of immoral content on the platform, but would instead work with Telegram to regulate it. This was an accusation the company's founder and CEO denied vehemently.

In a meeting of the filtering committee in January 2016, the government decided against censoring Telegram, however in May 2016, the Supreme Council for Cyberspace announced that all platforms wishing to remain accessible in Iran had one year to relocate their servers inside of Iran. It is unclear whether technology companies such as Telegram will comply, or if the government will follow through on the censorship if the request is not complied with.

Regardless, Iranian officials have in the past managed to track down and arrest some administrators of Telegram channels. In November 2015, police arrested the administrators of more than 20 groups on Telegram for spreading “immoral content.” Iranian authorities have also hacked several Telegram accounts by intercepting text messages used in the service's two-factor authentication.

Despite the obvious danger of political censorship, Iranian officials are also acting against the genuine threat posed by fake news. Just as fake news stories on Facebook may have influenced the United States’ recent presidential election, phony information circulated on Telegram is polluting Iran's information space, as well.

There have been two notable cases of fake news rippling across Iran, causing mass panic and paranoia: a deadly hostage crisis that never happened, and reports that the government could track individuals’ Telegram activity by using their IP addresses.

The hostage crisis that wasn't 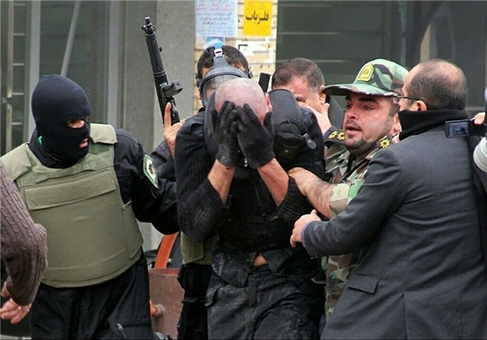 On November 22, news started spreading virally on Iranian Telegram channels that 27 people had been killed in a hostage crisis at a shopping mall in central Tehran. Photos allegedly taken at the scene turned out to be from an old police training exercise. The story appeared in the moderate-conservative newspaper Tabnak.

Images surfaced on Iranian Telegram channels in June 2015 showing a notice from Iran's Cyber Police (FATA) warning an unknown user about their unlawful Telegram activities. The head of FATA quickly denied this, saying Iran's cyber police never send private messages like these. No one else has produced evidence that they ever received such messages, and the IP address shared in the message is invalid. The message is thought to have originated from a channel claiming to be the official Cyber Police Telegram channel. 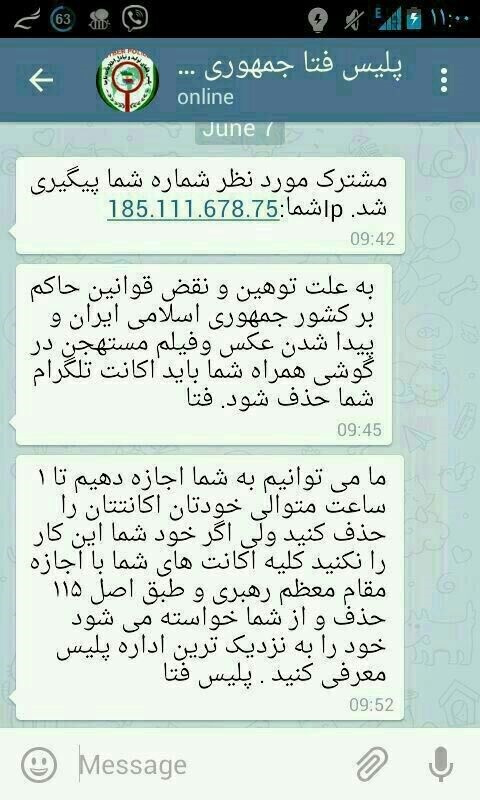 Screenshot of the viral fake notice from Iran's Cyber Police to an Iranian user to take down his account. Translation of the notice is to the left. Screenshot from a fake Cyber Police Channel on Telegram.

Because you have insulted and infringed upon the rule of law of the Islamic Republic of Iran and have found pornographic photos and videos on your phone, you have to delete your Telegram account.