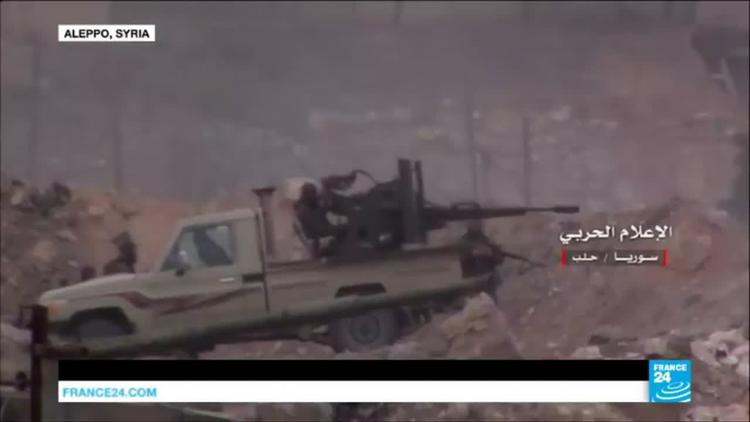 By Friday evening outside observers like Rami Abdelrahman of the Syria Observatory in the UK were saying that even more of the East Aleppo pocket had fallen to the Syrian Arab Army, Hizbullah and Iraqi militias and that the government forces had consolidated their control over districts taken midweek. About half of the eastern city has now been lost to the rebel forces. Tens of thousands of civilians have fled, some to regime-held West Aleppo and others into Kurdish-held territory.

At the same time, according to the Saudi-owned, London-based pan-Arab daily al-Sharq al-Awsat [The Middle East], secret talks between rebel leaders and Russia in Ankara collapsed on Friday over Russia’s demand that several hundred fighters belonging to the Levantine Conquest Front, formerly the Nusra Front, leave Aleppo before any cessation of hostilities could be agreed to. The US and Russia list the LCF/ Nusra as a terrorist organization; its leader is sworn to allegiance to core al-Qaeda chief Ayman al-Zawahiri.

The some 3,000? remaining rebel fighters of the East Aleppo pocket include a diverse set of groups. Some are defenders of a neighborhood and by all accounts not very ideological. Most probably believe in some form of political Islam and some are Muslim Brotherhood. Russia maintains, however, that the Salafi Jihadi LCF is the de facto leader of all the militias in East Aleppo and therefore tars them all with the brush of al-Qaeda and terrorism. For their part, the rebel leaders are unwilling to let go of al-Qaeda because its ranks contain the best fighters and they fear the Russians are attempting to divide and rule them. What guarantee, they ask, do they have that if LCF fighters exited, the Russians would keep their word and conclude a cessation of hostilities?

The Syrian rebels’ unlovely attachment to the al-Qaeda group has been one of the reasons for their downfall, since it was difficult for Western powers to back them or to fend off Russian objections that their efforts were spearheaded by Bin Laden, and later al-Zawahiri.

Russian and regime airstrikes and artillery, and return fire by the rebels, have allegedly killed about 300 civilians since the current campaign began two weeks ago. Inasmuch as some of the airstrikes appear to have been indiscriminate, those would be war crimes. The rebels are accused of having shot civilians attempting to flee their control.

In a recent panel discussion on a foreign affairs television show in Moscow, “Evening with Vladimir Solovyev,” the Russian analysts were virtually licking their lips over the prospect of a decisive win in East Aleppo. The discussion was translated by BBC Monitoring:

One guest, the president of the Academy for Geopolitical Issues, Leonid Ivashov, said that the taking of East Aleppo was not purely a “tactical success”, but rather is a “matter of geopolitics” as well. He said that the The Russia-led coalition in Syria is radically altering the world, adding that: “a new multipolar, fairer and safer, world is coming into being there.”

Veniamin Popov, director of the Centre for Alliance of Civilisations, said he had hopes that East Aleppo would be taken quickly. At that point, he observed, the Middle East will be “seriously changed” and a “trend in geopolitics” would begin that recognizes that “it is necessary to reckon with Russia.”

Ivan Konovalov, head of military policy and economics at the Russian Institute of Strategic Studies, said that a victory in Aleppo would “greatly change Russia’s influence in the region.”

That is, these Russian analysts see the imminent fall of the East Aleppo pocket as not only a significant turning point in the Syrian Civil War but as the announcement that Moscow is back. The Russian Federation is a superpower in world affairs, they are implying, just as the old Soviet Union had been.

Russia will henceforth be seen as a force that must be reckoned with, they are saying.

Ivashov argues that the emergence of Russia as a great power is good for the Middle East. Now the dynamics of the region will differ from country to country, depending on the diplomatic and other aid each receives, and from which power. But the new Middle East aborning in the ruins of East Aleppo will be multipolar. The era of the US as sole superpower is over. And on top of that, this multipolar world will be more just and more fair. (Source: Rossiya 1 TV in Russian 1410 gmt 30 Nov 16, BBC Monitoring).

Not sure if the news of the 300 civilian deaths has reached them.