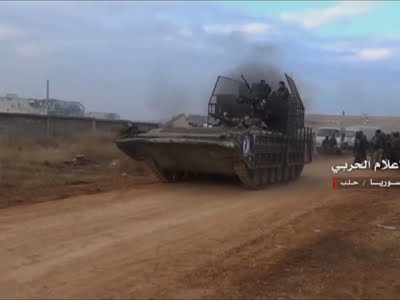 the left-leaning Lebanese newspaper al-Safir [Ambassador] reports that the armed resistance to the regime of Bashar al-Assad in the East Aleppo pocket is finished. Reports from Wednesday morning say that the ceasefire that Russia and the regime signed onto in hopes that the few hundred hold-outs among the guerrillas would leave has now broken down amid heavy fire. Civilians also continue to flee the areas under rebel control, though the humanitarian corridors promised by Russia appear never to have materialized. The plan had been to allow some rebels to flee to Idlib, where the rebels led by al-Qaeda have a perch. Nevertheless, hundreds of rebels attempted to flee East Aleppo, as did noncombatants.

The Russian victory in Syria against fundamentalist Sunni Arab militias was made possible in part by Iran. Russian fighter jets simply bombing from on high would have been useless. It was Iran that directed the Lebanese Hizbullah and the Iraqi Shiite militias to join the fight, backing up the some 35,000 to 50,000 Syrian soldiers who remain and have not defected. The Russians gave these forces air support, bombing rebel positions until the Shiite militias and the remnants of the Syrian Arab Army could over-run them.

BBC Monitoring translated a Russian television discussion among experts, broadcast on Dec. 12, on a show called “Majority,” on the Gazprom-owned NTV channel. (How refreshing that in Russia, the natural gas industry has its own television channel; sort of like the future US State Department under Trump).

In the course of the discussion, a member of the Russian parliament’s defense and security committee, Andrei Kondratyev, boasted of Russia’s increasing influence in Asia, where Moscow allows Iran and Pakistan no longer to be “treated as pariah states.” He said that after the speaker of the Russian parliament, Valentina Matviyenko, visited Iran, a number of Russian investment projects were agreed upon. He also praised Iran for reducing the terrorist threat in Central Asia, including Afghanistan.

(Iran as a Shiite state opposes al-Qaeda, ISIL and the Taliban. Central Asia is largely Sunni, and Afghanistan is probably 78% Sunni. Likewise, most Russian Muslims, who comprise as much as 15 percent of the population, are Sunnis, and it is to them that radicals attempt to appeal. Kondratyev is appreciating Iran for fighting radical Sunni Chechens in Syria, fighting Daesh/ISIL in Iraq, and for opposing Sunni radicalism in Afghanistan and the Central Asian ‘stans.’ This stance of Iran in opposing Sunni radicals, he is implying, makes it a natural ally of the Russian Federation.)

Veronika Krasheninnikova, a journalist who works for Zvezda TV (which is owned by the Russian Ministry of Defense!), argued that the US and NATO were likely to zero in on Iran as enemy number 1. They would do this, she said, because Iran is Russia’s ally in defeating terrorism in Syria. She thought it likely that NATO will demand that Russia abandon its Iran alliance.

Clearly, these Russian commentators are unwilling to let the Islamic Republic of Iran go as Russia’s most important strategic partner against al-Qaeda and ISIL, as the Syria campaign showed. it remains to be seen if the Iran hawks in the new administration of Donald Trump can over-rule their boss, who has said he wanted less US military intervention in the Middle East.