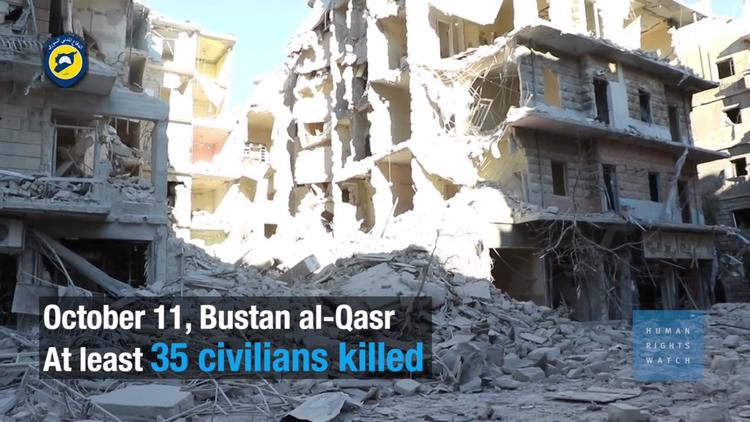 (New York) – The Russian-Syrian coalition committed war crimes during a month-long aerial bombing campaign of opposition-controlled territory in Aleppo in September and October 2016.

The Violations Documentation Center, a Syrian civil monitoring organization, documented that the bombing campaign killed more than 440 civilians, including more than 90 children. Airstrikes often appeared to be recklessly indiscriminate, deliberately targeted at least one medical facility, and included the use of indiscriminate weapons such as cluster munitions and incendiary weapons. Satellite imagery that Human Rights Watch analyzed shows more than 950 new distinct impact sites consistent with the detonation of large high explosive bombs across the area during the month.
“Using that amount of firepower in an urban area with tens, if not hundreds, of thousands of civilians predictably killed hundreds of civilians,” said Ole Solvang, deputy emergencies director at Human Rights Watch. “Those who ordered and carried out unlawful attacks should be tried for war crimes.”

A global coalition of 223 nongovernmental organizations on December 1 called upon UN member states to request an Emergency Special Session of the UN General Assembly to demand an end to all unlawful attacks on civilians in Aleppo and elsewhere in Syria, and immediate and unhindered humanitarian access so that life-saving aid can reach all those in need. Member states should also explore possible avenues to bring those responsible for serious crimes under international law on all sides to justice, the organizations said.

The appeal comes in response to Russia’s October 8 veto of a draft UN Security Council resolution demanding an end to all aerial bombardment of Aleppo, the fifth time Moscow has blocked council action since the conflict began in 2011. It was also the first-time China broke ranks with Russia on a Syria veto and abstained.

On September 19, the Syrian authorities called off a seven-day ceasefire, citing violations by armed opposition groups. Russian and Syrian aircraft subsequently launched an intense bombing campaign against opposition-controlled territory in eastern Aleppo, an area the size of Manhattan, which continued until Russia declared an end to aerial attacks on October 18. The Russian-Syrian coalition resumed aerial bombardment of eastern Aleppo on November 17.

Local residents, media activists, and medical personnel told Human Rights Watch that the month-long bombardment was the most intense since the start of the conflict. One local journalist said: “Those were bloody days. It was a bloody month. Each day, Russian and Syrian airstrikes killed tens of people. It was the most terrible month since the beginning of the war.”

Those interviewed also said that the bombardment was particularly terrifying because of frequent use of bombs that they said they had not seen in the city of Aleppo before. Often referring to them as “bunker busting bombs,” local residents said that these weapons were capable of penetrating and demolishing entire multi-story concrete buildings, meaning it was no longer safe to hide in basements and underground shelters. Some of the attacks with the largest number of civilian casualties were from airstrikes that caused entire buildings to collapse.

The bombardment significantly affected several hospitals in eastern Aleppo. The Syrian-American Medical Society, which supports several hospitals in Aleppo, recorded 16 incidents of aerial bombardment affecting hospitals in the period. In some cases, aircraft dropped indiscriminate weapons such as incendiary weapons and cluster munitions near hospitals, causing them damage. In other cases, attacks struck the hospitals directly causing much greater damage.

Between September 28 and October 14, aircraft attacked the al-Sakhour Medical Center, a well-known hospital in Aleppo that also existed before the war, on at least four separate occasions, sometimes with multiple munitions. Photographs, video footage, and satellite imagery corroborate accounts of these attacks from witnesses reached by phone. The repeated attacks are strong evidence that the hospital was deliberately targeted, Human Rights Watch said. The hospital went out of service on October 1, because of the extensive damage from the strikes.

These UN members agree the General Assembly has a role to play on Aleppo.
Tweet to encourage them to support an emergency special session NOW.

During the month-long bombing campaign, Syrian military forces surrounded opposition-controlled eastern Aleppo. Although Syrian and Russian authorities declared that civilians and fighters could leave through designated corridors, very few did. Syrian and Russian authorities and armed opposition groups blamed each other for this. Whatever the reason, the Russian-Syrian coalition should have taken precautionary measures to avoid and minimize civilian casualties when attacking armed opposition groups, Human Rights Watch said.

The UN estimated that there were about 275,000 civilians and 8,000 fighters in eastern Aleppo at the time. Local residents said that most of these fighters were located near the frontlines and not in the residential areas in the interior of opposition-controlled territory.

On November 28, forces affiliated with the Syrian government advanced to take over key districts in east Aleppo held by armed opposition groups, including the neighborhood of al-Sakhour. Thousands of civilians have been forced to flee deeper into opposition-held territory, into government-controlled Aleppo, or into Kurdish-held areas like Sheikh Maqsoud.

Deliberate or reckless attacks against civilians and civilian objects, including hospitals, committed with criminal intent are war crimes. The laws of war require that parties to a conflict take constant care during military operations to spare the civilian population and to “take all feasible precautions” to avoid or minimize the incidental loss of civilian life and damage to civilian objects. UN Secretary-General Ban Ki-moon told the Security Council on September 28, that those using indiscriminate weapons in Aleppo “know they are committing war crimes.”

“Inaction should not be an option,” the coalition said. “History will judge harshly those that fail to step up.”

The Bombing Campaign
Local residents, media activists, and medical personnel contacted by Human Rights Watch by phone described the month-long bombardment of Aleppo as the most intense since the start of the conflict. Using satellite imagery analysis, Human Rights Watch identified more than 950 new impact sites in Aleppo’s opposition-held neighborhoods between September 19 and October 18. The sites have damage signatures consistent with the detonation of large high explosive bombs. Damage sites were distributed across almost all neighborhoods under opposition control.

Russian and Syrian aircraft have used a variety of air-dropped, unguided munitions including blast, enhanced blast, fragmentation, and concrete-penetrating bombs, often of the 500-kilogram class – meaning that each can contain upwards of 200-kilograms of explosives. Cluster munitions and incendiary weapons have also been used in these airstrikes.

Human Rights Watch has not been able to conclusively identify the type of weapon used in attacks that collapsed entire buildings, often referred to by witnesses and in the media as “bunker busting bombs,” because of a lack of photographs and video footage of weapon remnants. However, witnesses citing tremors in the ground at the time of the attack and the extensive, but relatively contained, destruction of collapsed buildings are consistent with the use of concrete penetrating or demolition bombs with delayed-action fuzing like the BETAB or FAB-500-series unguided bombs.

The Russian-Syrian coalition has used both weapons in Syria. Russian military officials have said that they are using BETAB bombs against “terror” groups in Syria. Video footage published on YouTube show that the Syrian air force also used BETAB bombs before Russia joined the war. Video footage that Thiqa News Agency posted on YouTube on November 17, shows an unexploded FAB-500ShN demolition bomb that the news agency said was filmed in eastern Aleppo.

Civilian Casualties
The Violations Documentation Center (VDC), a local monitoring group, documented the killing of 446 civilians, including 91 children, in aerial attacks in eastern Aleppo between September 19 and October 18. VDC collected the names of 221 of the victims.

In several cases, local sources told Human Rights Watch that the actual casualty number was higher than those VDC recorded. For example, VDC documented that airstrikes killed 39 civilians in the Bustan al-Qasr district on October 11 and 12, while the local revolutionary council in Bustan al-Qasr said that airstrikes had killed 51 people on those days.

The Syrian Observatory for Human Rights, a Syrian monitoring group, said that aerial attacks killed 457 civilians, including 85 children, in the same period.

Al-Kallaseh, September 23
Two members of the local revolutionary council in al-Kallaseh and Bustan al-Qasr told Human Rights Watch in phone interviews that an airstrike destroyed a six-story residential building in al-Kallaseh neighborhood early in the morning of September 23.

Mohammed Nihad, one of the members, said that there were several aircraft in the sky that night, attacking several places:

I was asleep at home at the time. Perhaps 250 to 300 meters away from the place where the missile fell. I heard it fall and hit the ground. But the sound was unusual. It didn’t sound like a normal explosion. A small earthquake followed that even my relatives in Bustan al-Qasr felt. I arrived to the site of the attack 15 to 20 minutes later. We were surprised to see an entire building collapsed. Syria Civil Defense arrived but couldn’t find anyone wounded around the place. Everyone in the building died. We couldn’t rescue anyone. We felt helpless. The Syria Civil Defense kept working for eight days and managed to pull out many bodies.

Nihad said the bomb struck next to an adjacent gas station, burrowed into the ground, and exploded under the building, causing it to collapse shortly thereafter. Nihad also said that attacks struck the gas station itself and other residential buildings in the same period, but without civilian casualties.