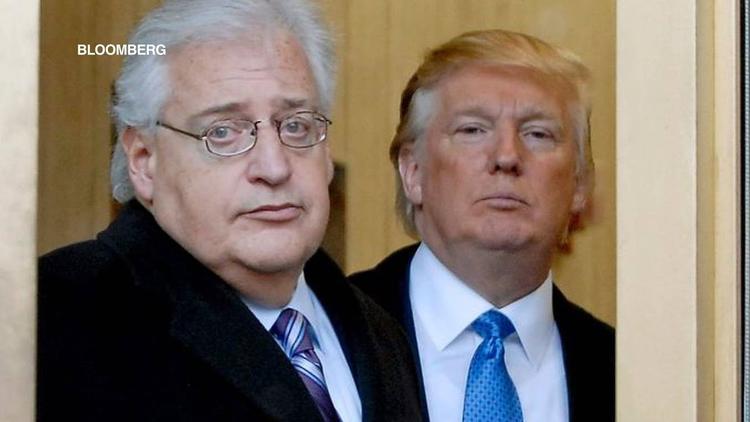 David Friedman’s approach to the issue of peace is clear enough: Whatever Israel’s right-wing government wants, the United States should give.

With his nomination of attorney David Friedman as the new United States Ambassador to Israel, President-elect Donald Trump has sent a very clear message that he intends to shift U.S. policy away from its decades-long commitment to ending the Israeli occupation that began in 1967 and establishing an independent Palestinian state alongside Israel.

That commitment represents not only a strong American political consensus, but an overwhelming international consensus as well.

Friedman’s views can only be described as radical.

He is an avowed opponent of the two-state solution, which he has called “an illusion that serves the worst intentions of both the United States and the Palestinian Arabs.” He supports the United States moving its embassy to Jerusalem, which security experts have warned would be a needless provocation that could further inflame the region, and has described the State Department (which, should he be confirmed, he will be working for) as anti-Semitic and anti-Israel.

He has even called supporters of the pro-Israel, pro-peace group J Street “worse than kapos” (these were Jews who served as middlemen for the Nazis in World War II), and heads fundraising for one of the most radical pro-settler organizations in the world.

Friedman’s approach to the issue of peace is clear enough: Whatever Israel’s right-wing government wants, the United States should give, and Israel alone will decide what the Palestinians will get. According to Friedman, “the Israelis have done a magnificent job of balancing their internal needs for security, which no other nation in the world has, against their incredible track record of granting human rights to their entire population.”

Friedman’s statement clearly contradicts every human rights organization in the world, including in the United States and Israel, as well as the State Department. It also suggests a troubling detachment from the reality of the conflict on the ground.

Friedman is the President of the American Friends of Beit El Institutions organization, a non-profit that raises some $2 million per year for the Beit El settlement. Significant portions of the money raised go to the yeshiva (Jewish religious school) in Beit El, headed by Rabbi Zalman Melamed. Rabbi Melamed has stated that evacuating settlements is a sin against Jewish law. During the Israeli withdrawal of its settlements from Gaza in 2005, Melamed even went so far as to call on soldiers to disobey orders to evacuate settlers.

Friedman, then, is not just a supporter of settlement expansion, but of the most radical elements in the settler movement. If Friedman’s nomination is an indication of Trump administration policy on Israel-Palestine, the United States is going to deepen the conflict in which Israelis and Palestinians are embroiled. This risks seriously damaging US interests in the region, further violating Palestinians’ basic human rights, and compromising Israeli security.

Mitchell Plitnick is vice president of the Foundation for Middle East Peace.