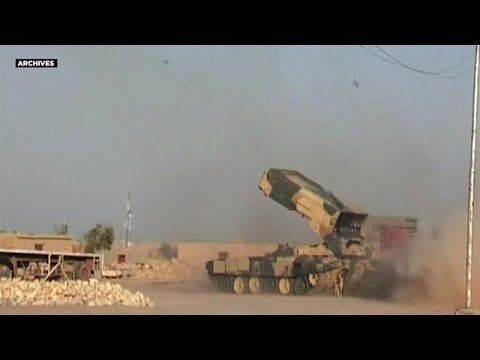 The border of Syria and Iraq looks likely to be the next testing ground for the newly conciliatory – yet unsteady – relationship between Iran and the US. Various powers are already jockeying for position on the frontier.

As the fight against the extremist group known as the Islamic State continues to succeed, albeit at a slower pace than hoped for, the Iraqi government is starting to consider what to do about the country’s borders with Syria. To the west of Mosul, for example, the borders have been porous, allowing fighters from the extremist group to come and go between the Iraqi city of Mosul and the Islamic State, or IS, group’s base in Syria, the city of Raqqa.

As the IS group is pushed out of the eastern side of Mosul this week, questions remain as to what will happen to IS fighters on the western side of the city; many believe they will leave on roads that lead toward the Syrian border. Assuming the remaining fighters from the extremist group eventually flee the city and head toward Raqqa, and if the Syrian-Iraq border is not secured somehow, then it is clear that the city of Mosul and the surrounding areas can never be completely safe.

The main problem is: Who will do the securing?

The border area has political significance. It is highly likely that Iran would like a land corridor connecting it to long-time allies in Syria.

The Shiite Muslim militias, formerly volunteers but recently classified as a legitimate force by the Iraqi government, fighting the IS group are developing plans to guard this border. Many of these militias receive support, in terms of finances and training, from the Iranian government.

Meanwhile the US has also been encouraging Sunni Muslim tribes in the area to launch operations in the border areas too, underscoring the military importance of the area.

When the battle to re-claim Mosul and surrounds from the IS group began, there were strong reservations about how the Shiite Muslim militias could participate. Generally, it was thought they shouldn’t be involved inside the city, which is populated mostly by Sunni Muslims. Instead the Shiite Muslim militias headed towards the nearby town of Tal Afar, which sits just east of the Syrian border.

In November 2016, Iraq’s Prime Minister Haider al-Abadi said during a press conference that the Iraqi-Syrian border needed special security in order to prevent extremist fighters from returning to Iraq. A delegation was sent to Syria to discuss this with the government there.

Several Shiite Muslim militias said they were ready to do the job of guarding the borders. The Badr organization, which is known for its close ties to Iran, was particularly keen.

“Guarding the borders here is important to stop the IS group’s supply route,” Razzaq al-Hayderi, an MP from the Badr organization, told NIQASH. “The militias can help the Iraqi military and security forces achieve this goal because they are trained in fighting the extremists.”

During his visit to the Iranian capital, Tehran, last week, Iraq’s former prime minister, Nouri al-Maliki, who is known to have close ties both with the militias and with Iran, suggested that the Shiite Muslim militias cross the Syrian border and help eliminate the IS group there too.

As yet, the current Prime Minister al-Abadi, has not given the Shite Muslim militias either of these responsibilities.

Additionally, there is a lot of border to defend – around 600 kilometres’ worth – and much of it goes through rugged desert. There are only three proper crossings. One at Al Qaem, which is held by the IS group, one at Rabia, which is controlled by the Iraqi Kurdish military and one at Waleed, controlled by the Iraqi army. When the IS group declared that it was founding its own country in August of 2014, the group announced that the old borders were obsolete and that there was no more difference between Iraq and Syria in this area. Since then the Al Qaem area has become a conduit for weapons, supplies and manpower.

The conflict as to who controls the Iraqi-Syrian borders is only just starting. Further debate will arise after the city of Mosul has been freed.

Last Thursday, the Sunni Muslim tribal fighters of Anbar province announced that they were launching a military operation in the border areas near them, to push the IS group out of the last remaining towns they are in. These are Anah, Rawa and Al Qaem, with the last being a particularly important stronghold for the IS group.

The tribal fighters said that the operation was coordinated by the Iraqi government and that US forces from the nearby Ain al-Asad military base, also assisted them.

“A joint force consisting of more than 2,000 fighters along with forces from the [Iraqi army’s] 7th Division, launched a surprise attackon Anah,” Omar al-Mahalawi, one of the fighters from Anbar, based in Haditha, where the operation was launched from, confirmed. “It was a secret plan and was not announced, so that the IS fighters didn’t have any time to prepare.”

Senior US military officers helped to coordinate with the operation and preparations took place at Ain al-Asad military base, al-Mahalawi noted. “The US forces gave the Iraqi army and the tribal fighters important intelligence about where the IS fighters were and their planes also provided air support. There were even US special forces troops participating,” al-Mahalawi said.

Over the past weeks, US air support had mainly been centred in western Anbar but over the past few days, the strikes have increased and have helped progress toward Anah and further down the road leading toward the border and Syria.

The conflict as to who controls the Iraqi-Syrian borders is only just starting. Further debate will arise after the city of Mosul has been freed of all IS fighters. It is quite possible that certain strips will be controlled by certain parties.

The fight over Anbar’s borders won’t progress much until the town of Al Qaem is back under the control of the Iraqi government. Al Qaem is the lesser-known headquarters for the IS group, where many of its leaders are based, where it receives foreign recruits and where it has its largest explosives-manufacturing factory. There has been no fighting near Al Qaem for nearly two years.

“The battle for Anah and Rawa will be easy compared to that for Al Qaem,” a senior military officer told NIQASH – he requested anonymity as he was not authorised to comment to media. “We expect the extremists to fight there just as fiercely as they are now fighting in Mosul.”