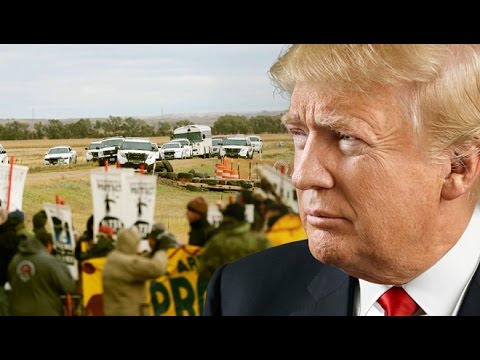 The decision comes as a blow to environmentalists and Indigenous groups opposing the controversial projects.

Trump’s signature has left Indigenous groups and environmentalists fuming but determined to carry on their struggle against the projects, which critics say will destroy local ecosystems and damage Native American sacred sites while locking the United States into a future dominated by fossil fuels.

The move is seen as a stark example of Trump’s unequivocal support of the oil industry as he aims to boost the U.S. economy and the job market by restoring dirty industries and backing protectionism for U.S. manufacturing.

Trump said that the “we are going to renegotiate some of the terms” of the Keystone XL pipeline and that the Dakota Access pipeline would be “subject to terms and conditions negotiated by us.” The president said that pipelines would create thousands of jobs and “will put a lot of steelworkers back to work.”

Since April 2016, protesters started occupying camps in opposition to the 1,172-mile Dakota Access Pipeline. In December, the U.S. Army Corps of Engineers ordered to halt the construction of the project close to the reservation of the Standing Rock Sioux Tribe. Last week, the tribe ruled that demonstrators have until Feb. 19 to leave the occupying camps.

After a lengthy campaign from environmentalists against the Keystone XL, which was set to transport oil from Canada to the U.S. Gulf Coast, the project was rejected by former-President Barack Obama in 2015.

During a meeting with U.S. auto companies for his plan to boost local production by relaxing regulations and Trump claimed that “environmentalism is out of control.”

Environmental groups have signaled that Trump’s move will be met with renewed resistance.

“Trump clearly doesn’t know what he’s doing,” said Bill McKibben from environmental group 350.org. “Indigenous peoples, landowners, and climate activists did everything in our power to stop Keystone XL and Dakota Access, and we’ll do it again.”

“These orders will only reignite the widespread grassroots opposition to these pipelines and other dirty energy projects,” he added. “Trump is about to meet the fossil fuel resistance head on.”

“Both the Keystone XL and Dakota Access Pipelines will never be completed, no matter what President Trump and his oil-soaked cabinet try to do,” said David Turnbull, campaigns director at Oil Change International.

“A powerful alliance of Indigenous communities, ranchers, farmers, and climate activists stopped the Keystone and the Dakota Access pipelines the first time around, and the same alliances will come together to stop them again if Trump tries to raise them from the dead,” said Greenpeace Executive Director Annie Leonard.

“Trump’s decision to give the go-ahead for the Dakota Access Pipeline is a slap in the face to Native Americans and a blatant disregard for the rights to their land,” said Jamil Dakwar, director of the ACLU’s Human Rights Program.

The Standing Rock Sioux Tribe has not yet made a statement on the president’s order.

While Trump has boasted that the pipelines will boost jobs, others are skeptical and believe that the numbers of positions will be well below what Trump claimed.

On Tuesday, Trump also signed an action to fast-track environmental reviews and approvals of infrastructure projects. Since being inaugurated as president on Friday and being the catalyst of worldwide women led protests Saturday, Trump has already used executive powers to scrap the Trans-Pacific Partnership free trade deal and to ban U.S.-funded organizations around the world from providing abortion services, and even discussing abortion with clients.