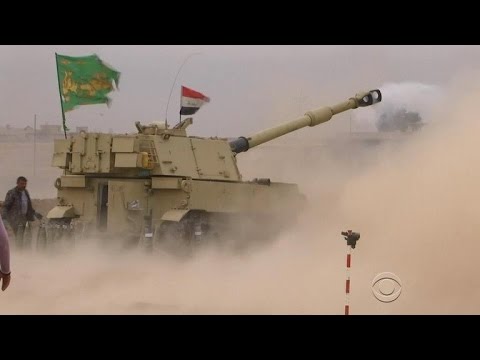 Since his inauguration, Donald J. Trump has not been making a good impression in Iraq, where the US has 6,000 troops, according to al-Zaman (The Times) of Baghdad.

The prime minister has forcefully rejected Trump’s talk of “taking Iraqi oil.” And the Shiite clerical leader, Muqtada al-Sadr, has taken on Trump over his plan to move the US embassy to Jerusalem.

The pan-Arab London daily al-Hayat (Life) reports that Iraqi Prime Minister Haydar al-Abadi of the Shiite fundamentalist Da’wa (Islamic Call) Party angrily riposted to Donald Trump’s repeated statement that the US should have “taken” Iraq’s petroleum while it was occupying that country. He said yesterday, “We can’t understand what he means. Does he mean that the US should have occupied Iraqi oil in 2003 so that Daesh [ISIS, ISIL] could not gain control over that oil?” He added, “According to the Iraqi constitution, Iraqi petroleum belongs to Iraq.”

At the same time, al-Abadi expressed pleasure at Trump’s assurance that US military aid to Iraq for its fight against Daesh would not only continue but be substantially increased.

While al-Abadi seemed deferential if a bit outraged and deeply puzzled by Trump’s pronouncements, al-Zaman reports that hard line nationalist Shiite cleric Al-Sadr said, in response to the plans to move the US embassy to Jerusalem, that it constituted “an open declaration of war against Islam, in a manner greater than ever before.” He added, “If it happens, it will necessitate the creation of a special brigade to liberate Jerusalem.” It is expected that Sadr will issue a detailed statement with regard to this brigade at a later time. If the US moved its embassy to Jerusalem, it would constitute an explicit recognition of that disputed city as the capital of Israel. Al-Sadr called on the Arab League either to dissolve itself or to make a sincere stand to prevent this naked aggression. He also called on the Organization of the Islamic Conference to likewise make a forceful stand rather than only issuing a symbolic statement. Any other course of action, he said, would result in its demise as an organization. (The Organization of the Islamic Conference is a regular meeting of the foreign ministers of dozens of Muslim-majority countries, with other sorts of exchanges on the side).

Al-Sadr called on the Muslim-majority nations to close the US and Israeli embassies and demanded in particular that the US embassy in Iraq be closed immediately. He warned that if the Middle East does not make a stand now, it will be fateful for the region’s relationship with the United States. He warned that Trump was reneging on his pledge not to intervene in the affairs of other nations, and that he was explicitly putting forward the slogan of “America First.”

The dark clouds gather on what should otherwise be a good news day for US-Iraqi relations. US military support has been crucial in the liberation of most of East Mosul from Daesh (ISIL, ISIS) by the Iraqi Army and its Kurdish and Shiite allies. Just yesterday, the US embassy in Iraq had congratulated the Iraqi government on the achievement in East Mosul praising the bravery and sacrifices of the Iraqi Army and the Counter-Terrorism Brigades, the Federal police, the Kurdistan Peshmerga or national guard, and all the military formations of Iraqi security (a euphemism for Shiite militias). The US embassy added, “The United States wishes to express its continued support for Iraq in its struggle to liberate all of its territory from this terrorist gang.”

The news of the plan to bar Iraqis from getting visas to come to the US has, according to CBS provoked anxiety and puzzlement in the Iraqi troops who are fighting alongside US troops. “Why would you ban us? We are the victims. In fact, American ISIS fighters have come here.” His commanding officer said it wouldn’t be right for the US to ban Muslims, and would contravene America’s role as a multi-ethnic country. Yep, a real morale booster for the alliance against Daesh.

When most of the Sunni Arab west and north seceded from Iraq in 2014, acquiescing in rule by extremist Sunni Daesh and its phony caliph, Abu Bakr al-Baghdadi, the Shiite-dominated government of Haydar al-Abadi sought the help of the Obama administration in liberating Iraqi territory from the terrorist organization. Obama gave Iraqi forces, including Shiite militias allied with Iran, air support, and over time sent 6,000 troops to Iraq to provide training and help with planning and logistics. When the fight for Mosul bogged down in December, it was these US troops who helped Iraqi field officers refine their strategy. The Iraqi army and its militia allies have now taken about half of Mosul, the last major Iraqi city in the hands of Daesh.

For there to be severe friction between Iraq and the US at this point, because of Trump’s tweets, deeply endangers the US troops in that country and de facto gives aid and comfort to ISIL.