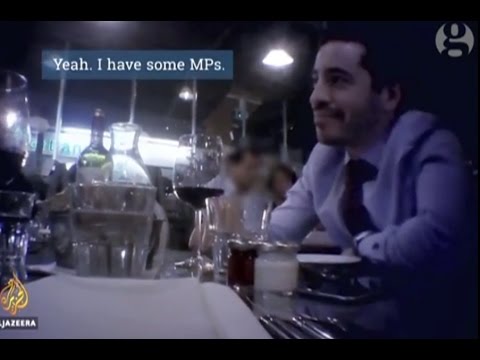 Washington is obsessed by the story put out by US intelligence agencies that Russia tried to interfere in the US presidential election. But for reasons of self-preservation, the blockbuster story just hitting the headlines that an Israeli operative was plotting to get up scandals to unseat British members of parliament will sink like a stone. This, even though part of the concern voiced by official Washington is that Putin may target the elections of European democracies allied to the US to push them in a right wing direction. That’s exactly what the right wing Likud government of Israel has been caught planning to do to Britain.

Ian Cobain and Ewen MacAskill of The Guardian report on undercover footage taken of Shai Masot, a “senior political officer” in the Israeli Embassy in London who has been an officer in the Israeli Army and still is employed there. I conclude that he is likely Israeli military intelligence with a cover at the embassy.

Masot is overheard in the video discussing plans to politically ruin members of parliament, including foreign office minister Sir Alan Duncan, who wants to see a Palestinian state established.

One of the people in the tape, Maria Strizzolo (a civil servant and aide to a Conservative Member of Parliament or MP), boasted that she had helped her boss, MP Robert Halfon, rise in politics.

Masot asked her if she could also demote politicians. “Can I give you some MPs that I would suggest you would take down?”

She replied, “Well, you know, if you look hard enough, I’m sure that there is something that they’re trying to hide.” In case Masot did not get the point, she later added “A little scandal, maybe.” A third person in on the conversation, one “Robin,” was supposed to be from “Friends of Israel” but was actually an investigative reporter from the Qatar-based Aljazeera, who made the recording.

Masot says, “I have some MPs.”

Masot gets coy. “No, she knows which MPs I want taken down.”

Masot names the Deputy Foreign Minister [Sir Alan Duncan] (equivalent in the US to an Undersecretary of State).

Strizzolo asks, “You still want to?” This question shows that Strizzolo has discussed the possibility of creating a scandal around Duncan with the Israelis before.

The question arose whether Duncan had already been disciplined and tamed. Masot demurred. “No, he’s still doing a lot of problems.”

The video comes in a film claiming to expose the way that the Israeli government has ‘infiltrated’ both the Conservative and Labour parties via its embassy in the UK, using secret cash and covert support.

The longer Aljazeera report also catches Masot telling Joan Ryan, a senior Labor member of parliament that he he has gathered more than one million British pounds ($1,229,000) to bring cooperative British Members of Parliament to Israel.

Masot in some of the footage calls Labour leader Jeremy Corbyn “crazy” and dismisses his supporters as “weirdoes.”

I’ve always wondered why American politicians are mostly so timid and intimidated by the Israel lobbies. The US Congress is so out of line with regard to the opinions of the rest of the world about the illegal Israeli colonization of the Palestinian West Bank that it is like something out of a science fiction movie. (Of course, our Congress did also vote resolutions in support of Afrikaner colonial racism in South Africa, which was also bizarre).

It isn’t a matter of the American Jewish community, which is more liberal than Americans as a whole and mostly quite powerless. The Israel lobbies often operate in opposition to the polled opinions of Jewish Americans, and often has no more relationship to ordinary Jews than the ExxonMobil lobby has to Americans who drive gasoline-fueled cars. Lobbies are about power for a minority within a minority.

The usual answer is that the Israel lobbies are well-heeled and give a lot of money to political campaigns (as much as 30% nationally), and few politicians want to risk the possibility that they might throw their funding to the other candidate. The Israel lobbies sometimes lose (they lost the fight on the Iran deal, at least the first round) and don’t by any means control things.

But Israeli intelligence operations against politicians are also a threat, and evidence for how exactly such efforts are pursued has just emerged. It is highly unlikely that the Israeli embassy in Britain was behaving in an unusual way, and I think we may conclude that such conversations are common in the capitals of important democratic countries, including the United States.

But this interference, unlike that of Russia, will provoke no national outrage or even be covered in any serious way by US television news. This silence will not be because the subject is unimportant.