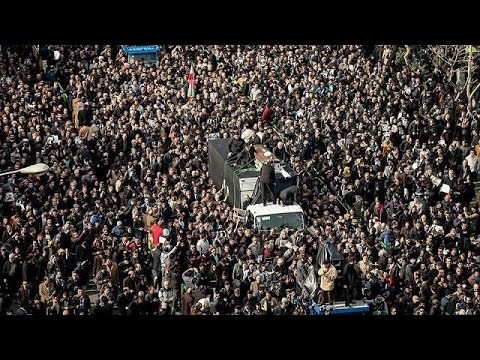 Hashemi-Rafsanjani, usually referred to just as Hashemi, was one of the active opponents of the monarchic regime and one of the founding fathers of the new republic. No one else in Iran had occupied so many influential revolutionary posts as Hashemi.

He was born in Bahraman, a small village near Rafsanjan in Kerman province, one of nine children of a relatively well-off pistachio farmer. He was only 14 when he left his village for Qom to study in a religious seminary, and he studied with a number of leading clerics, including a fiery cleric who later led the Islamic revolution, Ruhollah Khomeini. In his youth, Hashemi took part in anti-Shah activities and was allegedly arrested seven times by the Shah’s secret police SAVAK and altogether spent four years and 5 months in jail.

He played an active role during the revolutionary upheaval, and shortly after the victory of the revolution Khomeini appointed him a member of the Revolutionary Council. He survived an assassination attempt by the terrorist group, the Mojahedin-e Khalq Organization (MKO), in a massive blast in 1981.

After Saddam’s invasion of Iran in September 1979, Hashemi was appointed commander in chief of the military, and he was the person who was actually running the war. When Iraqi forces were kicked out of Iran in 1982, most moderate politicians were in favor of ending the war, but Khomeini insisted that the war had to continue until Saddam was removed from power. In the end, it was Rafsanjani who convinced Khomeini to stop the fighting, saying that Iranian forces were not capable of continuing the war any longer. Finally, Khomeini accepted UN Resolution 598 in August 1988 that ended the war.

Hashemi was a key Iranian interlocutor in what came to be known as the Iran-Contra scandal of the mid-1980s, with its backdoor arms-for-hostages deals with the US that were encouraged by Israel and that tarnished the Reagan White House.

Hashemi was elected to the Iranian Parliament, the Majles, in 1980 and re-elected for six terms, two of them as Majles speaker. He was also a member of the influential Assembly of Experts that was in charge of selecting the supreme leader, from 1983 till his death, serving as its chairman from 2007 to 2011 when he was forced to relinquish the chairmanship due to his support for Mir-Hoseyn Musavi and the Green Movement in the 2009 presidential election. His support for the Green Movement increased his popularity among the people, and in the last election for the Assembly last year he received the highest number of votes in the country.

In 1988, when differences between the Majles and the Guardian Council, that was in charge of ratifying Majles legislation intensified, Khomeini formed the Expediency Council to arbitrate between the two and to have the last word in the dispute. Hashemi was appointed a member at its inception and he continued to be its chairman until his death. This gave him an influential position in the Islamic Republic, although during the last few years Ayatollah Ali Khamenei appointed many of his cronies to that body, including former president Mahmoud Ahmadinejad and Sa’id Jalili, chief nuclear negotiator under Ahmadinejad and one of the country’s most high-profile hardliners.

Shortly before his death, Khomeini set up a body to revise the constitution, which abolished the post of prime minister and replaced it with an executive president. After Khomeini’s death when Khamenei was elected as Supreme Leader, Hashemi was elected president, and he started to rebuild the country after the devastation of the eight-year war with Iraq, giving him the title of “Commander of Reconstruction”.

During his two terms as president and subsequently, Hashemi was a pragmatist and was genuinely in favor of interaction with the West, believing that the Islamic Republic could only survive if it gave up some of its revolutionary fervor. Unfortunately for him, his overtures to the West did not produce a positive response.

For instance, he helped free Western hostages in Lebanon, in return for Western support. According to Professor Gary Sick who served on the US National Security Council under President Carter, “The Americans promised that if the Iranians got the hostages out, the Americans would cooperate with Rafsanjani more closely than they had in the past and that they would begin to end the hostility between the two countries.” He goes on to say: ““Rafsanjani kept his promise. He actually got the hostages out. But it came just as George H.W. Bush was engaged in another election campaign. He couldn’t keep his promise, and he was defeated in that election. And the Clinton administration wasn’t the least bit interested in pursuing it. That was probably one of the greatest disappointments of Rafsanjani’s political life.” [https://iranwire.com/en/features/4294]

Hashemi offered the US firm Conoco the first oil contract to a foreign company since 1979, a major $1 billion deal to develop offshore Iranian oil and gas fields, only to be punished with new sanctions by the Clinton administration.

After Saddam’s invasion of Kuwait, Hashemi persuaded the Iranian establishment to support the West’s campaign to oust Saddam from Kuwait. Instead of being rewarded for his tilt towards the West, the Clinton Administration introduced its “dual containment policy” imposing more sanctions on Iran, and in 1995 declaring a near-total embargo on US trade with, and investment in, Iran.

In 2005 presidential election, Hashemi declared his candidacy, vowing to “play a historical role, to stop the domination of extremism.” He spoke of his destiny “to serve the revolution until the last day of my life.” However, he suffered a humiliating defeat against the populist hardliner Mahmud Ahmadinezhad who was supported by Ayatollah Khamenei.

In the 2009 election, Hashemi supported the Reformist candidate Mir-Hoseyn Musavi and the Green Movement, but in a rigged election Ahmadinezhad was declared the winner and Hashemi and his family became the targets of attacks by hardliners. He was forced to give up his chairmanship of the Assembly of Experts. He was prevented from preaching sermons at Tehran Friday prayers, a position that he had held for many years. His son Mehdi and his daughter Fa’ezeh were jailed partly due to their support for the Green Movement.

In 2013 once again he declared his candidacy for the presidential election, but the Guardian Council disqualified him from running. So he and the former Reformist President Mohammad Khatami put their support behind Hassan Ruhani who won the election in the first round.

Hashemi’s death will be a blow to moderate and reformist politicians in Iran, because he was someone on whom they could count. However, although his absence might embolden the hardliners during the lead up to the next presidential election in May 2017, ultimately it may encourage the Reformists to take the matter into their own hands and push for real reforms. His death might expedite the battle that has to come sooner or later between the Reformists backed by the vast majority of the people and the hardliners. It would be good if President Rouhani could lead that battle, although he lacks Hashemi’s charisma.

Indeed, Hashemi’s funeral has already provided an opportunity for massive demonstrations, with anti-regime and Reformist slogans being chanted by those who took part in his funeral, which some officials have estimated at over two million. [http://www.payvand.com/news/17/jan/1053.html]

Among the slogans that were chanted by the mourners were “Our message is clear: House arrests must end” (referring to the house arrest of Mir-Hossein Musavi and Mehdi Karrubi, the two Reformist candidates in the 2009 election). When the loudspeakers were trying to drown out the slogans of the people with calls of Allah-o Akbar (God is great) the shouts of the people rose higher with the refrain “O Hossein, Mir-Hossein”, and “Loudspeakers are yours; the voice of justice is ours!” [https://twitter.com/Vahid/status/818740720014159872]

This shows that the desire for change and reform in Iran is as strong as ever and that people seize any opportunity that they get to express their opposition to the hardline policies of the clerical regime. Under these circumstances, the least helpful step by foreign powers, including the incoming U.S. Administration, would be to try to interfere in Iran’s domestic policies. Any sign of foreign interference will provide an excuse to the hardliners to describe the movement of the Iranian people as being inspired from outside, and would also unite Iranians behind the mullahs. The Iranian people should be trusted to take charge of their own destiny, with some moral support for outside.