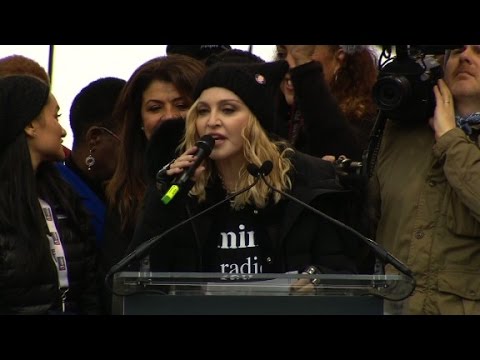 About 1 million women and their supporters demonstrated in Washington, D. C. on Saturday, but many millions more rallied in cities like New York, Chicago, Los Angeles and Atlanta and in small towns like Ann Arbor, Michigan, as well as in cities around the world. The target of their ire? Predator-in-chief Donald J. Trump.

Women are right to be extremely worried about what the new administration intends to do to them (quite apart from what the president says he does to them all the time). The Hill reports that the Trump budget may well slash Federal funding for the 25 programs that grew out of the Violence against Women Act.

Claire Landsbaum, writing in New York Magazine, pointed out that in the decade after the act was passed in the early 1990s, the rate of domestic violence in the US plummeted by 64 percent. So Trump may in essence be arranging to allow thousands of women to be beaten with impunity every year.

While it has been widely noted that on his first day in office Trump signed an executive order that could stop enforcement of the health insurance mandate (which fines healthy young people if they don’t buy insurance, since if they don’t, it becomes crushingly expensive for the middle-aged and elderly).

But what is not often noted is that the Affordable Care Act (ACA) has provisions that eliminated differences in premiums between what was charged to women (more) and to men (less) in “the individual and small-group insurance markets.” It also “required coverage of recommended preventive services and maternity care.” It mandated that employers pay for birth control for women, a provision that evangelical and Catholic employers strongly resented, and which would be repealed along with the rest of the law. That is, repealing the ACA could injure the health of millions of women in an unfair way, hurting them more than the repeal hurts men. Not to mention that millions of women will lose their health care insurance entirely.

Although, as Bridgette Dunlap writing in The Rolling Stone correctly points out, it is a little unlikely that Trump through his Supreme Court picks could overturn Roe v. Wade entirely, he could so water it down as to make it almost impossible to get an abortion in some states. Texas attempted to place undue burdens on abortion clinics, an attempt that was struck down. But if Trump gets three or so nominations to the court, the justices could decide instead to allow what Texas did. Texas was down to a handful of clinics in the whole state that perform the procedure, and most working class women couldn’t afford to travel to a clinic. For them, Roe v. Wade was de facto overturned, and they faced a choice of bearing a child they did not want (some 17,000 cases of pregnancy by rape are reported annually in the US) or of having a coat hanger illegal abortion that threatened their lives. A SCOTUS dominated by Trump-Pence nominees could reverse itself and let Texas and other states violate women’s 5th and 14th amendment rights.

Trump’s nominee for Attorney General, Jeff Sessions, indicated in his testimony before the Senate that he would not let the Federal government get involved in prosecuting hate crimes against women or gays, where these crimes were already being prosecuted in local jurisdictions. Sessions actually said, “I am not sure women or people with different sexual orientations face that kind of discrimination. I just don’t see it.”

These administrative and legal changes proposed by Trump or his cabinet nominees will inflict harm on millions of American women. But Trump’s own behavior toward women demeans them, and a president has enormous powers to influence people. The status of American women has fallen just because Trump was elected.