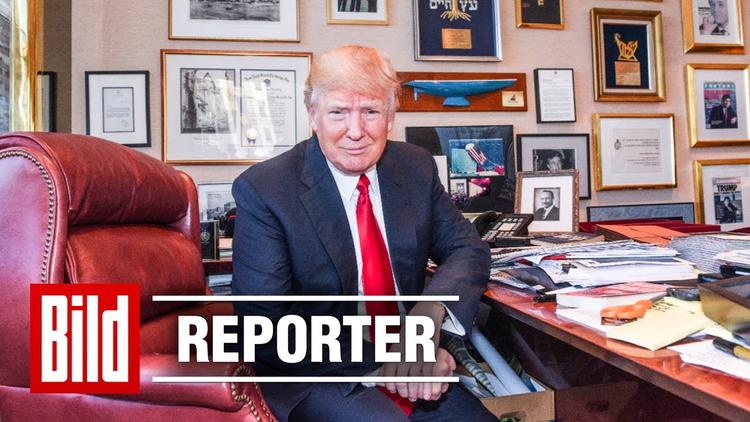 Donald Trump picked a fight with almost everyone but his buddy Vladimir Putin this weekend. His continued tweaking of China over its claims on Taiwan produced a sharp rebuke from Beijing. John Brennan, head of the CIA, pushed back against Trump’s branding of the agency as a Nazi institution after the golden shower Russian dossier on him was leaked.

Trump gave an interview Monday with the German publication Bild in which he rampaged around like a bull in a China shop, insulting Chancellor Angela Merkel over her immigration policies, threatening BMW with a trade war, putting Merkel and Putin on the same plane with regard to his respect for them, dismissing NATO as outmoded, harming investment, and putting a scare into Eastern Europe that he’ll abandon them to Putin the way he seems to have acquiesced in the aggression on Ukraine. (See the interview, linked at the bottom of this page, which is in English with German subtitles).

Trump also went again after the Bush administration and his own Republican Party, calling the decision to invade Iraq in 2003 the worst foreign policy decision that the US ever made. “It was like,” he exclaimed, “throwing stones at a beehive.”

Asked whom he respected more, Merkel or Putin, Trump said “both.” Merkel is a treaty ally of the United States. Putin is a frenemy.

Trump said he likes Germany and respects Merkel, but that he disagreed with her decision to admit large numbers of what he called “illegals” from Syria (he then backed up and said he didn’t know where they were from because they weren’t vetted), and suggested that the decision opened Germany to more terrorism. He also dismissed the European Union as a German project, hinting that it was some sort of money-making scam for Berlin, and complained about a chronic US trade imbalance with the EU, which he said “is going to stop.” In November, the US exported $21 billion worth of goods to the EU countries and imported $34.8 billion. Trump shrugged and indicated that he didn’t care if the EU survived or not, since he saw it as a means for Germany to gain unfair trade advantages over the United States. Trump doesn’t understand macro-economics or the function of a trade deficit over time.

Merkel replied curtly, “I think we Europeans have our destiny in our own hands.” She also said that while the issue of terrorism is a great challenge for everyone, it is a separate question from that of immigration.

Several terrorist attacks by Muslims in Europe have actually been carried out mainly by European-born individuals, mostly petty criminals. A recent attack by truck was perpetrated by someone whose asylum application was rejected but who went into hiding. It wasn’t as though he were unvetted.

Most terrorism in Europe in the past decade has been carried out by separatists or far-right groups, not by Muslims.

Trump again slammed NATO, demanding that European countries pony up more funds for it and stop freeloading off the United States. The Bild interviewer tried to get him to understand that this sort of talk was spooking the new eastern European members of NATO. Trump said he knew what was going on, but he declined to back down from his attack.

He also went after BMW, which is building a big new auto plant in Mexico. Trump warns that they won’t be allowed to export those cars to the US unless they pay a 35% tariff.

This threat caused BMW stock to drop 2.2% at some points Monday, leveling off at 1%, representing a lost of billions of dollars. Finance specialists warned that Trump is creating an atmosphere in which investors are jittery and putting off investing, which could slow economic growth. They also point out that the US is a member of the World Trade Organization, which would certainly not allow the abrupt imposition of a big new tariff on goods coming in to the US from Mexico. Further, were Trump to follow through on his threats, Germany would retaliate with its own tariffs, which could push the fragile world economy into a Depression.

As for the refugees given asylum in Germany, they are not “illegals.” Human beings cannot be “illegal,” for one thing. But the immigration to Germany has typically been through legal channels, and those denied asylum are leaving in ever greater numbers. Germany accepted about a million asylum seekers in the past two years.

Germany’s population has been declining and was expected to spiral down from 82 million to 60 million by 2050. This decline threatens the ability of elderly Germans to receive government services, since there are so many fewer workers in the next generation and they cannot generate the same amount of tax returns to the state as did the previous cohort. In part, Merkel’s decision to let the asylum-seekers in was taken out of charity, but she and her team may also have calculated that the immigrants who brought skills (the majority) could contribute to the economy over time and slow the country’s population decline.

The German Interior Ministry revealed that some 280,000 migrants applied for asylum in 2016. Germany only admits about half of the applicants to full refugee status. Some 70,000 of those rejected have returned home in the past two years. The largest groups of applicants are Syrians, Afghans, Iraqis, Iranians, Eritreans and Albanians.

The US admits roughly 1 million legal immigrants and 70,000 asylees annually, so that Germany’s applicants for the past year are exactly proportional to the numbers actually processed by the US, since it is 1/4 as populous. That is, Germany is just behaving more like the US recently, not doing something unheard of, as Trump (who deeply dislikes immigrants from anywhere to anywhere, apparently) said.

The 890,000 asylum applications received by Germany in 2015 are therefore something extremely unusual. That situation derived from a crisis of immigration across the Mediterranean, in which many lives were at stake (some 5,000 attempted immigrants died on the sea last year). In addition, however, it now seems clear that people smugglers set up shop in Turkey and flooded immigrants into Europe, with its open borders, for a fee, taking advantage of the sympathy of the European public for the boat people. Turkey has made an agreement to police its own borders better (and likely to crack down on these coyotes) in return for a payment of $3 billion from the EU. While Europe clearly needs to do something about its border security, Merkel’s act of compassion and of population policy will certainly benefit the German economy and German dynamism over time. Trump is wrong.