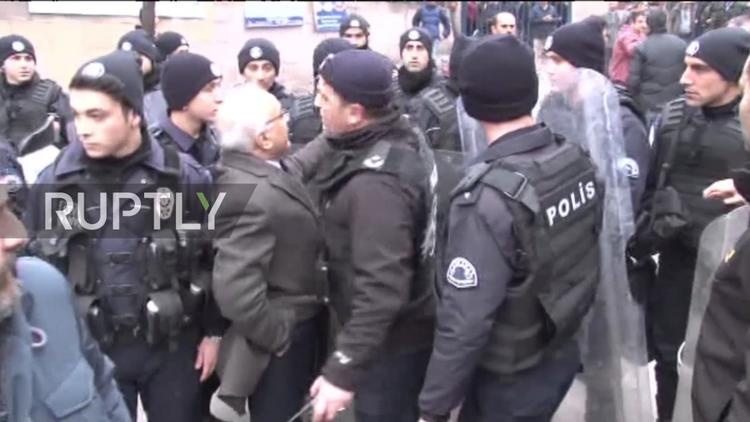 Feminist critiques of political power reveal the central function of gender, sexuality, and difference in maintaining that power. Yet, in current events, a feminist geopolitics is rarely considered and has been absent from analysis of the 2016 coup attempt and its aftermath in Turkey. Much more than tallying the number of women who participated in protesting against the coup, a feminist approach reveals the ways in which the coup attempt (and responses to it) in Turkey relied on the exercise of masculine discursive and material power. Violence was both engineered by a powerful institution, the Turkish military, as well as opposed by the political power of the AKP backed by other state institutions such as the police and gendarme. Both coup plotters and their opponents played a significant role in constructing and symbolizing normative masculinity and heterosexuality. The eruption of violence reinforced the hegemonic relationship between the military, the state, and the nation.

Feminist critique reveals that under President Tayyip Erdoğan’s leadership, the AKP government has taken increasingly repressive and alarmingly authoritarian measures against minorities, women, and girls, and has galvanized a populist nationalist masculinity that Erdoğan himself embodies. The crowds of civilian men, police officers, and anti-coup soldiers who fought against the putschists, sometimes without any weapons, also legitimate and embolden a nationalist masculinity built on religious and social conservatism and populism.

The stepping up of its war against the Kurds is part of the government’s attempt to reestablish its nationalist and patriarchal power. Despite the magnitude of horror and human cost of this war, it could be thought in connection to a regulation for the chemical castration of sex offenders and the ‘rape’ bill proposal introduced in November 2016 (that would have absolved rapists who marry their victims under 18 years of age from any criminal punishment but met with huge demonstrations and did not secure enough votes to pass). Without attending to the bolstering of this masculinist power in the streets and in government, analysts miss a crucial dimension of how a political environment of fear and intimidation has been legitimated and how violence and militarization have recast Turkish subjects.

The coup attempt on 15 July 2016 was unexpected but not entirely surprising given Turkey’s history. What was surprising was what happened afterwards. Following Erdoğan’s call to defend democracy over a FaceTime call broadcast live on television and constant prayer calls from minarets, people in huge numbers poured out to the streets, breaking the curfew. Although some women were present, the overwhelming majority were men. The civilian men joined the police and anti-coup soldiers to fight against the putchists. Waving Turkish flags and shouting “Ya Allah, Bismillah, Allahuekber”, they attacked soldiers and tanks.

By the following morning it was clear that the coup attempt had failed. 241 people were killed and more than two thousand were injured during the coup. Crowds came out to occupy public squares to celebrate the defeat of the putschists in ‘democracy vigil’s that continued for weeks. The people who attended these democracy vigils did not seem to fully support democratic ideals and norms, asking for the immediate hanging of all the putschists and declaring unconditional loyalty to Erdoğan’s leadership.

The Turkish government’s reaction to the coup attempt has also been to the detriment of an already deteriorating democratic environment in which freedoms and rights of most citizens, mostly importantly of women and minorities have been increasingly restricted. Initiating a familiar re-militarization of society, the AKP government quickly and violently acted to restore its masculinist power, repressing any expression of difference from its normative Turkish citizenship. It declared a state of emergency which persists and strengthened its grip on power through arrests, purges, travel bans, and property seizures. The initial targets expanded from coup plotters, supporters, and anyone associated with Fethullah Gülen’s hizmet movement, which the government alleges masterminded the coup, to all critics of government policies, especially its war against the Kurds. Hundreds have been detained or arrested; thousands have been fired from their jobs or forced to resign; over one hundred media outlets have been closed down since July. Academics who signed a peace petition, journalists who wrote anything critical of the government continue to become targets as late as February 2017.

The coup attempt and the AKP’s response to it are manifestations of masculinist political power. The aggressive, violent masculinities that the coup attempt and its aftermath bolstered constitute the architecture of a security state. Political power is never gender-neutral but works through gendered and sexual production of bodies that belong and that do not, that need protection and that are threats, and through the gendered and sexual construction of borders and territory. A feminist critique provides insights into the production of an environment of increasing consolidation of masculinist power, rhetoric of national unity, violence, and militarism. But it also shows the possibilities for building solidarities and working towards a different future built on pluralism, non-violence, and peace.

Read the Special Forum: Feminist Perspectives on the 2016 Coup Attempt and its Aftermath in Turkey here.

Banu Gökarıksel is co-editor of the Journal of Middle East Women’s Studies. The most recent issue of the journal, volume 13 and issue 1, features a special forum on Feminist Perspectives on the 2016 Coup Attempt and its Aftermath in Turkey.

Reprinted with the permission of the author.