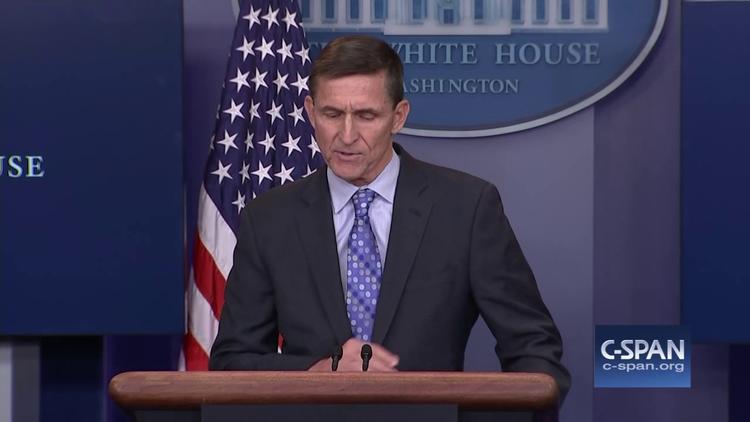 National Security Advisor Mike Flynn came out on Wednesday to make a brief statement putting Iran “on notice.” Flynn complained about Iran’s ballistic missile tests, about a Yemeni Houthi attack on a Saudi naval vessel in the Red Sea (maintaining that it was ‘Iran-backed’) and about “weapons transfers” and “support for terrorism.”

The Iranian press pointed out that that the JCPOA or nuclear deal only bans ballistic missiles designed to carry a nuclear warhead, and said that Iran had done no such thing. The ballistic missiles it has been testing don’t have warhead capability and so are not covered in the JCPOA. Visiting former French prime minister, Jean-Marc Ayrault, had affirmed the nuclear deal but warned Iran to be meticulous in observing it.

The Iranian press, at least, reported that Ayrault, now in Tehran, was not bothered by the ballistic missile test.

Although the Saudi government and his allies view the Zaydi Houthi movement of northern Yemen as an Iranian puppet, there is not very much convincing evidence of such a relationship. Rather, the Houthis are indigenous and have received, if any, very little monetary support from Iran.

Inasmuch as Trump supports Russian efforts in Syria, and inasmuch as those efforts are aided by Hizbullah, the Lebanese party-militia, Trump is de facto allied with Hizbullah. Likely that is the group to which Flynn refers when he speaks of Iranian weapons transfer.

There was no indication that Flynn had an actual war plan for Iran, and apparently the career Pentagon personnel were livid that Trump would have Flynn announce a major strategy statement on matters of war and peace, but have no specific planning in place:

CENTCOM's initial response to whether they've been notified that Iran is on notice. "Seriously?" A red line with no war plan?

Trump seems to be the opposite of Teddy Roosevelt, who is said to have quipped, ‘Speak softly and carry a big stick.’ Trump and his people speak loudly but carry a tiny stick.

Iran’s President Hassan Rouhani has already accused Trump of being an amateur and a bull in the china shop. Iran’s government has ceased issuing visas to Americans, in retaliation for Trump’s Muslim ban.

“Today is not the time for creating division. May be a person can think that he can restrict visas for a couple of months for seven countries. Well, he is an individual who is new in the political arena. He has been living in another world, now he came to the political world. This is completely new for him. It will take long before he and his associates understand what is going on in the world and what should be done. He will cause damage to his own people and possibly others. . .

“For years, they [USA] have been chanting slogans that they oppose the Iranian government, but support the Iranian people. They had been saying untrue things for years by saying one thing behind the curtains and the opposite in public. This man, [Donald Trump] who is a specific person, tore the image of hypocrisy and now is displaying [everything] they have had in their hearts.

“They are taking measures which are in particular against a number of our compatriots or Muslims from other countries. Their slogan in the world was against discrimination and they said that the age of discrimination has ended. What does this mean? This incorrect act is based on wrong and unfair discrimination. They used to say that they respect human rights; this is a violation of human rights. They used to say that they adhere to their commitments. How come your embassy has issued a visa and approved it, and now you are saying that you do not accept it and they [Muslims] are not allowed to travel to your country? They [USA] have violated all international principles and commitments. . .”

Speaking about the implementation of the JCPOA, the nuclear agreement between the P5+1 countries and Iran, Hassan Rouhani said that negotiation is the most important method to resolve problems.

Meanwhile, Russian pundits continue to entertain some hopes that Russia can mediate betwee Iran and Washington:

Izvestia: Andrei Ontikov report “Moscow to offer Trump to look differently at Iran” says that Russia intends to find a compromise on the Iranian nuclear programme with Trump’s administration. According to experts, Moscow can persuade Trump to keep Washington’s signature under the previously reached agreement on the issue as this will allow the USA to improve relations with Iran in terms of solving other important problems in the Middle East . . .