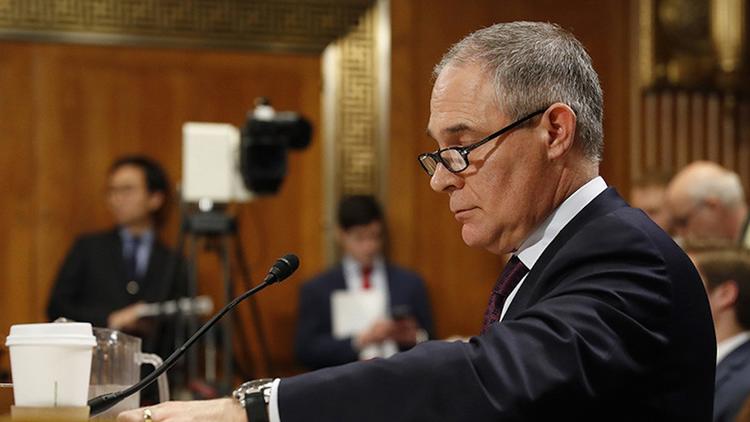 Pruitt, a suspected climate change denier, has expressed plans to roll back climate policies that regulate the fossil fuel industry.

Pruitt, a suspected climate change denier, has expressed plans to roll back climate policies that regulate the fossil fuel industry. President Donald Trump’s pick falls in line with his vision of massively downsizing the EPA’s role, or at least “leaving a little bit,” as he said during a campaign speech.

News of Pruitt’s confirmation came hours after the release of a new study reporting that sea ice around Antarctica shrunk to its lowest monthly extent on record in January. The study, released by the National Oceanic and Atmospheric Administration, adds that Antarctic sea ice extent averaged just 4.04 million square kilometers, 1.19 million square kilometers below the 1981 through 2010 average.

Freaked out? You’re not the only one. Environmental activists and politicians were immediately alarmed by Trump’s pick.

Kierán Suckling, executive director of the Center for Biological Diversity, predicted that Pruitt will be “the worst, most dangerous administrator in EPA history,” Common Dreams reports.

“We’ll be drinking dirtier water and breathing dirtier air because of this disturbing decision, and our wildlife and climate will pay a terrible price.”

Rep. Barbara Lee (Calif.) tweeted that Pruitt’s confirmation “shows once again that Republicans will deny climate change and protect the interests of Big Oil at all costs.”

You don’t have to look far to learn Pruitt’s views on the EPA and the environment.

His Oklahoma Attorney General bio page describes him as “a leading advocate against the EPA’s activist agenda.” And in 2015, he sued the EPA for an “unlawful clean power plan rule” that “threatens Oklahoma power reliability and affordability.”

Pruitt has even been accused of collaborating with corporations and lobbyists to file lawsuits against federal regulations on air pollution and fracking, the New York Times reports.

The EPA was established by former President Richard Nixon in 1970.