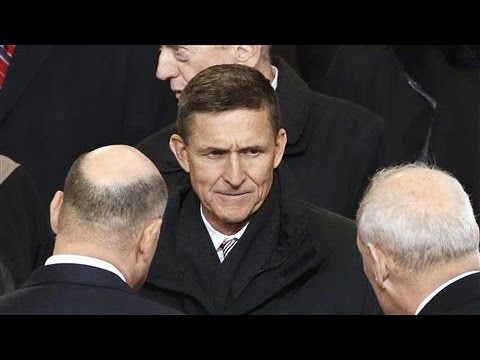 Lt. Gen. Mike Flynn (Ret.) is the National Security Adviser of President Trump. Very serious questions continue to swirl around his relationship with the government of the Russian Federation. These questions take on special significance given the alleged Russian role in interfering in the 2016 presidential election. By now, two possible criminal charges could be lodged against Flynn, both related to Russia. The first is that he took money from the Russian government, a violation of the Emoluments Clause of the Constitution. The other is that he called the Russian Embassy on Christmas Day last year and discussed the sanctions imposed on that country by President Obama over the hacking of the RNC and DNC during the election. Such a conversation would be a violation of the Logan Act.

The Washington Post reports that conversations with no less than nine intelligence officials confirm that Flynn did talk with Russian Ambassador Sergey Kislyak about Obama’s sanctions on the Russian Federation. Flynn apparently urged the Russians not to be too upset about the new sanctions suggesting that the Trump administration would revisit them. Flynn at the time was not in any government office and had no right to negotiate with a foreign power, an act prohibited to civilians by the Logan Act. Flynn must have known that the Russian ambassador’s telephone is under NSA surveillance and so it is weird to the extreme that he would risk breaking the law in public, so to speak.

It is bad enough that Flynn may have committed this breach of the law. On top of that, when questioned about these allegations he lied and said he had not discussed sanctions with Kislyak. He not only lied himself but he told Vice President Mike Pence this lie and so arranged for Pence to go on television and repeat Flynn’s lie. Flynn wasn’t under oath, so I suppose this is just a lie and not perjury. But surely lying to your boss and embarrassing him would be a firing offense?

In 2015, retired Lt. Gen. Mike Flynn, having been fired by the Obama administration as director of the Defense Intelligence Agency and then having retired from the military, flew to Moscow and attended a banquet in celebration of the “Russia Today” network, the Russian state-owned television channel. RT does some good work, but you have to keep in mind that its editorial line is set by the Kremlin. The connection to the state is even closer than in the case of the Voice of America. Flynn appears to have been paid for his appearance in Moscow, and it is possible that he was paid quite a lot.

Retired officers can be recalled and are cautioned when they retire that they should avoid such payments by a foreign government, since it violates the Emoluments clause of the Constitution (1.9:)

“No title of nobility shall be granted by the United States: and no person holding any office of profit or trust under them, shall, without the consent of the Congress, accept of any present, emolument, office, or title, of any kind whatever, from any king, prince, or foreign state.”

Retired officers of the US military, inasmuch as they are subject to recall to service, are considered to be a “person holding any office of profit or trust” under the United States. Ranking Democratic members of six Congressional committees have asked the Pentagon for an explanation. So far none has been forthcoming.

Flynn is widely thought to be somewhat unbalanced, inasmuch has he has retweeted bizarre conspiracy theories about Hillary Clinton and has said that it is rational to be afraid of Islam. (Islam is the religion of 1/5 of humankind, so this is like being afraid of Chinese food or of Indian languages). Note that Flynn served alongside Afghan and Pakistani Muslim officers and if anything appears to have been overly cozy with them (he leaked classified intelligence on terrorists in Afghanistan to Pakistani officers), so the fear-mongering is for political and maybe financial benefit. If you thought the Muslim Pakistani officers were people you should be afraid of or that they were intent on killing 80% of the world, as Flynn has alleged in other contexts, then why would you give them classified intelligence on Afghan terrorists? Flynn’s private consulting firm also took a contract from a business in Turkey with links to President Tayyip Erdogan; no rational fear there.

Surely this is the first time since the Reagan Iran-Contra scandal that National Security Council personnel have been on such legal thin ice, such that criminal charges could be filed.