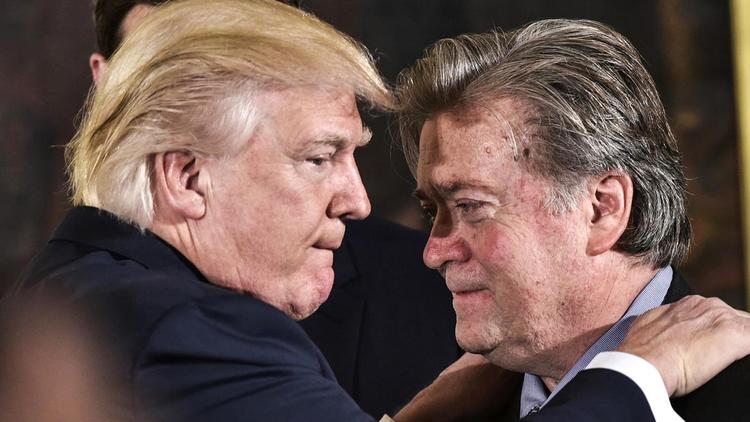 WARSAW – In the weeks since Donald Trump’s inauguration as President of the United States, it has become clear that he intends to roll back the progressive-egalitarian agenda that is commonly associated with “political correctness” to the starting block – not just in the United States, but globally. Stephen Bannon, Trump’s White House Svengali and former CEO of the extreme right Breitbart News, has long pursued this ideological project, and we now know that what he or Trump says must be taken both seriously and literally.

Trump’s transition was initially reassuring, because he nominated many undeniably serious (if also seriously well-heeled) people to his cabinet. But, after the inauguration, all hell broke loose as Trump and Bannon began to implement their project in earnest.
The Year Ahead 2017 Cover Image

First, Trump appointed Bannon to the National Security Council’s highest body, the principals committee. Then he nominated Ted Malloch, an obscure business studies professor at the University of Reading, in England, as US Ambassador to the European Union. Malloch recently expressed a desire to “short the euro,” and predicted that the currency will not survive another 18 months. Trump has also increased the likelihood of a trade war with Mexico, and he has been willing to confront major US corporations over his executive order banning travelers from seven Muslim-majority countries.

The ideological project that Trump and Bannon will seek to carry out could have far-reaching geopolitical and economic implications that should worry not only progressives, but also dyed-in-the-wool conservatives like me. To understand how far they are willing to go, one must understand their ultimate aims.

Most disturbingly, Trump and Bannon’s agenda seems likely to entail policies to weaken, destabilize, or even ultimately dismantle the EU. No motive other than ideology can explain Trump’s open hostility to the bloc, his bizarre ambassadorial appointment, or his notorious question to EU President Donald Tusk: “What country is next to leave?”

In conventional geostrategic terms, the EU is almost a costless extension of US political and military power. Owing to NATO’s significant military superiority, and the EU’s role as a barrier to Russian expansion, the US can avoid becoming entangled in a “hot war” with Russia. Meanwhile, the EU – together with Japan – is a dependable economic and military ally, whose friendship allows the US to speak for the “international community.”

There are no circumstances in which dismantling the Western international order is in America’s national interest – even when perceived through a nationalist lens. A truly “America first” administration would rightly expect its allies to pull their weight within NATO, and to defer to US foreign policies on non-European issues. But it would never gratuitously dismantle an essentially free multiplier of US power, as Trump’s foreign policy threatens to do.

If I am right about Trump and Bannon’s ideological agenda, we can expect them to find a way to support far-right National Front leader Marine Le Pen in the French presidential election this year, and to encourage a “hard Brexit” for the United Kingdom (only to leave it in the lurch afterwards). Trump will also likely lift the sanctions that the US imposed on Russia after its 2014 annexation of Crimea. After all, Russian President Vladimir Putin and Bannon are ideological twins.

Moreover, we should not put much stock in any security assurances that Secretary of Defense James Mattis may have offered to South Korea and Japan during his East Asia trip. Such promises are worth as little as Trump’s pledge to Polish President Andrzej Duda that “Poland can count on America.”

Domestically, Americans should be prepared to watch the administration dismiss officials who do not defend its agenda, and disregard court orders that inhibit its actions. In fact, we have already seen early signs of this when complaints emerged that immigration agents in New York were ignoring a federal judge’s emergency stay on Trump’s travel ban.

The prospects for business are just as sobering. Sooner or later, Trump’s destabilizing foreign policy will lead to global economic turbulence, uncertainty, and reduced investment – even barring full-scale trade wars. And domestically, his weakening of the rule of law will negate any potential economic benefits from tax cuts and deregulation.

Implementing this project is undoubtedly a dangerous strategy for Trump. By polarizing the American public to such an extent, he and the Republicans could suffer defeat in the 2018 midterm elections or in the 2020 presidential election; and he could even expose himself to the risk of impeachment.

There are two possible explanations for why Trump would take these risks. The first is that divisiveness has worked for him so far, by winning him the Republican nomination and the presidency. Politicians tend to stick with what works – until it fails.
Fake news or real views Learn More

The second explanation is that Bannon is calling the political shots, and is more interested in building a permanent populist “movement” than he is in getting Trump reelected. If Bannon wants to transform the American political landscape, an impeached or defeated Trump could become an ideal martyr for his movement.

That may not bode well for Trump himself; but, in this scenario, Trump’s fate will not weigh heavily on Bannon, who has set his sights on achieving goals that will leave America and the world very different from how he and his putative boss found them.

Jacek Rostowski was Poland’s Minister of Finance and Deputy Prime Minister from 2007 to 2013.