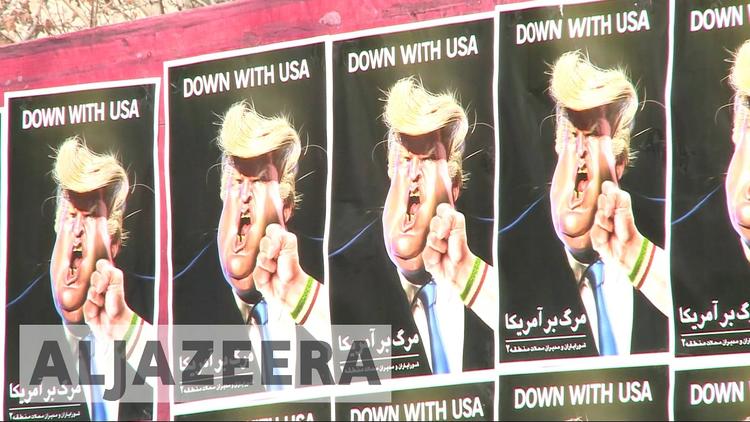 Hundreds of thousands of Iranians rallied on Friday to swear allegiance to their clerical leaders and reject U.S. President Donald Trump’s warning that he had put the Islamic Republic “on notice,” state TV reported.

On the anniversary of Iran’s 1979 Islamic Revolution that toppled the U.S.-backed Shah Mohammad Reza Pahlavi, marchers including hundreds of military personnel and policemen streamed towards Tehran’s Azadi Square for the main event.

They carried “Death to America” banners and effigies of Trump while a military police band played traditional Iranian revolutionary songs.

State TV showed footage of people stepping on Trump’s picture in a central Tehran street. Marchers carried the Iranian flag and banners saying: “Thanks Mr. Trump for showing the real face of America.”

“America and Trump cannot do a damn thing. We are ready to sacrifice our lives for our leader”, a young man told state TV, in a reference to Supreme Leader Ayatollah Ali Khamenei.

Last week, Trump put Iran “on notice” after a Jan. 29 Iranian missile test and imposed fresh sanctions on individuals and entities. Iran said it will not halt its missile program.

Leading religious and political figures, including President Hassan Rouhani, had urged Iranians to join the rally on Friday to “show their unbreakable ties with the Supreme Leader and the Islamic Republic”.

Tehran and Washington cut diplomatic ties shortly after the revolution, when students stormed the U.S. embassy in Tehran and took 52 Americans hostage for 444 days.

Among Iranian officials attending the ceremony was Qasem Soleimani, who heads Iran’s Quds Force and is in charge of foreign operations of the elite Revolutionary Guards Corps.

Iran said it had smashed an underground cell linked to Islamic State in recent days that it said wanted to “sabotage and carry out devilish acts” at the rallies.

Al Jazeera English: “Rouhani to Trump: Iran will not be intimidated”