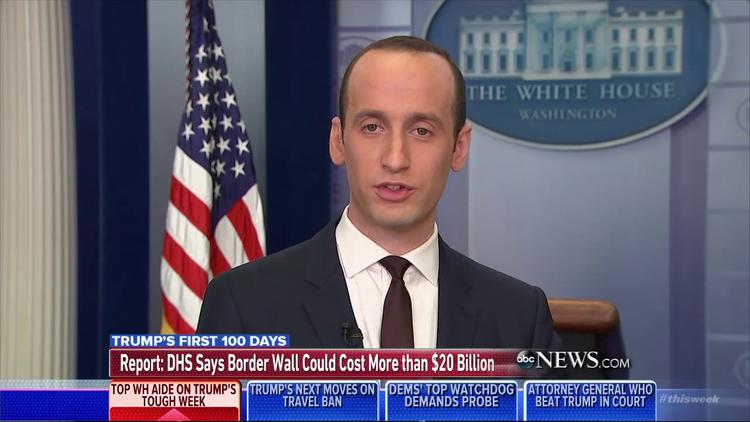 Stephen Miller, a snot-nosed kid with a bad attitude, advertised as White House senior policy adviser, delivered himself of some stern jeremiads on Sunday on Meet the Press, along with many Big Lies of which Josef Goebbels would be jealous.

It is dreary to see a Republican White House once again fall into the clutches of grandiose fantasists and drooling conspiracy theorists. We saw this with Karl Rove and Irv “Scooter” Libby in the Bush years. The arrogance, the big globe-straddling ambitions, the spit in the face of average people, and above all the Big Lie. What is it about today’s Republican Party that drives it into the arms of high-end hucksters and confidence men? Maybe it’s the cognitive dissonance of being a servant to the .01% but pretending to want to help average folks.

After denouncing the third branch of government, given powers of legislative review by the Constitution, Miller said:

“our opponents, the media and the whole world will soon see as we begin to take further actions, that the powers of the president to protect our country are very substantial and will not be questioned.”

We have seen these unimaginative scenarios so many times. The media as the enemy (you can’t outdo tricky Dick Nixon on that one). The whole world having to be impressed. Have you *met* any French people? Believe me, Stephen, they aren’t impressed. They can’t get past those ears, and wonder what happened to your hair. And we haven’t even gotten to your boss. And, then, sigh, the unquestioned power of the president. What’s the matter, “unitary executive” too hard for you to say?

Then there were Miller’s Giga-lies about undocumented people voting in the millions. Or maybe they are tera-lies. A lot of bytes go into a lie that huuuje.

But it is banal and ennui-inducing by now. We’ve been there, done that. We had to form a whole new internet group the last time, the “Reality-Based Community.” I guess it is time to dust back off that blogger.com comment section from 2004.

The key quote that kicked off the Community appeared in an article by Ron Suskind on October 17, 2004 in the New York Times entitled, “Faith, Certainty and the Presidency of George W. Bush.” It is said that the Bush administration official who delivered himself of this famous quote was stragegist Karl Rove, who connived at a Permanent Republican Majority and urged a war on Iraq as a way to make sure George W. Bush got to be a two-term president (the longer in office, the more money to be made). So this is what is attributed to him:

““We’re an empire now, and when we act, we create our own reality. And while you’re studying that reality — judiciously, as you will — we’ll act again, creating other new realities, which you can study too, and that’s how things will sort out. We’re history’s actors . . . and you, all of you, will be left to just study what we do.”

Rove did not mean to admit that he is detached from reality, any more than Kellyanne Conway intended to admit that she maintains a whole warehouse of alternative facts. Rove meant to say that George W. Bush had a big ol’ reality-creation machine on the back of his flatbed truck, and when you ran it, why it tinkered with dimensional space and made things turn out right for rich old cranky white men.

As for being an empire, no. The days of empire are over with. The “natives” or “wily oriental gentleman” as the Victorians called them all seem to have C4 plastic explosives now, if not, as with Pakistan and India and China, hundreds of nuclear warheads. Sticky wicket, old man, wot? Grand Ayatollah Ali Sistani of Najaf in Iraq, an elderly Iranian gentleman, pushed you and George around like the paper tigers you were, and he even did it nonviolently. Other impudent imperial subjects regularly blew up the poor 18-year-olds you sent over there to do God knows what. Since you were so big on turning Iraq into a shining beacon on the hill, I hear they need a good electoral consultant in Falluja these days, and maybe you’d be so kind as to volunteer?

In other words, that reality creation machine on W’s flatbed truck was on the blink. So it got Rove and Bush into an Iraq War that is still going on and will cost us $6 trillion and which even other Republicans won’t stand behind. It deregulated the hell out of Wall Street and so sent the big investment banks right to Gehenna, along with millions of mortgages, leaving average people so impoverished that a lot of them are still drinking themselves to death or hanging themselves in the closet over it. And then your attempt to punish Joe Wilson and Valerie Plame for questioning your phony cover story of Iraqi nuclear weapons (“WMD”) got your aide Scooter Libby in big doodoo. Very judicious doodoo. And your climate denialism will drown your great grandchildren, or give them heat stroke. See if you can please re-set that particular reality you created with 5-6 billion metric tons of carbon dioxide emissions a year from our one country.

So yes, Karl, I get to study what you wrought to the universe, and the resets and the twists and turns. I even wrote a whole book, Engaging the Muslim World, about what you got wrong in one part of the globe. There are lots of such books to be written. We writers will write them for a long time. But alas reality is a harsh mistress and doesn’t like to be fucked with. Guess what happens to people who try to create an alternate reality?

I don’t even understand the ambition. Reality is all we have to hold on to. We shouldn’t want to mess with it. But it is just as well, since even “empires” can’t. Especially when the whole idea of empire is past its expiration date and smells like a pile of two-week-old corpses.

And I see your whippersnapper of a protegé, Mr. Miller, out before the cameras just like you were 13 years ago, strutting like a meerkat that caught a cobra by the tail, and lying his bony ass off. Brings a tear to my eye. Not nostalgia. It’s just, I know how this movie ends.

ABC: “Stephen Miller on Immigration Order Next Steps: ‘All Options Are on The Table'”