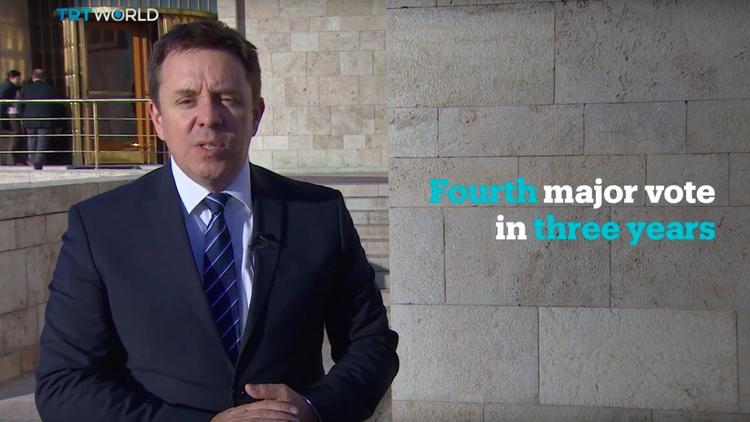 Turkey is facing a possible referendum in April regarding a constitutional amendment that would change the current system from a parliamentary to a presidential one. Despite heated debates in the public arena, in which the left has alleged that a presidential system will move Turkey into dictatorship, voters do not seem overly interested in the technicalities of the possible system change. The proposal requires some expertise in terms of legal and political language. Still, there is a considerable probability the referendum will succeed. Turkey has become a center-right country, with the left in a structural and long-term national minority.

Although the Turkish electorate was capable of fairly dramatic swings in the twentieth century, in this century there has been relatively little voter volatility. Some 90 per cent of the electorate has a strong attachment to a political party and for the past decade and a half there has been little swing between elections. Over two-thirds of the working class and rural inhabitants support the conservative parties. The remaining third of the electorate, comprising mainly urban middle class people, support leftist or social democratic currents, like the Republican Peoples’ Party (CHP). For much of the twentieth century, the determinedly secular and statist CHP, founded by Kemal Ataturk, the father of modern Turkey, had dominated the country’s politics. The entry into the political sphere of rural and provincial urban populations in recent decades, however, has reduced the CHP seats in parliament to only about one fourth.

In the 1920s through the 1940s, the political elites who had established the Republic considered themselves to be the owners of the country, who had the “burden of civilizing” the masses without asking their opinions on the upcoming changes in their lives. There was no social contract whatsoever between the ruled and the rulers until a multi-party system began being implemented in 1946. The memory of the one-party state has traumatized everyone, and conservatives have been able to play on a fear of marginalization and humiliation for their traditional values in provincial voters. Secular Kemalists, in contrast, whip up anxieties in the urban professional classes of going back to the darkness of Middle Ages.

The cooperation between the pro-Islam Justice and Development (AK) Party and the secular conservative National Movement Party (MHP) is a clear indication of this historical right wing bloc in Turkey. There are, however, also some floating voters who could be persuaded to change their votes by factors like economic slowdown, which would endanger their livelihoods, or issues like security and stability. The latter in turn are associated in the minds of relations with the United States, the European Union, and neighbouring countries. For some liberal elites, democratic reforms like human rights and more importantly, rule of law were crucial issues for their political choices.

The “no” camp will probably campaign against the referendum item on the grounds that a presidential system will polarize society and allow a sweeping intervention by the president in their secular style of life. Kemalists and their allies see themselves as guardians of the Republic in a proprietary way. They often seem to hold that their values are beyond criticism, since they had the lion’s share in modernizing the country. They inscribed this project of modernity in part on the female body . How women dressed was seen as a barometer of modernity and backwardness. So, until recently, traditionally clothed women were excluded from public spaces such as government buildings and even universities, an exclusion that affected the whole family. However, the militantly secular section of the society who had occupied the political center through the 1990s is anxious about losing their privileges over the rest of the society, whom they had been marginalized into the “periphery”. In short, this “polarization” issue has been disputed by the two sides from their own perspectives inasmuch as both of them accuse the other of plotting the marginalization of rivals. The secularists do have an advantage in typically having louder megaphones.

The center-left will also invoke the specter of authoritarianism, totalitarianism, and dictatorship. These charges have not appeared to hurt Justice and Development Party (AKP) leader Tayyip Erdogan in the past, inasmuch as he keeps winning elections, and may not deter the public with regard to a presidential system. The warning by the left that the AKP is a stealth vehicle for the imposition on secular Turkey of Muslim fundamentalism has never borne much fruit and likely the wider public has come to discount it.

The center-right, on the other hand, may be overly cocky. Their appeal to a feeling of past grievance on the part of marginalized traditionalists may not any longer have the appeal it once did. The younger generation is developing their own political ideologies, independent of their parents, as a result of modern individualization in the society. Ironically, the changes that have allowed women wearing a head-scarf to enter government facilities has made the issue less salient. The AKP argument that before it began regularly winning elections in the early 2000s, Turkey had been perennially beset by economic and political instability is overused, and invokes a distant past many Turks no longer remember or no longer remember very vividly. Similarly, the achievements of the AK Party over the past 15 years in different realms like the economy, health, transportation, and other investments are not necessarily persuasive as predictors of a future under a different system.

Still, despite its unpredictability in other spheres, when it comes to elections, the electorate in the past decade and a half seems to be fairly consistently divided into two camps, with the center-right in the majority. Unless one party makes a huge mistake, voters will not likely cross the aisle. The precise issues, or the details of the referendum, will be less important than the party loyalty and the country’s deep cultural division Unless the Kemalist opposition can overcome the conviction of the average voter that they are elitists with no robust ideas for taking the country into a brighter future, the center-right will likely continue to prevail.

Ali Murat Yel is Professor of Anthropology in the Department of Radio, Television and Cinema at Marmara University, Turkey.
—–