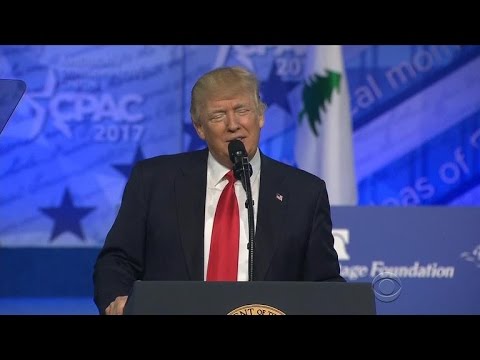 Donald Trump was unhappy Saturday that the major media had neglected to report a point made by Herman Cain in an interview on Fox. Cain alleged that in Barack Obama’s first month, the Federal budget deficit rose $200 bn., but in Trump’s first month it fell to only $12 bn. Obviously, Obama had nothing to do with the deficit in his first month– that was a result of the 2008 collapse, which had something to do with Republican policies of deregulating the banks and other mortgage lenders and declining to exercise any oversight over sketchy practices. And Trump had nothing to do with the deficit during his first month in office. That was a result of Obama’s 8 years of pulling the economy back out of the toilet to which the Republican Party had consigned it.

Trump’s petty attacks on journalists as enemies of America, as the worst people, and as irrationally denying him the credit for his 4 weeks of economic turnaround, are deeply worrisome to many Americans sensitive to the danger of a spiral down into authoritarian rule. William H. McRaven, the retired four-star admiral and former Navy Seal who led the raid against Usama Bin Laden, called Trump’s remark on the press as an enemy of the people “the greatest threat to democracy” he has ever seen.

Trump’s immature sidelining of reporters on his enemy’s list kept rolling on this weekend. White House spokesman Sean Spicer was set to do an on-camera press briefing on Friday, and then Donald Trump spoke at the conservative gathering CPAC. It is a custom that the spokesman doesn’t do an on-camera event the same day the president gives a substantial address. So Spicer switched to doing what is called a “gaggle,” a smaller briefing in his office attended only be a few reporters in a pool who then would convey his remarks to others.

Spicer pared down the invitee list to the bare bones. He excluded the BBC, CNN, the New York Times, the Guardian, the Los Angeles Times, Buzzfeed, the Daily Mail and Politico, among others. He allowed ABC, Fox News, Breitbart News, Reuters and the Washington Times. Breitbart is not a news outlet, but a propaganda arm of elements of the Ku Klux Klan who wear suits rather than white robes.

The exclusions were so egregious and petty that the Associated Press, USA Today and Time magazine declined to be present. The Washington Post and McClatchy did not know about the disinvitees, and said that if they had been aware of what was going on, they would not have attended, either.

Since Spicer often conveys fake news (the Atlanta Attack) or pro-Trump propaganda at his briefings, it isn’t clear that the excluded media were exactly missing anything.

Then Trump announced that he would be the first president since Tricky Dick Nixon voluntarily to skip the annual dinner of the White House correspondents, where in recent decades the president and the press engaged in some good-natured ribbing. Trump appears to have felt humiliated at one of these events by remarks of then President Barack Obama, pushing back against Trump’s outrageous lies about Obama’s birthplace.

But Spicer’s and Trump’s attempts to exclude so many journalists from a briefing may be all to the good.

Something is broken in American journalism. Maybe it is the “inverted pyramid” whereby US reporters put the “most important thing” first in the article. It has been pointed out that this way of organizing the article gives an unfair advantage to a duplicitous administration, since anything the president says goes first in the article. Bush and his people used this principle to game the press all the time. (When the scandal about US personnel torturing prisoners at Abu Ghraib in Iraq broke on a Thursday evening, Bush quickly came out and condemned the practice. The Friday headlines were “President condemns torture at Abu Ghraib.”)

Or maybe it is access journalism, whereby an administration adopts a few favored writers and feeds them scoops that it suits the administration to go on the front page.

Or maybe it is the news conference. Why privilege an administration’s narrative about itself by doing articles based on nothing more than hot air coming from the general direction of the West Wing?

But we need that back, big time, in this administration. Everywhere you dig in Trump’s cabinet, you find bodies. So instead of sitting in a room being fed falsehoods by Spicer or Trump, best for the journalists to be working contacts in the White House or at NSC or the Pentagon to get the real story. Enough people in Washington are appalled by the Trump-Bannon attempt to fascize America that they seem willing to leak damaging information all on their own. How much better if a trained journalist got those stories through initiative.

So here’s to Trump excluding virtually all the newspapers and cable channels. Let him. Go get the scoops he doesn’t want you to have.

Someone (probably not George Orwell) once said, ““News is something somebody doesn’t want printed; all else is advertising.” Whoever said it, truer words were never spoken.

We need less advertising (or “public relations” in some versions), and a helluva lot more journalism these days.