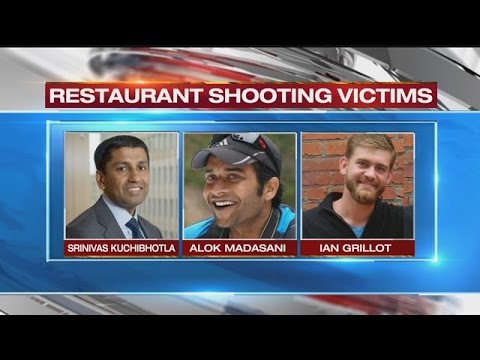 It is alleged that Adam W. Purinton, a regular at a bar and grill, went up to two Indian-American patrons on Wednesday night in Olathe, Kansas and screamed racial slurs at them. He was asked to leave by the bartender, but 15 minutes later came back, shouted “get out of my country!” and shot them. One victim, Srinivas Kuchibhotla, died of his injuries in a Kansas City hospital. He is said to have left behind a wife who is five months pregnant.

The other intended victim, 32-year-old Alok Madasani of Overland Park, is wounded and in hospital.

It is speculated that Purinton, who had served in the Navy and worked in internet technology, thought that the men were Middle Eastern Muslims rather than Indian Hindus.

Also shot and wounded in the hand, chest and neck is 24-year-old Ian Grillot, who just happened to be at the bar and grill, and who tried to stop Purinton as he fled. Grillot, from his hospital bed, told the story of how he was under a table and counted out nine shots then pursued the alleged assailant. But apparently he miscounted, and the gunman still had a shot to get off.

Grillot said: “It’s not about where he [victim] was from or his ethnicity. We’re all humans, so I just did what was right to do.”

Grillot’s injury is a badge of honor and courage, and he should be saluted by all right-thinking people. But it is a dark parable. White terrorism against people the white supremacists code as non-white or foreign will also victimize white people.

Purinton was picked up at another bar 80 miles away from the scene of the crime, where he allegedly confessed to having shot two “Middle Eastern” men. That kind of stupidity is an active danger to the survival of our species.

Remember, the shooter had been told by Trump-Bannon that Muslims hate America and should be excluded from the US.

Kuchibhotla was a star software engineer originally from Hyderabad, India (his wife is also from there). He had degrees from Jawaharlal Nehru Technological University in Hyderabad and from the University of Texas. His co-workers say he was the nicest person. His bereaved wife and his family are trying to raise money to send his body back to India for his funeral.

He and Madasani worked at Garmin International.

The White House sets a tone in a country. Trump’s assertion that “Islam hates us” and his project of a Muslim ban sent a signal permitting hate crimes to the millions of unbalanced people in the US into whose hands the National Rifle Association has insisted on putting firearms.

But ironically, Trump would approve of Kuchibhotla.

As Willa Frej tells the story, then Steve Bannon had a radio show on Sirius XM in 2015, he had Donald Trump on as a guest and complained about all the foreigners in the US. Trump pushed back, saying that a lot of bright people come to America and get Ivy League degrees, and we should try to keep them.

Bannon told Trump, “When two-thirds or three-quarters of the CEOs in Silicon Valley are from South Asia or from Asia, I think… A country is more than an economy. We’re a civic society.”

Needless to say, Bannon’s “facts” are fake. Asian-Americans actually account for 14 percent of CEOs in Silicon Valley. And, as we social scientists use the phrase “civil society” (non-governmental public organizations), there is no reason to exclude Asian-Americans. That is, there is no analytical reason, assuming you’re not, like, a racist bigot.

Bannon speaks of a “civilizational war” with Muslims and through the executive orders he crafter for Tump he has laid the ground work for blood in the streets.

Bannon is not fit to shine the shoes of any of the three victims here, who actually contribute positively to our country rather than trying to Nazify it.

Two of my uncles fought the Nazis. I mind anyone trying to import racist thuggery into this country. There’s no difference between publishing a rag like Breitbart and going out to Arlington cemetery and spitting on the graves every day.