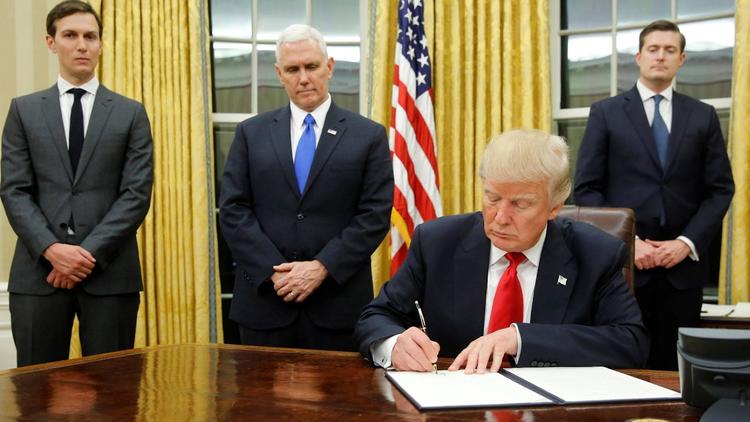 You have to hand to the civil society groups pushing back on the Trump administration’s recent executive orders banning the entry of Syrian refugees and all other types of visa holders from Syria, Iran and five other majority Muslim countries in the Middle East and North Africa. Through protests and well coordinated, volunteer lawfare, a temporary stay on deportation was issued within the first 24 hours, green-card holders were exempted almost as quickly, and, as of February 4, 2017, a Federal judge in Seattle issued a restraining order blocking the implementation of the executive order nation wide. This show of civil force is impressive. It will also be for naught if those opposing the assault on our civil liberties and national character are not ready for the next terrorist attack.

As public intellectuals, we must encourage our elected officials to come clean about the limits of fighting terrorism, and equip them with the talking points, datasets and cold hard facts they will need to pull back the curtain on whatever brand of national security snake oil the White House will be peddling. Otherwise, it will be too late. Since 9/11, the competition between our national values has been tilted in favor of security. There are piles of reports and articles spelling out the steady erosion of values like privacy, due process, and respect for national sovereignty. This administration is prepared to trigger a landslide capable of sweeping away the protections that are left. If democratic leaders and public intellectuals aren’t willing to come clean on the limits of national security before the next attack, it might be too late.

If you are reading this, you probably know that the tenor the communiqués and social media posts on these measures by the so-called Islamic State group (ISIL) has been wholly predictable: the US has declared war on Islam, we told you they would, it’s time to act. There is every reason to believe they will – and soon. These groups aren’t just evil; we know they are cold, calculating opportunists with the demonstrated capacity to strike anywhere, at anytime, and with readily available means. We know they have done their homework, assessed our weaknesses and recognized it only takes a pressure cooker, a moving van or a Wal-Mart procured assault rifle to wreak havoc on our nation.

But that’s not the danger, that’s just a given. The danger is how the national security charlatans in the White House will react when the next attack happens. Consider President Trump’s chief strategist, Steve Bannon for a minute. We know he is a very smart guy, who is loath to take any step he hasn’t calibrated against the assumed reaction and in preparation of the next ten steps he intends to make. The hullabaloo around him suddenly replacing the joint chiefs on the National Security Council confirms this. Do we really think he hadn’t expected the backlash this first set of executive orders would generate? You don’t think he knew there would be questions about the absence Egypt and Saudi Arabia, countries whose nationals comprised the bulk of the 9/11 hijackers, from the no-entry list? You don’t think he was anticipating the outpouring of liberal angst and moral indignation over the treatment of foreigners would have such prominence on the national airwaves?

You see, not only is it probable Mr. Bannon knows the next attack is coming, it is highly likely he already knows how President Trump will respond. Perhaps a speech that goes something like this: “How sad! The dishonest media gave all that time to those politically correct protestors, liberal judges and congressional appeasers. They said my executive orders went too far! Well I said they didn’t go far enough! And who was right?”

Cue the applause. And the next round of executive orders.

In this highly polarized political climate, the next attack will clear the way for a set of executive orders even more extreme than the last. The moderate republicans and swing state democrats have been reading the polls showing how the 50/50 split on the current set of executive orders breaks down in their districts. They know their base supports these bans and don’t want to be labeled as weak or tarred as traitors. Another attack and they will scramble to shore up their national security credentials by chugging down any type of snake oil the White House sends their way.

With the next attack, all the momentum opposing these measures will fold like a house of cards. Other than a few diehards and easily discountable liberals from deep-blue states, there will be no one willing to stick their neck out over refugees, or businessmen and college students from Egypt, Saudi Arabia, Jordan, Pakistan, or other allies in the Middle East. Depending on the scale of the attack, or frequency, we might not see much of a fuss if the White House proposes measures to expedite stripping the citizenship from naturalized or first generation Americans who might, just might present a security risk. Don’t forget candidate Trump suggested as much after the Orlando shooting, or that such decisions are within the purview of the National Security Council on which Mr. Bannon now sits.

Given the almost certainty of another attack, the only way to avert this all too plausible scenario from coming to fruition is for someone, anyone with national security heft and a podium to come right out and say the national security emperor has no clothes. Someone has to say what terrorism scholars, security analysts, intelligence officials, covert operatives all know to be a basic fact: there is no way to defeat ISIL or eradicate terrorism. The draconian measures being dreamed up by this administration are no more likely to “win the war on terror” than drone strikes, surveillance schemes, or killing Osama Bin Laden. Absolute security is a chimera. It has never existed and it never will. We know this and we have to be courageous enough to say it.

Such truths are horrible politics. But that doesn’t make them any less true. Someone needs to fall on their sword and admit terrorism is just like the flu: there are common sense measures in place that will limit our exposure but even if we completely upend our way of life will cannot eliminate the risk. Failure to accept this will exact an immeasurable price on our national ideals. And we still won’t be safe. And there will still be terrorism. The only real choice Americans have about terrorism is how to live with it. If no one says this, Steve Bannon will decide.

Allison Beth Hodgkins is an Assistant Professor of Security Studies and Conflict Management at the American University in Cairo and a graduate of the Fletcher School, Tufts University.

Democracy Now!: “Former Watergate Prosecutor: We Need Officials Who Will Stand Up to Trump”