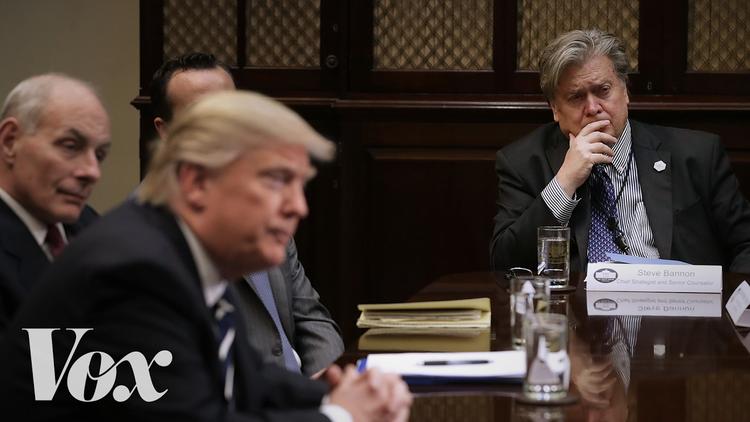 Trump the businessman is at war with Trump the ideologue over the question of Islam.

Donald Trump rode to power on a wave of fear. During his presidential campaign, he portrayed terrorists, immigrants, the Chinese government and many other people and entities as threats to America. But nothing proved more powerful as a mobilizing force than his anti-Islamic pronouncements.

Other presidential candidates were careful to distinguish between what they considered to be radical extremists and ordinary Muslims. Trump made no such attempt. “I think Islam hates us,” he declared. It was not a very great leap to his conclusion: Ban all Muslims from the country. Trump was going beyond mere political incorrectness to challenge the very U.S. Constitution, which prohibits discrimination based on religion.

As president, Trump has followed through on his promise. With his executive order banning people from seven majority-Muslim countries entrance to the United States, the president has attempted to legalize his Islamophobia. The order does not mention Islam, and the order doesn’t include the largest Muslim country in the world: Indonesia. Nor does the order mention Christianity. But it promises to “prioritize refugee claims made by individuals on the basis of religious-based persecution, provided that the religion of the individual is a minority religion in the individual’s country of nationality.” In other interviews, Trump has made it clear that he means to specifically prioritize Christians.

True, the executive order doesn’t apply to all Muslims around the world. But Trump and his allies, like Rudy Giuliani, know that his policies must have at least the appearance of legality to make them less susceptible to judicial challenge. More importantly, Trump wants to foster a hostile climate of opinion in the United States so Muslims will think twice about visiting, immigrating or staying. The courts have, so far, blocked Trump’s efforts. But he will likely issue another executive order that tries to achieve the same results but within the parameters of the law.

The new president’s Islamophobia is purely political. As a businessman, Trump has had no problems making deals with predominantly Muslim countries. He owns a pair of towers in Istanbul. He’s moving forward on two luxury resorts in Indonesia. He licensed his name to a golf course in Dubai. In the past, has had Muslim clients in the United States as well, such as Qatar Airways.

If Trump were merely a transactional president, he would be making deals everywhere in the world. But Trump as president is not looking at the world through a businessman’s eyes. He has surrounded himself with advisers who have a very different approach. Strategic adviser Steve Bannon, for instance, wants to turn the United States into a Whiter, more Christian and more conservative country, and many Trump supporters concur. As a result, the Trump administration is pushing policies that Trump the businessman would have opposed because they adversely affect U.S. corporations and the U.S. economy.

This disregard for the bottom line can be seen most prominently in the administration’s approach to Iran. From a business standpoint, the nuclear deal with Iran is a win-win. The United States stops a potential nuclear threat, and U.S. businesses eventually gain access to a lucrative overseas market. During the presidential campaign, Trump disregarded the obvious economic advantages of the agreement in favor of using it as a cudgel to beat those associated with negotiating it.

Even after the election was over, Trump didn’t back away from his criticisms of the deal and of Iran in general. Ostensibly in response to an Iranian missile test, Trump applied new sanctions against the country. “The international community has been too tolerant of Iran’s bad behavior,” Michael Flynn said when he was still national security adviser, signaling the new direction of U.S. policy. “The days of turning a blind eye to Iran’s hostile and belligerent actions toward the United States and the world community are over.” At risk is the nuclear deal as well as the nearly $17 billion worth of commercial jetliners that Boeing has sold to Iran.

Moreover, the Obama administration spent eight years trying to balance the two major powers in the Middle East — predominantly Shia Iran and predominantly Sunni Saudi Arabia — in an effort to keep Iraq together, minimize fallout from the Arab Spring, and later find some solution to the conflict in Syria. Trump and the Republican Congress have no interest in maintaining such a balance.

Trump has widened the scope of his actions beyond Iran. In addition to threatening to designate Iran’s Islamic Revolutionary Guards Corps as a foreign terrorist organization, the administration wants to include the Muslim Brotherhood. Here again, anti-Islamic orthodoxy has trumped pragmatism. The Brotherhood has attracted the ire of real terrorist organizations for abandoning armed struggle in favor of participating in democratic politics. Senior State Department and Pentagon officials are reportedly urging Trump to reconsider these designations.

During his presidential campaign, Trump promised to focus more on problems at home. He seemed less interested in trying to use either soft power or hard power to change the complex realities of the Middle East. With the single exception of destroying the Islamic State, Trump preferred to address problems at the water’s edge with immigration bans, physical walls and a beefed-up military to protect the homeland. A streak of isolationism ran through his “America First” rhetoric. Trump was also proudly ignorant of the most basic facts about the region, saying that he’d learn the difference between Hamas and Hezbollah if and when necessary.

As president, Trump has largely abandoned this hands-off approach. He has announced that he would be delighted to arrange a peace deal between Israel and Palestine. At the same time, he has sided almost exclusively with Israel on every important issue of disagreement — supporting a move of the U.S. Embassy to Jerusalem, condemning a UN vote on Israel’s settlement policy that the Obama administration backed, and nominating an ambassador to Israel (David Friedman) who believes that the country should simply annex parts of the West Bank.

Outside the Middle East, the Trump administration has betrayed a similarly anti-Islamic approach. It has aligned itself with far-right wing and Islamophobic political parties in Europe, such as the National Front in France. The travel ban has potentially jeopardized relations with majority-Muslim countries such as Indonesia and Malaysia and elicited adenunciation from the African Union as well.

But the most troubling aspect of the Trump administration’s approach to the Muslim world is its tendency to view matters through a “civilizational” lens. Bannon understands Western civilization as fundamentally anti-Islamic (and anti-secular), its identity forged at the Battle of Tours in 732 and through later conflicts with the Ottoman Empire. Bannon and his extremist allies in Europe are threatened not just by separatist movements like the Islamic State, but also by religious pluralism, which blurs the lines of their particular identity politics. The documentary project that Bannon was working on before joining the Trump campaign focused on a hypothetical Islamic takeover of the United States, a companion piece to the “Londonistan” and “Eurabia” arguments made by European Islamophobes. The resignation of Michael Flynn might diminish the overt Islamophobia of the administration but it will not affect the underlying civilizational framework within which Bannon and others operate.

Many Americans supported Trump because he promised to be a transactional president who “gets things done.” In the end, because of the people he has brought into his inner circle, Trump will end up attempting to transform the relationship between the Islamic and non-Islamic worlds. It’s not likely, however, that Trump will go down in history as either the dealmaker he promised to be as president or the transformational leader his aides are pushing him to become.

John Feffer is the director of Foreign Policy In Focus and the author of the new novel Splinterlands.