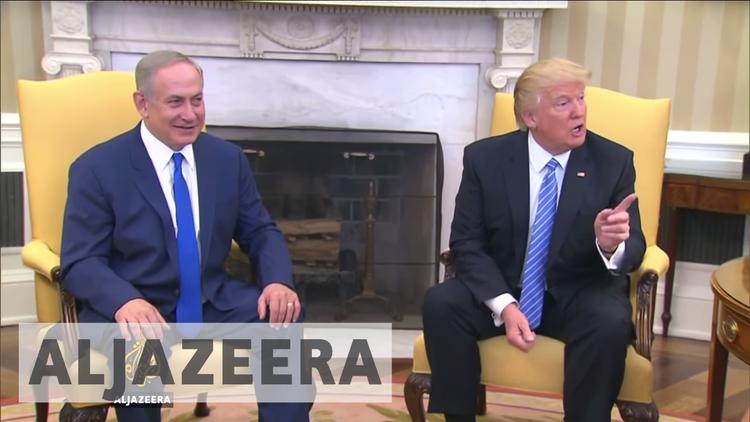 By the standards of his turbulent time in office, President Donald Trump’s meeting with Israeli Prime Minister Benjamin Netanyahu was relatively nondescript. In many ways, Trump’s statements to the assembled press were characteristic of the colloquial, rambling, but above all vague, policy announcements made to date. His press conference with Netanyahu generated more questions than answers and the outlook for Israeli-Palestinian peace remains grim.

As has been widely acknowledged, Trump appeared to reverse 15 years of explicit (and decades of implicit) US support for a Palestinian state and a two-state solution. However, it was much more ambiguous than a direct disavowal. When it comes to solutions: “I like the one that both parties like … I can live with either one”. Trump failed to even express a preference.

He has also taken an ambiguous position on Israeli settlements. He blasted the Obama administration for abstaining on a UN Security Council resolution criticising settlement construction, thereby allowing it to pass. He reiterated this on Wednesday by rejecting “unfair and one-sided” action against Israel at the UN. His nominated ambassador to Israel, David Friedman, is a known funder and ideological supporter of the settlement movement. Emboldened by their expectations of this duo, the Israeli government in January and February announced new wave of construction in Ariel, Ma’aleh Adumim, and elsewhere in the West Bank.

In response, the White House said it had not taken an official position on settlement activity, but urged all parties to refrain from unilateral actions. Trump also told Netanyahu: “I’d like to see you hold back on settlements for a little bit – we’ll work something out.” While this can hardly be considered a rebuke and is devoid of specifics, it adds a level of uncertainty.

As with so many other areas of policy, Trump vacillates from one pole to another. In December 2015, he appeared to take a more even-handed approach to the conflict when speaking to the Republican Jewish Coalition (RJC). His unusual refusal to call for an undivided Jerusalem elicited boos from the crowd. He has since made moving the US embassy from Tel Aviv to Jerusalem a priority, and then prevaricated.

At that same RJC meeting, he said, “I’d like to go in with a clean slate, and just say, ‘let’s go, everybody’s even, we love everybody and let’s see if we can do something’”. In an interview a few months later, he asked a reporter to “let me sort of be a neutral guy” by not making pronouncements for one side or the other.

The problem is of course that in the Israeli-Palestinian conflict, everybody is not even. The Palestinians live under Israeli occupation. This asymmetry means that not pushing back against settlement expansion or being coy about support for a Palestinian state is tantamount to a green light for Israel to continue its creeping annexation of the occupied West Bank.

No room for indecision

The one hint of what “really a great peace deal” would look like referred in thinly veiled terms to the wider Arab world: “It would take in many, many countries and would cover a very large territory”. Such a deal (referred to as an outside-in strategy) would aim to capitalise on the shared antipathy between Israel and Sunni Arabs towards Iran, and convince them to bring the Palestinians into line in order to more easily confront their common enemy.

While the principle of including the Arab world in negotiations is both old and correct, the notion that they will readily abandon the idea of a Palestinian state is overly optimistic. Moreover, the idea that most Palestinians would settle for anything less is practically delusional. Although Arab leaders are as frustrated as ever with the divided and failing Palestinian leadership, the issue is important on the street. After the turmoil of the Arab Spring, the regimes in Egypt, the Gulf, and elsewhere are not keen on provoking their citizens over the subject.

On the one hand, Trump’s flexibility and bluster can be seen as the positive pragmatism of a deal-maker. On the other hand, it also suggests an astounding naivety and a lack of understanding of the details of the conflict. Policy seems to fluctuate depending on who Trump last spoke to. Reversal on the US embassy, for example, appeared to come after meeting King Abdullah of Jordan, who emphasised the possible negative implications.

While Trump seems to take a great deal of pleasure from being unpredictable, this does not augur well for peace in a chaotic region. Netanyahu is notoriously risk-averse, and often points to instability as a reason not to make any drastic peace overtures. The Arab states, for their part, have other issues such as Islamic State, Syria, Iraq and Yemen on their minds. As they wade into these treacherous diplomatic waters, Trump and his son-in-law turned negotiator Jared Kushner will soon discover why this conflict has bedevilled seasoned diplomats and experts for decades.