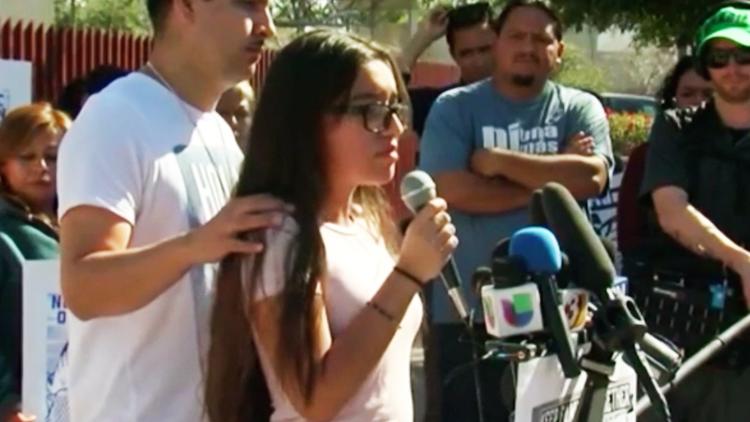 I’ve seen firsthand how the White House’s cruel ban is impacting moms and kids here in the United States.

Federal judges have suspended the order, which blocks immigration from seven Muslim-majority countries and suspends refugee settlement from everywhere, while federal cases wind their way through the courts.

I’m a legal director for the American Friends Service Committee, which means I regularly work with Muslim families on their immigration cases. My heart is breaking from the stories I’ve heard from children worried that their families will be split up, and from parents in the U.S. who are trying to bring their children here.

To be clear, this ban applies to kids, too.

After a five-year old was detained at Washington’s Dulles airport, White House Press Secretary Sean Spicer had the audacity to defend the practice of targeting children. “To assume that just because of someone’s age or gender or whatever that they don’t pose a threat would be misguided and wrong,” he claimed.
immmigration-muslim-ban-protest

In other words, the White House now assumes every man, woman, and child from the seven banned countries — even a five-year old — is a threat.

Rumors and misinformation were percolating across immigrant communities before the ban was even signed.

One day, I heard some kids wondering which members of their family would be deported. Their extended family is from an African country, and all are citizens or legal permanent residents. Unless one of them commits a deportable offense or the ban is expanded exponentially, they’re all going to remain in the United States.

When I told them this, they started jumping up and down out of happiness and relief. But those kids were in fourth and first grade. No kids that young should ever have to have this kind of conversation.

But I also work with people whose lives may be irrevocably changed by the ban.

I have clients from Somalia and Iraq in particular who are trying to get their children to the U.S., and I’m worried about them. Even before the ban, they expressed concern about how long it would take to get their kids here with them. And now they could wait even longer, with no guarantee that their day will ever come.

The process was already a long one, because all migrants and refugees are subjected to rigorous vetting — despite what we’re being told about the current vetting being insufficient.

These families’ cases have been in process for two years or longer. They’re trying to bring their children as “follow-to-join” refugees, which is a process that Trump’s order suspended for at least four months. And that four-month stoppage could in reality create years of delays.

Because the children are Iraqi and Somali — both countries on the “ban” list — I’m deeply concerned about what will happen.

When I talked to the Somali mom, I felt physically ill telling her that I don’t know how long it will take for her children to come to the U.S. I can’t really describe the sheer desperation and sense of defeat I saw in her.

I’m scared that she’ll throw everything away here and return to her family in a refugee camp abroad. I’ve had distressingly similar conversations with other parents, too.

The biggest ray of hope comes from the hundreds of thousands of people across the country who’ve taken to the streets, written letters, and called their representatives to assert loudly and clearly that refugees should be welcomed.

I hope that those in power — and everyone who has a role in carrying out these decisions — will hear their plea for humanity. The ban must be ended.

The Young Turks: “How Trump’s Deportations Are Breaking Up Real Families”