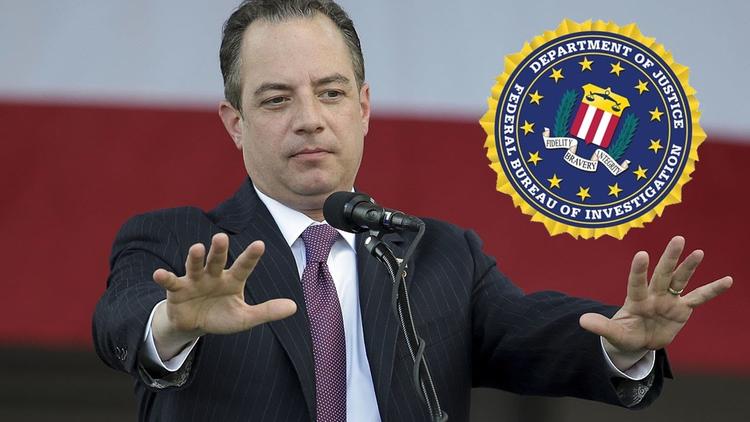 White House Chief of Staff Reince Priebus contacted the FBI and asked them to deny reports that the Trump campaign was in contact with Russian intelligence agents before the November election, CNN reported Thursday, citing multiple U.S. officials who asked to remain anonymous.

Such a request would mark a stark breach of protocol put in place to ensure that FBI investigations remain free of political interference.

As Rep. John Conyers (D-Mich.), a member of the House Judiciary Committee, told the Guardian: “The White House is simply not permitted to pressure the FBI to make public statements about a pending investigation of the president and his advisers.”

A 2009 memo from the then attorney general Eric Holder says the Justice Department should advise the White House on pending criminal or civil investigations “only when it is important for the performance of the president’s duties and appropriate from a law enforcement perspective.” …

The New York Times‘ story on communications between Trump campaign aides and Russian officials was published on February 14. Soon thereafter, “White House officials had sought the help of the bureau and other agencies investigating the Russia matter to say that the reports were wrong and that there had been no contacts, the officials said,” CNN reported.

The brazen attempt to interfere with an active investigation reminded some of President Richard Nixon’s Watergate scandal, during which Nixon tried to use the CIA to quash the FBI investigation of the Watergate burglary.

The outrageous breach of protocol has fueled calls for Priebus’ resignation.

“This is plainly a White House that has no compunction about asking the federal law enforcement apparatus to run its errands, and to operate as barroom bouncers on call whenever the jefe feels inconvenienced,” wrote Esquire‘s Charles P. Pierce. “At least Nixon hired his own investigators when he got pissed at newspaper leaks. These clowns tried to turn the FBI into the Plumbers. It’s going to get really crowded in D.C. parking garages pretty soon.”

“Where will transgressions end?” tweeted Citizens for Responsibility and Ethics in Washington (CREW) co-founder Norm Eisen:

This is shocking. If in Obama WH, Reince would now B w Flynn on unemployment line. Such contacts forbidden. Where will transgressions end? https://t.co/RUxHTeh8XG

Meanwhile, the only public response President Donald Trump has had to the story thus far is to take to Twitter and attack the FBI: “The FBI is totally unable to stop the national security ‘leakers’ that have permeated our government for a long time,” Trump tweeted.

The FBI is totally unable to stop the national security “leakers” that have permeated our government for a long time. They can’t even……

find the leakers within the FBI itself. Classified information is being given to media that could have a devastating effect on U.S. FIND NOW

In fact, it seems that instead of an independent investigation into the reports of ties between Trump aides and Russian officials, the American public may only see an investigation into “low-life leakers” conducted by a billionaire Trump ally, as Common Dreams reported.

The Young Turks: “Trump Administration Told FBI To Back Off Russia?”