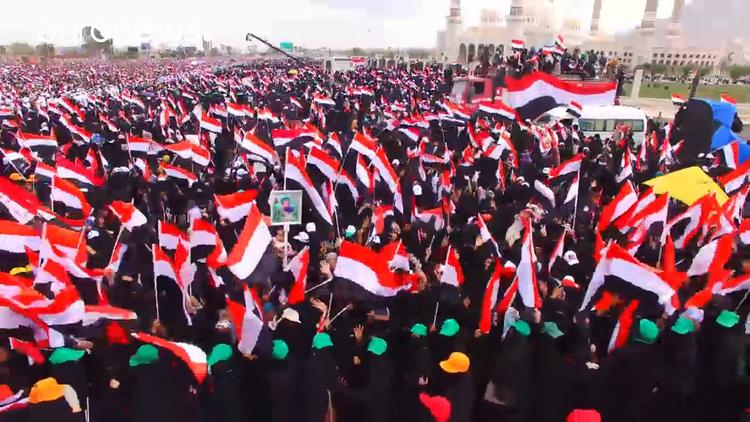 According to Yemen’s Legal Center of Rights and Development, the conflict has thus far killed over 12,040 Yemenis and left more than 20,000 others wounded.

The leader of Yemen’s Houthi movement, Sayyed Abdul-Malik Badreddin Houthi, said in a speech marking the two-year anniversary of the U.S.-backed, Saudi-led bombing campaign in the country that the aggression they have faced so far has been a failure.

He stressed that while Saudi Arabia has been relentlessly attacking the country, the kingdom has not reached any of its goals. The root of the aggression, he said, is Saudi Arabia serving Israeli interests, as well as U.S. hegemony in the region.

“Yemeni people reject U.S. hegemony as they show hostility to the Zionist entity and voice support to the Palestinian cause,” Sayyed Houthi said in the televised speech Saturday.

The Ansarullah movement leader also said that the kingdom’s almost-daily airstrikes against civilians in Yemen are nothing short of war crimes, seeing as Saudi Arabia is using the most lethal armaments.

Hundreds of thousands of people poured into the streets of the capital Sanaa Sunday during events to mark the two-year anniversary of the war and to protest the brutality of the bombing campaign.

The conflict began in March 2015 in efforts to reinstall toppled President Abd Rabbuh Mansour Hadi and to suppress the Shia armed militias that oppose the Saudi-backed former leader.

Yemen’s Legal Center of Rights and Development announced the same day, Saturday, that the conflict has thus far killed over 12,040 Yemenis and left more than 20,000 others wounded.

The center added that the onslaught has also destroyed 757 schools and institutes, 111 university facilities, 271 factories and 1,520 bridges and roads.

The Saudi-led coalition justifies its attacks on Yemen by claiming Houthi rebels are “supporting terrorism,” allegedly sponsored by Iran.

Houthi rebels, however, claim the Saudis are attacking because of the Shiite movement’s growing political influence in the region. Saudi Arabia, a country governed by radical Wahhabi Sunnis, has been at odds with Shiites and Iran for decades.

“There is a disaster in Yemen and Saudi Arabia will not stop destroying our country,” Ahmed Al Moaiad, a London-based Yemeni activist recently told teleSUR.

“That’s why the Yemeni people have to resist this invasion.”