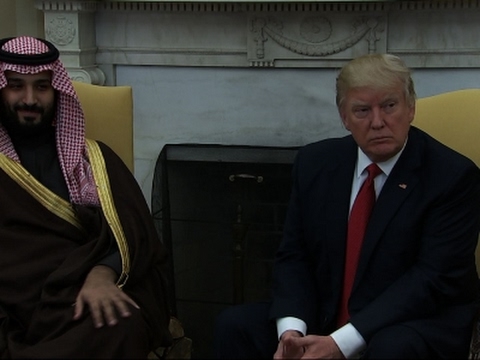 Trump is meeting this week with Muhammad bin Salman, the deputy heir apparent of the Saudi Arabian throne and the minister of defense. He had lunch with him at the White House on Tuesday, and will have more extended talks on Thursday, according to white House spokesman Sean Spicer.

Here are some of the main disputes between Trump and Saudi Arabia.

Syria is the most important dispute, and the one Trump is least likely to give way on. Trump has repeatedly expressed support for strongman Bashar al-Assad and for the Russian intervention in Syria, at one point suggesting that if Russian president Vladimir Putin wishes to deal with radicalism in Syria, we should let him.

Trump’s positions on Syria are diametrically opposite from what the Saudi elite want. They have a proxy group among the rebels, the Army of Islam, made up of Salafis or fundamentalists with an extreme anti-Shiite ideology. This group is now leading the rebel side in Russian-sponsored negotiations with the regime. It is militarily mainly important near Damascus, in Douma and Ghouta and is now under siege by the resurgent regime.

Former Secretary of State John Kerry admitted that the US views the Army of Islam as a terrorist group only one step removed from al-Qaeda.

So Muhammad b. Salman is likely to press Trump to back off his strong support for Bashar al-Assad and for Putin’s Syria policy and to give the green light for an attempt at Saudi reassertion via heavier arms and more money to stop Army of Islam positions from crumbling around Damascus.

Trump is erratic, but his one piece of consistency has been a stress on good relations with Russia, so my guess is that Prince Muhammad will come away empty-handed on Syria.

Muhammad b. Salman is credited with pushing for the Saudi-led coalition’s air war on Yemen in an attempt to unseat the Helpers of God party-militia, popularly known as the Houthis.

Yemen was ruled by a Zaydi Shiite theocratic leader, or Imam, in the mid-twentieth century, but he was unseated by a revolution led by Arab nationalist officers in the 1960s. During the civil war, the Saudi royal family supported the Imam (even though he was a Shiite) and the Egyptian leader Gamal Abdel Nasser supported the young Arab nationalists. In 1978 one of the nationalist officers, Ali Abdullah Saleh, came to power, and ruled as a president for life until early 2012.

Although Saleh began as an Arab nationalist revolutionary, Saleh became conservative over time and attracted Saudi support. He was overthrown by the 2011-2012 youth revolution, but remained powerful in the ruling party and among factions in the military. He was succeeded via national referendum by his vice president, Abdrabbuh Mansour Hadi. Yemen in 2012-14 was pursuing national reconciliation, multi-party talks, and a new constitution and new elections.

Then in September of 2014 the rural Zaydi revolutionaries, the Houthis, marched into the capital of Sanaa and took over, in stealth cooperation with Saleh and his loyalists. By early 2015 they had forced out President Mansour Hadi and then rampaged down to Sunni areas in the south, taking the port of Aden. The Houthis resent hard line Saudi Wahhabi dominance in the Gulf and challenged Riyad’s hegemony. They accepted some minor support from Iran, which was mostly symbolic, but that made the Saudis very threatened. The Houthi/ Saleh coalition and its recklessness and naked ambition derailed all the gains of the 2011-2012 revolution and opened the country to foreign intervention and war. Zaydis are only 1/3 of the Yemeni population and could not hope to rule the whole country.

By spring 2015 Muhammad B. Salman had decided to intervene to put Mansour Hadi back in power and to push the Houthis back to their rural northern homeland. His coalition did manage to kick the Houthis out of the port of Aden, but you could not say the war has gone well. Guerrilla groups seldom fall to air assaults.

The US is supporting the Saudi war effort, having swallowed the sketchy line that Houthis are sort of like Yemeni Hizbullah and are Iran’s cat’s paws. Trump’s friend Mike Flynn even painted a Houthi engagement with a Saudi ship offshore as an Iranian attack on the US Navy. The US military is helping refuel the Saudi fighter jets and even helping choose targets for bombing. The Saudis have sometimes disregarded US advice to avoid, e.g., bridges that serve civilian populations, and this recklessness has frustrated the State Department and the Pentagon. The Saudi bombings have hit hospitals, schools, weddings and created a huge refugee crisis, and have caused millions to go to bed hungry.

My guess is that Prince Muhammad will be given a blank check by Trump to do whatever he likes to Yemen.

Trump complained during the presidential campaign that Saudi Arabia was not doing anything special to combat Daesh (ISIS, ISIL). Although Saudi fighter jets have flown a few missions against Daesh positions, Trump is correct that defeating Daesh has been a very, very low priority for Riyadh. In part, the Saudi royal family may hope that Daesh keeps Iran busy in Iraq, acting as a barrier to Iran’s establishment of a secure sphere of influence in the Arab world stretching from Iraq through Syria to Lebanon.

Arguably, they’d have done the world a favor if they had bombed Daesh intensively and left Yemen alone.

Trump suggested that he would boycott Saudi petroleum if Riyadh did not step up and provide more military resources to fight Daesh.

As it happens, Daesh is on its last legs as a territorial state, now holding only a bit of West Mosul and some towns of about 100,000 in northern Iraq like Hawija and Tel Afar. By the end of 2017, it could have lost its state-like character entirely, though it will still be powerful in some villages and neighborhoods, and able to blow stuff up from time to time.

It is not clear if Trump will want now to strong arm Saudi Arabia into joining the last part of the anti-Daesh campaign. There is no reason to think that the Saudis have much interest in doing so.

The Saudis don’t want Trump to move the US embassy to Jerusalem, since East Jerusalem is occupied territory and the Saudis support the PLO, which wants it for Palestine’s capital. The Dome of the Rock is also the third holiest shrine in the Muslim world.

It is not clear whether Saudi Arabia has made its peace with the Iran nuclear deal negotiated with the UN Security Council plus Germany. Certainly, Riyadh is distressed that international economic pressure on Iran has been dramatically lessened and that Iran is free to continue to seek spheres of influence in the neighborhood. Iran has beaten Saudi Arabia in Iraq, Syria and Lebanon and in Western Afghanistan. That has to smart. Prince Muhammad will impress upon Trump the desirability of continuing the US unilateral sanctions against Iran, and the need to contain it.

It does not now appear that Trump will in fact tear up the nuclear deal. He can be depended to take a hard line with Iran, and to continue the Treasury Department sanctions on Tehran. But he is with Russia in Syria, which means he is willy nilly with Iran in Syria.

So it is hard to see what the prince can get from Trump with regard to Iran except some tough talk.

Trump is dedicated to keeping petroleum profitable as long as possible. This stance pleases Saudi Arabia. But Prince Muhammad is likely more clear-eyed about the future than is Trump. The age of the electric car is bearing down on us. Oil is probably doomed within 15-20 years. Prince Muhammad knows this, and is trying to begin the process of diversifying the Saudi economy and transitioning to the post-fossil fuel age. But the slower the world goes, the better for the Saudi royal family (and the worse for the earth). The prince may push for more climate denialism and for anti-solar and anti-wind legislation, i.e. all the things Trump, Scott Pruitt, Rex Tillerson and the whole rogue’s gallery already support. For now, they can have their love fest with the Saudi royal family.