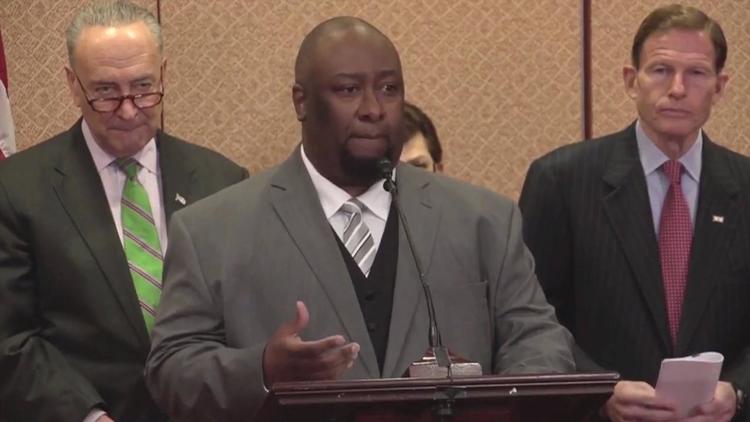 ALPHONSE MADDIN: In January of 2009, I was working as a commercial truck driver for TransAm Trucking Incorporated of Olathe, Kansas. I was hauling a load of meat through the state of Illinois. After stopping to resolve a discrepancy in the location to refuel, the brakes on the trailer froze. I contacted my employer, and they arranged for a repair unit to come to my location. I expected that help would arrive within an hour.

I awoke three hours later to discover that I could not feel my feet, my skin was burning and cracking, my speech was slurred, and I was having trouble breathing. The temperature that night was roughly 27 degrees Fahrenheit below zero. The heater in the cabin was not producing heat, and the temperature gauge in the truck was reading minus-7 degrees below zero. After informing my employer of my physical condition, they responded by telling me to simply hang in there.

As I sat there physically suffering in the cold, I started having thoughts that I was going to die. My physical condition was fading rapidly. I decided to try to detach the trailer from the truck and drive to safety. When I stepped out of the truck, I was concerned that I may fall, because I was on the verge of passing out. I feared that if I fell, I would not have the strength to stand up, and would die. I walked to the back of the trailer to place a lock on the cargo doors. The distance that I walked to the back of the trailer seemed like an eternity, as my feet absolutely had no feeling at all.

I eventually was able to detach the tractor from the trailer. Before I left, I called my employer to notify them that I had decided to head for shelter. And they ordered me to either drag the trailer or stay put. In my opinion, clearly, their cargo was more important than my life. My employer fired me for disobeying their orders. And I’d like to make it clear that although I detached the tractor from the trailer, I returned, and I completed my job. And I was still fired.

OK, I disputed my termination from TransAm Trucking and ultimately won. This was a seven-year battle. Seven different judges heard my case. One of those judges found against me. That judge was Neil Gorsuch.

AMY GOODMAN: That was Alphonse Maddin, the trucker, the driver, in the case involving Supreme Court nominee Neil Gorsuch. At Tuesday’s hearing, Senator Al Franken questioned Gorsuch about his dissent in the case.

JUDGE NEIL GORSUCH: Oh, Senator, I don’t know what I would have done if I were in his shoes, and I don’t blame him at all, for a moment, for doing what he did do.

JUDGE NEIL GORSUCH: I empathize with him entirely.

JUDGE NEIL GORSUCH: Oh, Senator, I thought a lot about this case, because I—

SEN. AL FRANKEN: And what would you have done?

JUDGE NEIL GORSUCH: Senator, I don’t know. I wasn’t in the man’s shoes. But I understand why he did—

SEN. AL FRANKEN: You don’t know what you would have done.

SEN. AL FRANKEN: I think everybody here would have done exactly what he did. … It is absurd to say this company is in its rights to fire him because he made the choice of possibly dying from freezing to death or causing other people to die possibly by driving an unsafe vehicle. That’s absurd. Now, I had a career in identifying absurdity, and I know it when I see it. And it makes me—you know, it makes me question your judgment.”

Democracy Now! “A Driver Fled His Truck to Avoid Freezing to Death. One Judge Ruled Against Him: Neil Gorsuch”