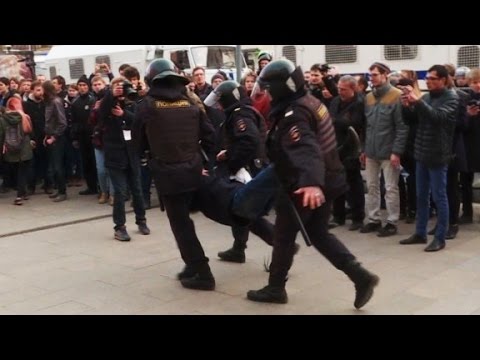 The meme du jour about the protests in Russia on Sunday is that Donald Trump did not criticize Russian President Vladimir Putin for arresting the protesters, including their leader, Alexei Navalny.

Apparently the pressure on the State Department from Russia hawks in Congress was so great that State issued a brief statement condemning the arrest of protesters.

But Trump was uncharacteristically quiet.

It is a fair point, and signals Trump’s double standards.

But the irony is that Navalny is even more like Trump than Putin is, and in fact is a little scary.

Navalny is a nationalist, who has been seen at far-right, ultra-nationalist events. His platform not only attacks corruption but also calls for deportation of undocumented workers.

Navalny accused Russian prime minister Dimitry Medvedev of embezzling so much money he has become a billionaire. He has a Non-Governmental organization intended to track corruption in Russia’s elite.

Medvedev may well be extremely corrupt. But this campaign against him looks like Trump’s demands that Hillary Clinton be locked up without trial.

Navalny was behind the demonstrations throughout Russia, in 80 cities, on Sunday, and was detained after they broke out.

BBC Monitoring translated his and his supporters’ tweets to the effect that all the employees of Navalny’s Anti-Corruption Foundation were arrested on Sunday:

“Moscow police have detained all employees present at the headquarters of opposition leader Alexei Navalny’s Anti-Corruption Foundation (FBK), according to Navalny himself.

“All employees of the Anti-Corruption Foundation have been detained. This is the best possible appraisal of their work. The FBK will not allow thieves a quiet life,” Navalny wrote on Twitter on 26 March (bit.ly/2n6O4N7).

FBK staff had been broadcasting live footage of anti-corruption protests taking place in Moscow and other cities around Russia. According to Navalny ally Leonid Volkov, who had been presenting the live feed, during his detention he was asked by police whether the broadcast had been sanctioned by the authorities (bit.ly/2ojF3AP).

Earlier, Navalny himself was detained at the beginning of the protest on Moscow’s central Tverskaya street. He later tweeted, urging his supporters to continue marching without him.”

But Navalny’s agenda goes beyond corruption. The Atlantic writes,

“In an interview in January, Navalny laid out the main points of the so-called nationalist agenda, including combating illegal immigration and ethnically based organized-crime groups; protecting ethnic Russians abroad; and bringing order to the North Caucasus, which he has called a de facto lawless “off-shore zone.” ”

He has also demanded that all Federal funding for the Caucasus be suspended.

So the Caucasus is to Navalny as Mexico is to Trump.

In Moscow authorities appear to have asked Navalny and his protesters to move somewhere quieter, rather as George W. Bush (unconstitutionally) proposed “protest zones” for those unhappy with his Iraq War.

This is not the liberal opposition in Russia, but something dark and even to Putin’s right. While Navalny’s followers should have the right to demonstrate freely, there is no particular point in demanding that Trump swing around and blindly support Navalny just because he isn’t Putin.