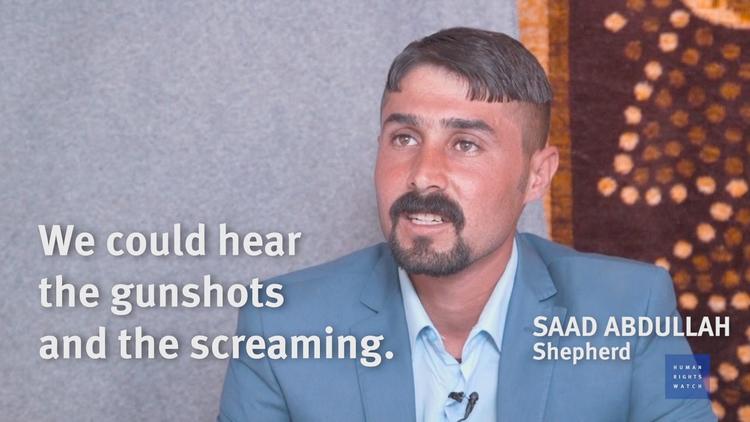 (Erbil) – The Islamic State (also known as ISIS) executed and dumped the bodies of possibly hundreds of detainees at a site near Mosul, Human Rights Watch said today.

Multiple witnesses told Human Rights Watch that the bodies of those killed, including bodies of members of Iraqi security forces, were thrown into a naturally occurring sinkhole at a site known as Khafsa, about eight kilometers south of western Mosul. Local residents said that before pulling out of the area in mid-February, ISIS laid improvised landmines at the site, which are sometimes referred to as improvised explosive devices or booby traps.

“This mass grave is a grotesque symbol of ISIS’s cruel and depraved conduct – a crime of a monumental scale,” said Lama Fakih, deputy Middle East director at Human Rights Watch. “Laying landmines in the mass grave is clearly an attempt by ISIS to maximize harm to Iraqis.”

Iraqi authorities should make it a priority to mark and fence the site for the protection of the mass grave and those in the area, until deminers can clear the site, Human Rights Watch said. Residents said that water runs through the bottom of the sinkhole, which may make it difficult to exhume the human remains there. If exhumation is possible, the process should be carried out under international standards. Authorities should turn the site into a memorial and support families of victims seeking justice for the executions.

The site is one of dozens of ISIS mass graves found between Iraq and Syria, but could be the largest discovered thus far, Human Rights Watch said. While it is not possible to determine the number of people executed at the site, the estimates of residents, based on executions they witnessed and what ISIS fighters in the area had told them, reaches into the thousands.

Iraqi forces seized control of the site in mid-February 2017. Human Rights Watch visited the site on March 7, but did not inspect the sinkhole closely due to the landmines. An improvised explosive device left at the sinkhole killed a journalist and at least three Iraqi security forces on February 25.

Residents said they had seen multiple mass executions at the 35-meter-wide sinkhole, sometimes on a weekly basis starting in June 2014 until May or June 2015. They said they heard ISIS fighters talking about other executions, including of former police, former Iraqi Security Force members, and members of the Awakening Force (Sahwa), the Sunni force that fought extremist fighters from 2007 to 2008.

Some of the victims may also have been detainees at Badoush Prison, 10 kilometers west of Mosul, which ISIS captured on June 10, 2014. On that day, ISIS fighters executed about 600 prisoners at a ravine in the nearby desert, nine survivors told Human Rights Watch.

On March 11, 2017, the Iraqi Security Forces announced that they had found another mass grave, about two kilometers from Badoush prison, that held between 500 and 600 men – though it is unclear how they determined these numbers. On March 13, Human Rights Watch spoke to an Iraqi military commander who had visited the site four days earlier and had witnessed Iraqi forces exhuming bodies there. On March 15, a general in the Iraqi military’s 9th division told Human Rights Watch that under the division’s supervision, medical experts from Baghdad had exhumed about 400 bodies from the site.

Fawaz Abdulameer of the International Committee for Missing Persons, an international organization working to establish effective procedures for protecting mass graves and conducting exhumations, told Human Rights Watch: “These excavations are unacceptable. They must be carried out by trained teams with sufficient experience, because they are dealing with human remains at a crime scene.”

This is the second report of ad hoc and unprofessional exhumations taking place without authorization.

Widespread or systematic murder carried out by a state or organized group as part of an attack against a civilian population – as part of a policy to commit murder – constitutes a crime against humanity. The deliberate killing of civilians and civilian or military prisoners during an armed conflict constitutes a war crime.

All parties to the conflict in Iraq should respect the 1997 Ottawa (Mine Ban) Treaty, which Iraq has ratified.

“The strong desire to exhume the remains of loved ones from ISIS mass graves is perfectly understandable, but hastily conducted exhumations seriously harm the chances of identifying the victims and preserving evidence,” Fakih said. “While exhuming the remains of those killed at Khafsa may be difficult, authorities should do what they can to make sure that those who lost their loved ones there have access to justice.”

Five residents from villages near Khafsa told Human Rights Watch that on June 10, 2014, they saw ISIS fighters bring four large trucks filled with blindfolded men, with their hands bound, to the sinkhole. Two residents of al-Athba, a village three kilometers from Khafsa, two residents of Swada, a neighboring village, and a resident of Irbid, three kilometers away, who were able to see the site, described what they saw.

The witnesses said the fighters unloaded the men, lined most of them up on the edge of the sinkhole, and opened fire so that the bodies fell in. Fighters shot a smaller number of people a short distance away and threw their bodies into the hole, the witnesses said. One of the men from al-Athba and the man from Irbid said ISIS fighters later told them that the men they had executed were prisoners from Badoush.

The killings at the Khafsa sinkhole apparently continued regularly from late 2014 to mid-2015. One of the residents from Swada, a shepherd, said that in September 2014, he was near Khafsa and saw male ISIS fighters arrive in a pickup truck with at least 13 women, all with full face coverings and cloaks and blindfolds, with their hands bound. He said the ISIS fighters shot the women on the precipice of the pit. He said he witnessed three more group executions subsequently, including the execution of three of his relatives.

One of al-Athba residents, also a shepherd, said he witnessed one execution at the end of 2014, after ISIS fighters called on the residents of al-Athba to come to the sinkhole over the mosque loudspeaker. Fighters brought three of his friends and his cousin to the site because they were accused of having shared GPS coordinates of ISIS positions with the Iraqi forces, he said. The fighters beheaded the men on a wooden block in front of the town residents, and then threw the bodies into the pit. He said fighters told him they had killed another of his cousins, an army officer, and dumped him in the pit.

The shepherd from al-Athba said that at another time, at the end of 2014, he was with his sheep in the area and saw ISIS fighters arrive in two cars and drag out a very large, strong man. They walked him up onto the precipice of the sinkhole, and as they were about to shoot him, he grabbed one of the fighters and jumped into the hole, holding him. Two witnesses of multiple executions said that fighters started carrying out executions further from the precipice after that because of the fighter they had lost.

Another shepherd from al-Athba said that in February 2015 he was about 30 meters from Khafsa with his sheep when he saw six ISIS fighters arrive in a large bus and march at least 20 men to flat ground near the sinkhole. They lined the men up and shot them, then threw their bodies in, he said. In March 2015, the man said, he was again in the area with his sheep and saw two fighters pull up in a car, take four prisoners out, and shoot them near the pit, then throw their bodies into the sinkhole.

Human Rights Watch interviewed a family from Kudila, 60 kilometers southeast of Khafsa, who had fled their home in March 2016. The husband, a former Iraqi soldier, said that ISIS had imprisoned him for 18 days in Qayyarah in March 2015 for selling cigarettes. He said that fighters took several prisoners from the facility while he was there, and he overheard guards saying they were taking them to Khafsa for execution. The prisoners did not return.

Another man from Sawda said that in early 2015, he saw fighters driving 11 freezer trucks toward the sinkhole, and heard from local ISIS fighters that as many as 1,000 people transported to the site in those trucks had been executed that day.

The five people living near Khafsa said they had heard estimates of between 3,000 and 25,000 people executed at the site. They said they often heard screams and gunfire. By early 2015, the stench from the bodies had become unbearable and families were telling ISIS fighters that they would need to move to Mosul if it persisted. One of al-Athba residents said: “It was summer so we had to sleep on the roof, but we were not able to sleep because the stench of the dead was so strong. The smell was overwhelming.” Another said, “The smell was disgusting, we were inside our houses but the smell still reached us.”

In response to the complaints, fighters brought several cranes and dumped the contents of several large trailers into the hole then filled the rest of the pit with earth using several excavators, according to two of the residents Human Rights Watch interviewed. One said, “They [ISIS] told us the trailers were also full of bodies.” ISIS did not carry out any more executions at the site after it was filled in, all the locals said. They said the smell of decomposing bodies diminished after that.

Satellite imagery analyzed by Human Rights Watch shows that the sinkhole was filled in sometime between March and June 2015.

By the time Iraqi government forces retook the area around the sinkhole in February 2017, the filled-in earth had started to subside. Images taken then by international journalists show the remains of what look like two cars in the middle of the filled-in pit.

The location was already labeled on the open-source online map, Wikimapia, as an ISIS mass grave in April 2014 by an unnamed user, before the area had fallen to ISIS-control, but when there was already a strong ISIS presence in the area. The two shepherds from al-Athba and a federal police officer said that as early as 2004, Al-Qaeda in Iraq, the precursor group to ISIS, had used the sinkhole to dump bodies of people they executed for allegedly collaborating with the Americans or the Iraqi and Kurdistan Regional Governments.