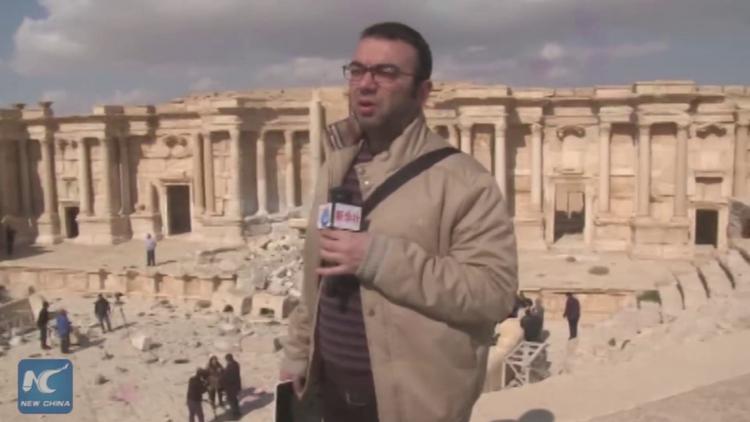 The city and its ruins, designated a UNESCO world heritage site in 1980, have traded hands several times during Syria’s six-year civil war.

“A little destruction won’t stop us from coming here to play and sing on this stage, despite what happened to it,” Angel Dayoub told AFP. “I want to play music and sing everywhere that has seen the expulsion of IS, which hates singing and banned playing instruments.”

“We’re singing ‘We’re coming back’ because we will come back even stronger than before to rebuild Syria,” she says. “Everyone will rebuild in their own way. We want to rebuild it with music and singing.”

Islamic State group, aided by the U.S. and Turkey according to the Syrian government, first seized Palmyra in May 2015 and began to systematically destroy and loot monuments and temples during a brutal ten-month reign. It used the ancient theater as a venue for execution-style killings before being driven out in March 2016. They then recaptured Palmyra in December, blowing up the tetrapylon monument and part of the theater.

Young musicians flocked to the theater during a press tour organized by the Syrian army this weekend, playing to an audience of dozens of Syrian and Russian soldiers. Explosions could still be heard in the distance, as Syrian forces press their offensive against Islamic State group north and east of Palmyra.

“Daesh wanted to ban us from the theater, to ban us from singing, but I want to challenge it, to beat it,” says Maysaa al-Nuqari, an oud player. Dressed in a black leather jacket and combat boots, her curly hair dyed a deep red, Nuqari gestures at several nearby musicians to join the jam session. “Daesh is darkness, but music is light,” she said.

Although the precise date of its founding is unknown, Palmyra’s name is referred to on a tablet dating from the 19th century BC as a stopping point for caravans between the Mediterranean and the east.

It developed into a wealthy metropolis thanks to trade in spices, perfumes, silk and ivory from the east and became known to Syrians as the “Pearl of the Desert.”

Palmyra’s temples, colonnaded alleys and elaborately decorated tombs — some of the best preserved classical monuments in the Middle East — attracted more than 150,000 tourists a year before Syria’s conflict broke out.

Now, the difficult task of assessing what remains of those celebrated monuments has been left to Wael al-Hafyan, who heads the engineering unit in Homs province’s antiquities department.

After a preliminary assessment, Hafyan says additional destruction is limited to the theater’s front including an arched recess behind the stage, as well as the explosion of the tetrapylon.

Islamic State group reduced it to a pile of rocks in a massive explosion in January, lambasted by the U.N. as “a new war crime and an immense loss for the Syrian people and for humanity.”

“It’s impossible for anyone with even an iota of humanity not to feel sad when they see this. I’m sad, and I will stay sad until Palmyra goes back to the way it was,” Hafyan told AFP.

“All of Palmyra is left. Palmyra’s history has remained,” he answers. “A few scratches cannot distort its beauty. The enormity of what Daesh did here, all of its crimes, doesn’t even amount to a scratch on this beautiful, glorious face that is Palmyra.”