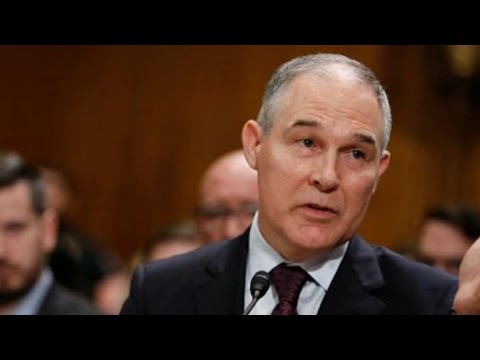 Having Scott Pruitt as head of the Environmental Protection Agency is sort of like the plot of that Showtime thriller Dexter, where the police forensic technician trying to catch criminals is in his spare time a vigilante serial killer. Pruitt is Koch and ALEC.

Pruitt actually expressed public doubt this week about whether human-generated carbon dioxide emissions cause climate change. Since even a student in eighth grade chemistry can actually do an experiment demonstrating that CO2 is a greenhouse gas, we can only assume that Pruitt is a student of Goebbels and is practicing the Big Lie. The comparison to Goebbels is apt, since denying that human-caused CO2 and methane emissions cause global warming will cause further future genocides, mowing down human beings not because they are Jewish but because they live near a coast or in the pathway of a megastorm. Yes, friends. The proper term for denialists is Climate Fascists.

There is no point in arguing the facts with Pruitt and anyone who supports him. The facts were clear a long time ago. So how to respond?

The response must be practical. So imagine you had a robot designed to vacuum the rugs in your house. And then imagine that a virus infected its software and it started dumping dust and dirt on your rug here and there instead of vacuuming it up. The robot is the EPA and Pruitt is the virus. Obviously you have to try repair the virus at some point. But in the meantime all you can do is go get a broom and sweep up the dirt.

The broom is social action.

There are about 600 coal plants in the United States. Many are scheduled for early retirement, but others might go on belching pollution for another 20 years. Since coal is the dirtiest source of electricity, we have to close the coal plants if we are to ameliorate the worst effects of climate change.

If Pruitt angers you, swing into action. Find out if there is a coal plant near you and devote some energy to organizing to close it. Here are some things we can do:

1. Pressure your state representatives to outlaw coal plants in your state. Oregon’s legislature has mandated that all coal use in the state cease by 2040. The parliament of Finland is considering legislation to ban coal use by 2030, only 13 years from now. Coal is already more expensive than other electricity generating technologies except nuclear, and consumers will save money if coal plants are closed in favor of solar and wind.

2. Pressure your utility to close its coal plants on an accelerated schedule. Buy stock and attend the stockholders’ meeting. Be loud. Call them and complain as a consumer. Where you meet resistance, use social media to shame the perpetrator. In Indiana, stakeholders in NIPSCO succeeded in getting the company to “close Chesterton’s Bailly Generating Station by mid-2018 and a good portion of Wheatfield’s Schahfer Generating Station in 2023.” So the obvious next step is to see if the Schahfer Generating Station can’t be closed completely before 2023. On the other hand, the shameless I&M/ American Electric Power utility at Fort Wayne Indiana wants to extend the life of its Rockport coal-fired plant, to the dismay of locals. Shame I&M.

Remember, there are only 600 such plants in the country. Each closure brings us closer to our goal of limiting the worst effects of climate change.

3. Let’s make entire states coal-free. Connecticut, e.g., only has one coal-fired plant left. It should be closed as soon as possible. Unfortunately it is being replaced by a natural gas plant. Natural gas is half as dirty as coal, so that is better than nothing. But natural gas will be our next target.

4. Sue the bastards. Environmentalists are suing a Colorado Springs coal plant, on the grounds that it is violating existing environmental law by spewing noxious chemicals into the air we breathe. A similar lawsuit has been launched in Jefferson County Alabama. Recent research shows that breathing polluted air is associated with heightened risk of Alzheimers. Coal plants are inherently vulnerable to suits that require them actually to obey clean air laws and regulations.

5. Peaceful, permitted demonstrations and rallies against coal plants have been found to be effective around the world, including in Kenya. It is only right that we emulate Kenya, given that Trump insists our last president was born there. Even villagers in Myanmar/ Burma know that having a coal plant as their neighbor would be dangerous for them, and they are valiantly protesting. Why are Americans so timid, browbeaten and cowardly that they let coal plants spew mercury and sulfuric acid into their children’s lungs? Or that they let them heat up the earth to dangerous levels for our children’s children? Greening the earth is inherently a peaceful endeavor, and peaceful action gains hearts and minds. Peaceful movements are twice as likely to succeed.

So don’t argue with Pruitt or his Koch Brother-funded cousins. Close down the coal plants. End coal.

There are 600 coal plants. We should try to close them all in 8 years. That is how to reply to Trump and Pruitt and the other genocidal climate fascists.