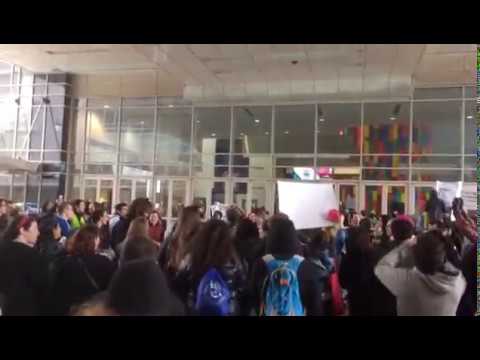 Protesters gathered under the banner, “Jews won’t be free until Palestinians are, reject AIPAC, reject occupation.”

Jewish protesters marched Sunday outside the American Israel Public Affairs Committee conference in Washington as they slammed the lobbying firm for its support for policies of the right-wing Israeli government.

Protesters held a banner saying, “Jews won’t be free until Palestinians are, reject AIPAC, reject occupation.” IfNotNow, a group of young, left-wing U.S. Jews organized the action, which was billed as a “Reclaim, Resist, and Reimagine” rally. Almost 700 people said they would attend on the event’s Facebook page, Haaretz reported.

The outlet also said that it was the first time that a protest against the organization had drawn such big numbers and so many Jewish people.

The protesters carried signs against the Israeli occupation of Palestinian lands as well as the increasing abuses against Palestinians.

The Israeli lobbying arm blames Palestinians entirely for the absence of peace talks and refrains from criticizing any Israeli policies, including its illegal settlement building in the occupied West Bank.

The right-wing Israeli government, as well as AIPAC, welcomed the election of Donald Trump as U.S. president as they see him as a “true ally” to Israel who will not criticize settlement building and will not push for a two-state solution with the Palestinians allowing far-right factions to push for the annexation of the West Bank.

Trump has also said he would move the U.S. embassy from Tel Aviv to the contested city of Jerusalem. Speaking at the AIPAC conference, U.S. Vice President Mike Pence on Sunday revived talk of the possibility the U.S. may move its embassy, saying Trump was seriously considering the matter.

“After decades of simply talking about it, the president of the United States is giving serious consideration to moving the American embassy from Tel Aviv to Jerusalem.”