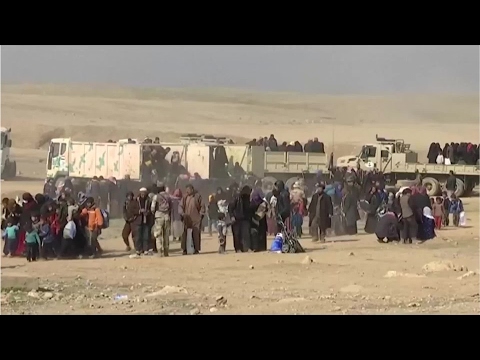 As US commanders begin confessing that it is likely that the US military bears responsibility for last Thursday’s errant airstrike that killed as many as 200-300 innocent civilians, America’s Iraqi partner Prime Minister Haydar al-Abadi disagreed, lashing out at critics.

Al-Abadi, from the fundamentalist Shiite Da’wa (Islamic Call Party), alleged that the motive of those raising a hue and cry about the targeting of civilians is to save elements of Daesh (ISIS, ISIL), at the last minute, and to halt international support to Iraq in its war on terrorism. He also said initial Iraqi government investigations have yielded results that challenge the current narrative.

He told a select group of journalists earlier this week, “We are fighting on several fronts–military and economic and anti-corruption. We are steadfast and will overcome. We will not turn back, however fierce the smear campaigns become. No one can monopolize that victory for his own benefit.”

He added, “No one is more zealous than we are in protecting civilians, and from the beginning of this liberation struggle we affirmed that we would liberate human beings before territory.”

He said that Iraq has launched a preliminary investigation and that he had sent two committes to look into the circumstance of the explosion in Mosul that killed numbers of citizens. He also warned against attempts to detract from the sacrifices of the troops doing the liberating, by bringing back the people who had surrendered the (Sunni) cities to Daesh.

He also asked where those now so concerned with civilian life wee when Daesh ruled all of Mosul for two years and brutalized its population. Did Daesh, he asked, allow people to live in freedom and security?

He also praised the Shiite militias as national heroes who heeded the call to defend the nation from Daesh issued by top Shiite cleric Ayatollah Ali Sistani in summer of 2014. He said there was no truth to the rumor that he planned to ask them to dissolve (after the Mosul campaign is over).

Last Friday, member of parliament for Ninewah Province (of which Mosul is the capital), Farah al-Siraj, had asked al-Abadi to open an inquiry into the strike that allegedly killed 263 civilians. Minister of Defense Irfan al-Hayali immediately complied, beginning last weekend. Member of parliament Salim al-Juburi, demanded an emergency meeting of a parliamentary committee to discuss the massacre at Mosul.

This is Juan speaking now. First of all, likely what happened was that there were snipers atop some buildings in the al-Jadidah neighborhood of West Mosul, who were killing advancing Iraqi troops. The local commander asked his American colleagues to call in an air strike on the snipers’ position. The US complied, but was surprised to discover that a neighboring building also collapsed, with hundreds of civilians in it. Al-Abadi is suggesting that Daesh had stored explosives in that building full of civilians and that the US air strike on a neighboring edifice unexpectedly set them off. If this finding is that of the initial Iraqi military investigation, it explains why al-Abadi is so angry, since he thinks that the real culprit here is Daesh, and it is being let off the hook. (It is of course also possible that the US hit the wrong building or that the Iraqi army mistakenly thought the snipers were atop an empty building.)

I don’t think the Iraqi government had any choice but to try to dislodge Daesh from Mosul. It is a terrorist organization that has killed thousands, and continues to plot to blow up Baghdad, Istanbul, Brussels, Paris, etc. Plus it was mistreating and massacring Iraqi citizens. I cannot understand why the government launched this military ground campaign agaist the very thickly populated West Mosul without first calling for civilians to leave. (It is true that Daesh did not typically allow people to leave, but some could have escaped and why not encourage that?)

While I understand al-Abadi’s frustration, I have to say his speech was a huge disappointment. He doesn’t seem to understand how unsympathetic to the loss of civilian life he appears. Worse, he is a religious Shiite and most of the victims were Sunni Arabs, and any sign that he is unconcerned with civilian Sunni casualties would raise the hackles of the Sunnis he is trying to rescue.

After Mosul, Iraqi politicians have to start bringing people together. It doesn’t help bring people together to be defensive and accuse human rights activists of being tools of Daesh. It doesn’t help, to keep Shiite militias around indefinitely. These elite attitudes toward ordinary Iraqis are probably more dangerous to the future of the country than a few mere terrorist attacks.