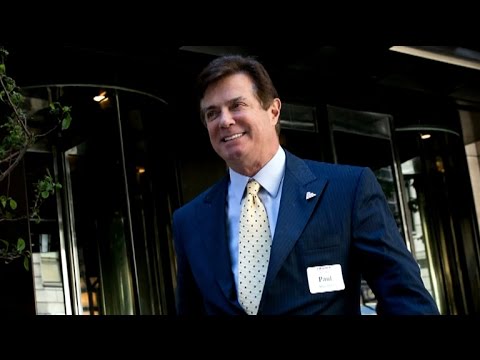 An avalanche of news about the connection of key Trump political operatives to Vladimir Putin and the Russian Federation rolled down ominously on the West Wing on Wednesday.

The evidence for collusion between Trump figures and the Russian Federation to gain the White House for Trump is still mostly circumstantial, but some of it is beginning to cross over into being direct.

Paul Manafort was chairman of the Trump presidential campaign from March until late August of 2016, including during the Republican National Convention. He served much longer than did Steve Bannon, the Breitbart fake news purveyor, who succeeded him.

During the Republican National Convention, Manafort orchestrated the removal from the Republican Party platform of a pledge to provide lethal weapons to Ukraine with which to oppose Russian incursions into the east of that country. Obviously, removal of that plank was something Russia wanted very badly, and Manafort obliged them. Why?

Manafort is a third-generation Italian-American and an attorney and Republican Party fixture who worked on the Ford, Bush Sr., and Dole campaigns. For Reagan he had served as Associate Director of the Presidential Personnel Office at the White House.

In Washington, knowing rich and powerful people personally is worth gold and offers the hail fellow well met the opportunity for enormous riches as a lobbyist.

By 2006, the intrepid reporters Jeff Horwitz and Chad Day Associated Press reported, Manafort was hired for $10 million as a lobbyist by Russian billionaire Oleg Deripaska to lobby for him and for Vladimir Putin and the Russian Federation. The arrangement would “greatly benefit the Putin Government.”

As the post-Soviet political system evolved in Russia a group of billionaires or oligarchs rose from the ashes of socialism. As Putin gradually established his power from 2000, he was visibly uncomfortable with the pluralism of political power that battling billionaires could wield, and with the independent media some of them were running. He gradually brought them to heel and attached them to himself. Those who refused to be so coopted were destroyed by exile, imprisonment and mulcting.

Those politically destroyed included media owner Vladimir Gusinsky, Boris Berezovsky and the fantastically wealthy Mikhail Khodorkovsky. Putin himself also arranged to join the ranks of the remaining oligarchs, amassing great wealth that however cannot be specified with certainty. He certainly has at least a few billions, and may be wealthy enough to place in the top ten of Forbes’ list of the wealthiest persons in the world.

Deripaska is therefore not just a random aluminum mogul. That he is allowed to be an oligarch bespeaks his subordination to Putin. Working for him is the same as working for Putin. And the AP report of Manafort’s deal with Deripaska makes this point quite clear.

One of Manafort’s charges, was to open a pro-Russian television station in the Ukraine, which however never materialized despite an $18 million payment. Deripaska charged Manafort with bad faith and last summer spoke of suing him, but once Trump won the election he said no more about a suit.

Manafort denies that the work he did for Deripaska had any political dimensions, and initially seemed to deny doing this kind of work for a powerful Russian concern at all.

Although his relationship with Deripaska seems to have ended in 2009, Manafort went on to do similar work for pro-Russian Ukrainian politician Viktor Yanukovych . Yanukovych was overthrown by the Euromaidan crowds in 2014 and now lives in exile in Russia. Russia then took back Crimea from Ukraine, which had turned hostile to Moscow (Khrushchev gave Russia’s Crimea to Ukraine when all were part of the same country in the 1950). As a result of the annexation of Crimea, the United States and Western European countries placed sanctions on Russia. Russia wants those sanctions removed. One deal ruined by the sanctions was a $500 bn. arrangement with Exxon-Mobil, i.e. with current Secretary of State Rex Tillerson.

Putin and his circle believe that Ukraine’s Orange Revolution and tilt toward the European Union was engineered by the CIA, and that it is possible that Washington may try to get up a color revolution in Moscow itself. Russia would like to break up the European Union, break up NATO, recover Ukraine as a sphere of influence, and erase US and European sanctions. These goals have been voiced by Donald Trump, Steve Bannon and others in their circle who came to power in Washington last November.

Then as the Manafort news was breaking, someone in the FBI leaked that the agency had evidence of Trump operatives being in direct contact with Russian officials and colluding to sink the candidacy of Hillary Clinton.

Rep. Adam Schiff, (D-Calif) also said Wednesday that the evidence for collusion between Trump operatives and Russian ones to hand Trump the elections was not simply circumstantial. That is, he is aware of direct evidence to that effect.

In other words, Wednesday was a very bad day for the Trump team.

Then Rep. Devin Nunes (R-Calif), chair of the House Intelligence Committee, went to see Trump to reassure him, and said publicly that the US intelligence community may have acquired communications of the Trump team because they had had non-US citizens under surveillance, and then the Trumpies called them up. Who ever is in contact with a person under investigation in this day and age also comes under investigation.

Trump took Nunes’s pronouncement to vindicate his allegation that President Obama ordered him wiretapped inside the Trump White House.

Nunes, however, continued to say that there was no evidence that Obama ever ordered that Trump be put under surveillance.

Nunes was criticized for visiting Trump and saying these things since it brought into question the integrity of the House investigation of Trump’s Russia ties. Nunes may also have revealed classified information.

Sen. John McCain immediately called for a joint select committee on intelligence to be shared by the House and the Senate.

So the evidence trail leading to Russia is getting deeper and the Trump administration has no idea what to do about it.