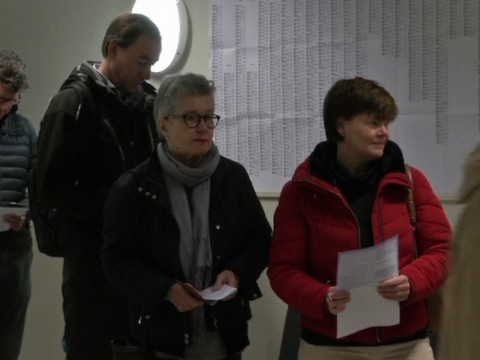 Many see the Dutch vote as a referendum on the viability of the viciously anti-Muslim, anti-migrant politics represented by Geert Wilders.

Dutch Prime Minister Mark Rutte’s center-right VVD Party remained the biggest in Parliament after an election Wednesday with 31 of the 150 seats, the first exit poll said, handing a significant defeat to the far-right Geert Wilders.

Almost 13 million voters went to the polls to choose which of the five major Dutch parties will win the most seats in Parliament in what many see as a crucial vote to determine the future of the rising wave of right-wing anti-establishment populism.

Wilders’ Party for Freedom was tied in second place with two other parties at 19 seats apiece, according to the poll by national broadcaster NOS based on interviews with voters. The turnout is forecast at 81 percent against 74.6 percent in the last election in 2012, according to NOS.

If confirmed, the result will be a relief to mainstream parties across Europe, particularly in France and Germany, where far-right nationalists are set to make a big impact in elections that will both be held this year.

Rutte got a last-minute boost from a diplomatic row with Turkey, which allowed him to take a well-timed tough line on a majority Muslim country during an election campaign in which immigration and integration have been key issues.

Dutch proportional representation means up to 15 parties could win a parliamentary seat and it could take months for Rutte to build a coalition. Full results are not expected until early Thursday morning. The final official results will be declared on March 21.

Pundits had predicted that Rutte’s party would win 24 to Wilders 22 seats, both well below the 76 needed to form a majority. Rutte had called the vote a European quarter-final, before a French semi-final and German final, and warned voters that a Wilders victory would be “the wrong sort of populism winning the day.”

Each of the main parties have said they would refuse to work with Wilders as part of any coalition — essentially eliminating any possibility that Wilders’ party will be part of any government.

Indeed, while Rutte has presented himself as an opponent of Wilders’ brand of Islamophobia, Wilder’s rhetoric has pushed Rutte’s People’s Party even further to the right, with Rutte taking out full page ads during the election demanding that immigrants “act normal or get out.”

Perhaps more worrisome still, some see the Dutch vote as a kind of referendum on the viability of the viciously anti-Muslim, anti-migrant politics represented by Wilders throughout Europe.

With upcoming elections in both France and Germany, many are wondering if Dutch voters will — in the words of Rutte in Monday’s debate — “stop the domino effect” represented by the Brexit vote in the U.K. and Donald Trump’s victory in the U.S.

In a final debate on Tuesday, Rutte proudly stood behind his decision over the weekend to expel one Turkish government minister and prevent the entry of another over concerns that their presence would “incite” both the Islamophobic supporters of Wilders as well as the local Dutch-Turkish population.