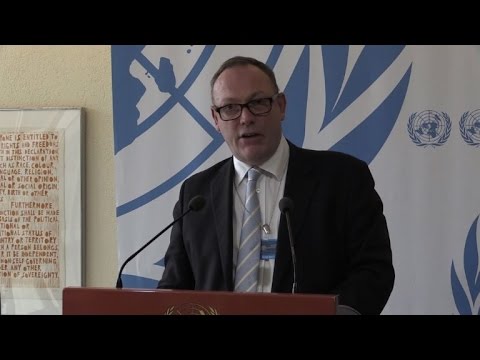 One of the more disturbing elements of Trump’s promised renewal of military dominance is a return of torture. Back on the campaign trail last year, then-candidate Trump defended torture as something that “works” and that only a “stupid person” would claim otherwise. In his typically self-serving incoherent fashion, he also claimed that suspected terrorists “deserve it anyway, for doing what they’re doing,” even if it in fact, didn’t work. As president he’s proceeded to double down on torture in both interviews and draft Executive Orders, suggesting that he will reopen CIA “black sites” abandoned by Obama.

Outgoing UN special rapporteur on Human Rights Ben Emmerson recently warned, “If…a permanent member of the Security Council is once again prepared to abandon our collective values on the pretext of defending them, then one is left to wonder whether anything at all has been achieved in the last 15 years.” President Trump’s disquieting embrace of the immoral and strategically counterproductive practice of torture, flush as it is with the brash confidence of any self-confirming system of knowledge, echoes another closed, solipsistic loop of unreality associated with Trump: fake news.

To compare torture with fake news might seem crude. Torture is obviously more grisly and intimately degrading to the human person. Fake news, as insidious as it might be, is something that people are free to accept or reject with the only immediate consequence being how well their opinions are formed. But the two actually have much in common. They both operate as closed, self-referential loops that function to tell the interrogator/consumer exactly what they want to hear. The immediate effects are “bad intelligence”, usually in the form of wish-fulfillment (fake news wouldn’t be so popular if it offered a competing narrative to mainstream news that appealed less to the intended audience). But the longer term effects are more destructive. The paranoid logic of both fake news and standardized torture undermine the fourth estate and the military/intelligence communities respectively. They both weaken America.

People who are being tortured don’t tell you the truth. They tell you whatever they think you want to hear. Torture simply isn’t a reliable way to find the truth. The evidence for this is so numerous and overwhelming that a single quote from a single source would almost be misleading, but nevertheless has a kind of reference value. Dean Rusk Scholar and Professor of International Relations at the University of Georgia, who has herself participated in DoD-funded studies of the efficacy of torture, writes, “…all the experts I know say torture does not work. Lots of evidence – collected from lots of countries and lots of terrorist groups over a long period of time – says the exact opposite: using torture will actually make our country more vulnerable to terrorists and terrorist attacks.”

America’s contemporary torture program came into being when two psychologists previously hired to run the Air Force SERE (Survival, Evasion, Resistance, Escape) training program, used the same techniques meant to loosely replicate enemy torture methods, to kickstart the CIA’s interrogation program for the Global War on Terror. These were not experts in interrogation, but people schooled in replicating the torture methods of enemy countries who don’t abide by the Geneva Convention. In other words, the government hired two non-experts to create a program that was both ineffective and illegal.

Fake News, mostly because of the Internet and the economics of distribution, doesn’t really become much of a factor in American politics until the social media revolution of the last decade. It found in Trump the anti-establishment candidate perfectly suited to carry the banner of paranoia. Not overly bothered himself by the search for objective truth, Trump has a history of spouting off delusional conspiracy theories, such as Ted Cruz’s father being involved with the JFK assassination, that Vince Foster was killed by the Clintons, and that Barack Obama is an imposter named “Barry Soweto”, just to name a few.

With this in mind, we can better understand what Trump means when he says that torture “works”. Because for Trump, “working” wouldn’t mean being ethical, legal, or even effective at extracting objective truth. Instead, it would mean that torture is another method by which he can find expression of a reality he already believes exists. The results of torture wouldn’t be revelation, but reflection. An infinite refraction of paranoid delusions with nothing new coming in from the outside.

Fake news and torture both reinforce whatever epistemological reality we want asserted. It’s a closed loop of information that, since it can’t defend itself on objective grounds, suggest that the common terms ideas are usually debated on are somehow spoiled. That the game is rigged. You can only truly understand what the New York Times is communicating after it has been eviscerated by your favorite paranoid conspiracy youtuber. You can only truly believe a detainee after they have had electrodes attached to their genitals. And what both are communicating is always what you already want to hear.

That fake news is a (counterfeit) representative of the fourth estate, and that American military and intelligence agencies are torturing detainees, lend a veneer of institutional respectability to their pursuits. Fake news sites are seen as put upon outsiders, reclaiming the truth for the American people. Interrogators using torture are seen as clear-eye patriots doing the unpopular but necessary thing to make sure Americans are safe. This self-congratulating paranoia extends to the people who consume fake news and support torture. Assuming they’re being intentionally deceived, they see these extreme measures as their last hope in a crumbling and defunct world. Sadly, this illusion has the potential to become a self-fulfilling prophecy, contributing to the creation of the dangerous environment they already think exists. Torture makes America less safe. Fake news makes America less informed. Both are succor for scared, paranoid people.

Scott Beauchamp is a veteran and writer based in Portland, Maine. His work has appeared in Bookforum, The Washington Post, Al Jazeera, The Baffler, and The Paris Review.