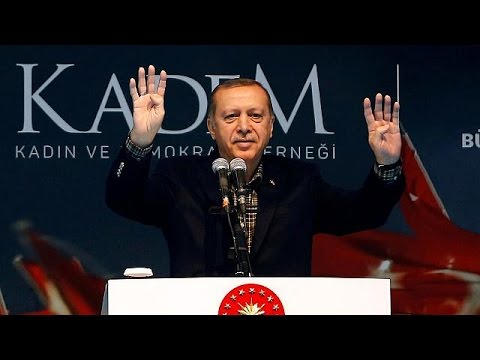 Normally, the accusation is reversed. Erdogan undoubtedly knew that when he accused Germany on Sunday of “fascist actions” typical of the Nazi era, for cancelling rallies to drive support for an April referendum granting himself broad new powers.

Yet, the significance of reversing the hackneyed War on Terror reference, ‘Islamofascism’, got lost in the media frenzy, as Germany’s political echelon recoiled in horror at being tarred with such a deliberately offensive jibe.

Few slurs have been more misused of late in German politics, in reference to Merkel and her coalition’s diversity-friendly politics and response to the refugee crisis, coming, more often than not, from right-wing extremists.

But here was one of the world’s most powerful Muslim leaders, dishing out the same dirt. The Turkish president might as well have been repping for the populist Alternative für Deutschland party. The rhetoric was the same.

Though Merkel and her lieutenants did their best to appear conciliatory, there was an uncharacteristic amount of condescension in their responses, which could not help but highlight the sense of superiority the Turkish president was targeting.

One unnamed CDU official went so far as to call Erdogan “childish”, while a CSU leader predictably went for the jugular, calling him the “despot of the Bosporus”, as though to confirm the Turkish leader’s point that the Germans are disrespectful.

Yet, the affair did what it was supposed to do. Germany’s political echelon walked right into Erdogan’s trap and helped legitimate the sense of siege and victimisation the AKP chief continually appeals to in his efforts to scale back Turkish democracy.

It’s impossible to have imagined the Germans responding differently. This was a deliberately crass manoeuvre, meant for domestic political consumption, with a very limited scope for enlightened responses. Particularly during an election season, in which immigration, and Islam, are enormously charged topics.

Predictably, little, if any deference was paid to how it would help tarnish the image of Turkish Germans and reinforce resentment of Muslims. Inevitably, Erdogan’s insouciance would be a boon to German populists, and those members of Merkel’s governing CDU party who remain uncomfortable with her pro-refugee agenda.

But you get what you pay for. To have assumed that the Turkish president would not impact or harm this German government’s efforts to promote tolerance and the right to asylum remains a terrible mistake, in keeping with the EU’s head-scratching reliance on Erdogan to help manage the refugee crisis.

How could Germany not expect such rhetoric from the man who deliberately reignited Turkey’s civil war with its Kurdish population? Aside from being its own obvious refugee driver, the nationalist ideology behind it smacks entirely of fascism. The exact kind that Erdogan reproaches Germany for remaining guilty of.

This ought to be the biggest takeaway from Erdogan’s charge. The fascism tag remains relevant, not just because he is using it as cover for his own politics, but because many of the crises associated with it have returned and are being contributed to, in different ways, by everybody.