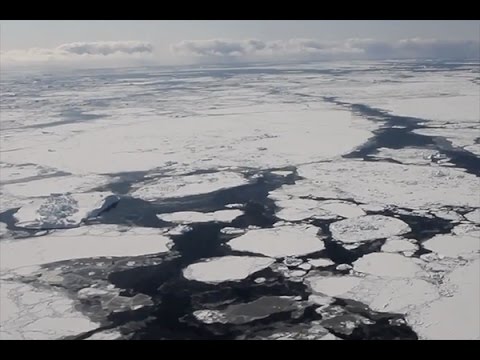 Scientist have discovered that Antarctica, like Greenland, is melting from the inside out because of climate change. The drainage of huge quantities of water threatens to exacerbate rising sea levels, which could result in the flooding of coastal cities worldwide.

Two recent studies published in the journal Nature detail the melting and explain what it could mean for sea-level rise.

Satellite and military aircraft photos documented hundreds of meltwater channels around the perimeter of Antarctica in the first study. Streams deep within the continent’s frozen interior were detected. Ponds of meltwater surpassing 4,000 feet above sea level, where no one expected to encounter liquid H2O, were also catalogued.

Jonathan Kingslake, a glaciologist at Columbia University and lead author of the first study, stated, “Even though people kind of knew there were melt ponds around, they really didn’t know that water could move long distances across the surface.” He added that streams “take water away from the surface of the ice sheet and actually export it all the way into the ocean… and we didn’t really realize this happened at all.”

Interior meltwater can burrow into ice shelves, breaking apart massive chunks of ice. It can also lubricate a glacier’s underside, hastening its passage to sea.

While Kingslake claims that the current drainage system appears “quite stable at the moment,” he reiterated that “predictions for the future, for this century, are that melt rates will double in response to global climate change. What we really need to know is how is that going to impact the stability of the ice sheet and our predictions of sea-level rise.”

The second study, authored by Robin Bell, a geophysicist at Columbia University, confirms the prognosis of the first study. “When we turn the temperature up — of the atmosphere — we’re going to make more melt, and it’s going to get caught in ponds, and it’s going to act like a jackhammer and ruin the ice shelf,” she said.

Bell, however, remains hopeful. She confirmed that meltwater channels have maintained West Antarctica’s Nansen Ice Shelf intact by draining to the ocean. Had the meltwater amassed on the surface, it would have warmed the ice resulting in additional melting, she said.

“Plumbing on our planet matters, and plumbing on the top of the ice sheet matters,” Bell said.