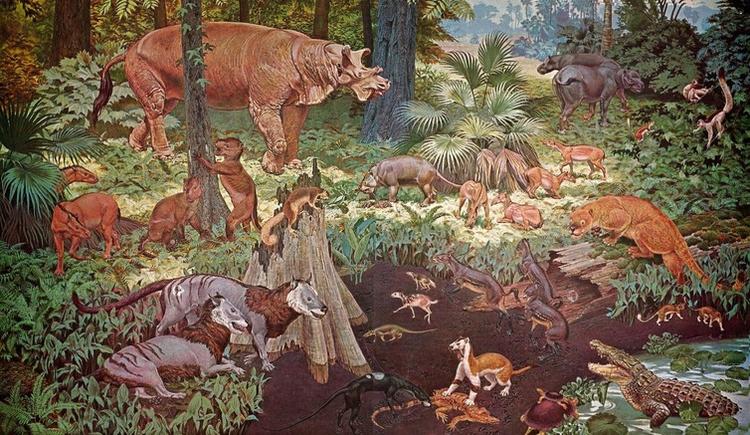 A lot has happened on Earth since 500,000,000BC – continents, oceans and mountain ranges have come and gone, and complex life has evolved and moved from the oceans onto the land and into the air. Most of these changes occur on very long timescales of millions of years or more. However, over the past 150 years global temperatures have increased by about 1℃, ice caps and glaciers have retreated, polar sea-ice has melted, and sea levels have risen.

Some will point out that Earth’s climate has undergone similar changes before. So what’s the big deal?

Scientists can seek to understand past climates by looking at the evidence locked away in rocks, sediments and fossils. What this tells us is that yes, the climate has changed in the past, but the current speed of change is highly unusual. For instance, carbon dioxide hasn’t been added to the atmosphere as rapidly as today for at least the past 66m years.

In fact, if we continue on our current path and exploit all convention fossil fuels, then as well as the rate of CO₂ emissions, the absolute climate warming is also likely to be unprecedented in at least the past 420m years. That’s according to a new study we have published in Nature Communications.

In terms of geological time, 1℃ of global warming isn’t particularly unusual. For much of its history the planet was significantly warmer than today, and in fact more often than not Earth was in what is termed a “greenhouse” climate state. During the last greenhouse state 50m years ago, global average temperatures were 10-15℃ warmer than today, the polar regions were ice-free, palm trees grew on the coast of Antarctica, and alligators and turtles wallowed in swamp-forests in what is now the frozen Canadian Arctic.

In contrast, despite our current warming, we are still technically in an “icehouse” climate state, which simply means there is ice on both poles. The Earth has naturally cycled between these two climate states every 300m years or so.

Just prior to the industrial revolution, for every million molecules in the atmosphere, about 280 of them were CO₂ molecules (280 parts-per-million, or ppm). Today, due primarily to the burning of fossil fuels, concentrations are about 400 ppm. In the absence of any efforts to curtail our emissions, burning of conventional fossil fuels will cause CO₂ concentrations to be around 2,000ppm by the year 2250.

This is of course a lot of CO₂, but the geological record tells us that the Earth has experienced similar concentrations several times in the past. For instance, our new compilation of data shows that during the Triassic, around 200m years ago, when dinosaurs first evolved, Earth had a greenhouse climate state with atmospheric CO₂ around 2,000-3,000ppm.

So high concentrations of carbon dioxide don’t necessarily make the world totally uninhabitable. The dinosaurs thrived, after all.

That doesn’t mean this is no big deal, however. For a start, there is no doubt that humanity will face major socio-economic challenges dealing with the dramatic and rapid climate change that will result from the rapid rise to 2,000 or more ppm.

But our new study also shows that the same carbon concentrations will cause more warming in future than in previous periods of high carbon dioxide. This is because the Earth’s temperature does not just depend on the level of CO₂ (or other greenhouse gases) in the atmosphere. All our energy ultimately comes from the sun, and due to the way the sun generates energy through nuclear fusion of hydrogen into helium, its brightness has increased over time. Four and a half billion years ago when the Earth was young the sun was around 30% less bright.

So what really matters is the combined effect of the sun’s changing strength and the varying greenhouse effect. Looking through geological history we generally found that as the sun became stronger through time, atmospheric CO₂ gradually decreased, so both changes cancelled each other out on average.

But what about in the future? We found no past time period when the drivers of climate, or climate forcing, was as high as it will be in the future if we burn all the readily available fossil fuel. Nothing like it has been recorded in the rock record for at least 420m years.

A central pillar of geological science is the uniformitarian principle: that “the present is the key to the past”. If we carry on burning fossil fuels as we are at present, by 2250 this old adage is sadly no longer likely to be true. It is doubtful that this high-CO₂ future will have a counterpart, even in the vastness of the geological record.