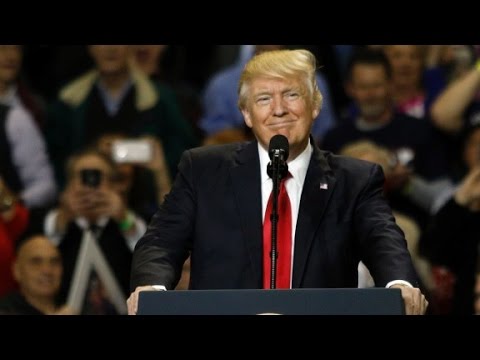 As the sun rises on the 11th full week of the disgrace-riddled Barnum & Bailey dystopia known as the Trump Administration, revelations about the Russia scandal continue to do fresh damage. From Michael Flynn’s failure to note his status as a lobbyist for the Turkish dictatorship to the increased media interest in Trump’s longstanding business ties to Russian mobsters, this is the scandal that won’t die. A clear majority of the public wants a real investigation.

You know that the President is in serious trouble now that Republican operatives are aggressively pushing a counter-narrative to the endless Putin fiasco. The President, you see, is the innocent victim of a far-reaching conspiracy hatched by Obama appointees in the subterranean mineshafts of the Deep State. Michael Flynn was unmasked by malicious actors in the intelligence community, which should obviously make us not care what he did or that Trump blithely appointed him to the most important security post in the land. The word ‘unmasked’ itself is evocative. It is designed to remind you of the denouement of a Scooby Doo episode.

This counter-narrative is almost certainly flimsier than an IOU from Accounts Payable at the Trump organization. But let say it’s not. Let’s say that, in fact, a senior Obama official maliciously leaked classified information about Michael Flynn to the Washington Post and the New York Times. Let’s say that Flynn himself is not a malignant actor but just kind of a gullible knucklehead who lost his marbles a few years ago but is basically harmless. Let’s say further that the investigations into the Trump campaign were partially or entirely politically motivated and turn up nothing of consequence.

In other words, the most innocent explanation of Trump’s ties to Russia turns out to be true – the relationships are incidental and related to his business of building luxury monuments to unearned wealth, dirty-talking working people out of their life savings and selling garish real estate to money launderers and organized criminals. Yeltsin-era Russian capital kept him drifting just above the water line for years, and he ended up in their social networks and thus is predisposed to treat them favorably.

Where would that leave Trump, politically speaking? The same place he is now: Paddle-free in a small, filthy river.

Even if Carter Page, Paul Manafort, Michael Flynn and Roger Stone were not working directly with Julian Assange to crater the Clinton campaign using Macedonian Facebook posts and looted emails, even if Putin doesn’t have pornographic kompromat on Trump stashed in a Sochi safe house, even if Trump himself isn’t toupée-deep in Kazakh gangster cash and trafficked Moldovan sex slaves, even if the incredibly shrinking Secretary of State Rex Tillerson isn’t working secretly to open up Arctic oil fields for make benefit of Exxon-Mobil and even if Devin Nunes isn’t performing the worst cover up since Mohammed Salameh tried to get the deposit back on the rental van he used to almost blow up the World Trade Center, we are still left with a deeply troubling reality: Trump is either too stupid to know that he is constantly surrounding himself with grifters, fabulists, hacks, mediocrities and borderline criminals, or he knows exactly who these people are and works with them anyway. He is either the kind of guy who falls for Nigerian email scams or he is the Nigerian email scammer or he is the guy who gets rich by floating the people doing the Nigerian email scam.

This is where we are with Trump. The Russia scandal could disappear tomorrow morning like an investigative journalist in Moscow and it wouldn’t help save this gas-filled Hindenburg of an administration from certain implosion.

Trump may or may not be the Siberian Candidate (personally, I’d like to know one way or the other), but he’s still a woman-hating creeper so loathsome that he’s trailing a 40-year-long trash slick of financial, emotional and marital wreckage, an intellectual dilettante so disinterested in policy and so blasé about the sacred job he has been given that he can’t be bothered to read or learn anything about the details of the appalling bills his congressional allies are pushing, an administrator so inept that almost every misfit toy in his miscreant entourage is feuding so intensely it’s like someone gamified leaking and backstabbing for them, a leader so bereft of self-awareness that he complains about the House Freedom Caucus on Twitter even though he subcontracted his entire domestic agenda to HFC alum Mick Mulvaney and his allies at the Heritage Foundation, a human so devoid of compassion and public spirit that he treats immigrants, Muslims, women and poor people like Ed Harris treats the robot hosts on Westworld, a politician whose basic instincts are so terrible that his regime breached the Three Mile Island of 35% approval ratings years before any other president got the first hint of radiation on his political Geiger Counter, a billionaire whose roster of associates is so thin that he keeps turning to his own mediocre children to simultaneously enrich themselves and staff his sinking neptocracy and an insomniac so old and tired and dyspeptic and bored with his job that he needs to take a vacation to his Florida safe space every single weekend.

Whatever happens with the Russia scandal, Trump’s first months in office will always be known as the Hundred Days From Hell. Not only has the President gratuitously embarrassed himself and our country on an almost hourly basis with his inscrutable, childish Tweets and his rambling, Gaddafi-like public appearances, he also doesn’t have a single significant piece of legislation to show for it, nor are his paymasters in Congress particularly close to passing their first meaningful law since they took over the House 6 years ago. His National Security Advisor resigned in disgrace, his Attorney General lied under oath and recused himself from his first major investigation and his Secretary of Health and Human Services is almost certainly headed for a major corruption scandal. He’s blown through White House staffers quicker than Charlie Sheen through a stash of cocaine, he’s repeatedly undermined his own cruel Executive Orders with loose-lipped Twitter inanity and the determination of his minions to blab the truth (hint: it’s about Muslims) to the nearest Fox reporter, and he’s cashed in a presidency’s worth of political capital to pursue a pointless vendetta against a media that otherwise would have been perfectly content to normalize him. He is almost universally despised and ridiculed, both by a large majority of the American people, but also by the leaders of nearly every country in the world.

If you’ve ever spent time in an authoritarian country, you’ll notice quickly that dictators enjoy appointing their idiot children to important bureaucratic positions. Many tyrants simply cannot trust anyone else not to stab them in the neck while they sleep. This is how Gamal Mubarak ended up in charge of Egypt’s ruling National Democratic Party, how the anodyne genocidaire Bashar al-Assad was given a country to destroy for his 34th birthday and how Saddam Hussein’s maniac sons were handed control of important ministries and carte blanche to commit mass murder. Trump’s son-in-law Jared Kushner, a man who (of course) has no political experience whatsoever, is now one of Trump’s senior advisors, and recently told the world that the government should be run “like a great American company.” The problem is that many businesses are not very well conceptualized at all and therefore frequently fail. Others are brought low by precisely the kind of garbage leadership this country will be living through for the next four years. Remember: Enron was a great American company. So was Bear Stearns. What you are seeing today is less government by iPod-era Apple and more government by the kind of people who open an artisanal dog treat store on a side street with no foot traffic.

The achingly sad collection of wanton plagiarists, shameless self-promoters, seventh-tier Hungarian PhD-holders, unapologetic sexual predators, talentless Breitbart beat reporters, ruddy-faced nihilists and photogenic trust fund babies currently running the United States of America would have difficulty successfully operating a 24-hour Chipotle franchise next to a marijuana bar. They can’t even take a picture together in the Oval Office without forgetting occasionally to include a woman in the frame so that Americans are not reminded on a daily basis that they are governed by a clique of incompetent man-jerks.

Russia? That’s the least of this crowd’s worries. At this rate, our failing president will look fondly back on this 35% approval epoch as his halcyon days. So lift your morning coffee mug in a spirited toast of nostroviya to the worst presidency you will ever have the misfortune of living through.

May it be mercifully brief.