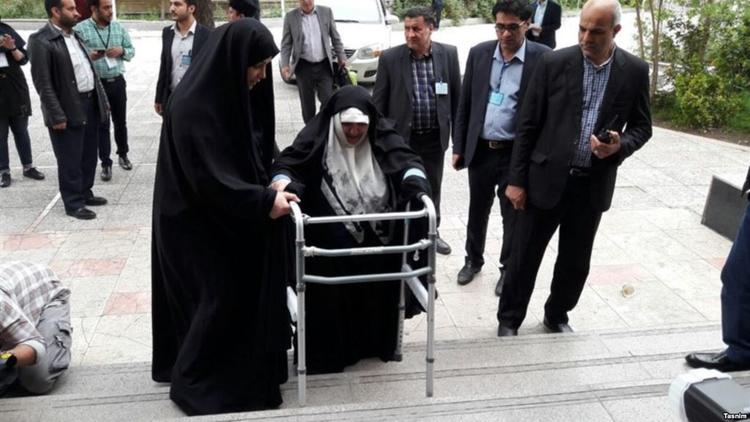 Update: Ms. Taleghani has been disqualified. Her journey is still amszing.

On April 14, a tiny, frail-looking woman wearing a chador and using a walker made her way slowly up the stairs of Iran’s Interior Ministry in Tehran.

Seventy-three-year-old Azam Taleghani was there to register as a candidate in the May 19 vote for Iran’s presidency. 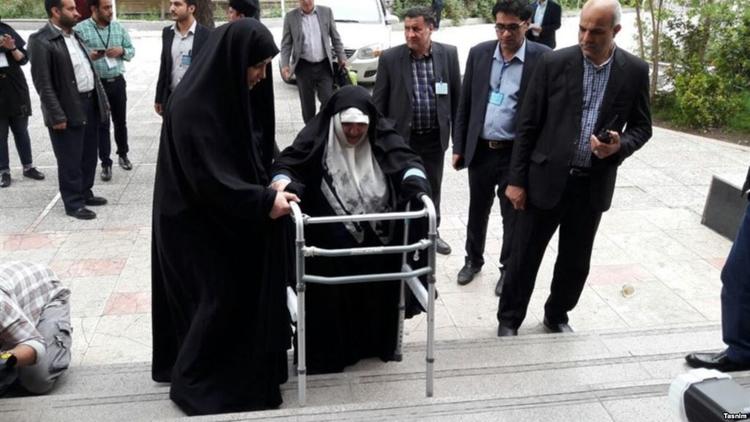 Azam Taleghani (center) arrives at the Iranian Interior Ministry on April 14 to register as a candidate in the country’s presidential election.

She’s hoping the third time is the charm.

In 1997, Taleghani, then a 53-year-old editor and women’s rights advocate, made history by becoming the first woman to register as a candidate for president.

The move was aimed at highlighting state discrimination in the Islamic republic, where no woman has ever been allowed to run for president.

“It is the fate of half of Iran’s population that is at stake,” she said then.

Twenty years after her initial effort, Taleghani is the most prominent of the 137 women who have registered as candidates for the vote. She knows she is likely to be rejected once again.

Taleghani’s move is again a direct challenge to hard-liners in control of the Guardians Council, the unelected body that is in charge of vetting candidates for presidential and parliamentary votes. The council has in the past rejected all female candidates, based on a strict interpretation of the country’s constitution.

“Women make up 50 percent of the Iranian population, so the country deserves at least one female candidate,” Taleghani told the German news agency dpa on April 17.

But Taleghani, the daughter of prominent revolutionary cleric Mahmud Taleghani, said she would not be “broken” by another rejection by the Guardians Council and that she would continue to fight for women’s rights.

Speaking to journalists while registering her candidacy on April 14, Taleghani said she is pressing for a ruling on whether the Iranian Constitution truly bars female candidates from running for president. The controversy centers around the interpretation of a single word.

​”I’ve come so that the issue with political ‘rejal’ can be resolved,” she said.

Article 115 of the Iranian Constitution says the president should be elected from among the “religious and political rejal.” Rejal, which comes from Arabic, means “personalities.”
Azam Taleghani has long been one of Iran’s most active women’s rights campaigners. (file photo)

Azam Taleghani has long been one of Iran’s most active women’s rights campaigners. (file photo)

Guardians Council members have ruled in the past that the word rejal refers exclusively to men.

But a spokesman for the council, Abbasali Kadkhodayi, said in December that it had not yet come to a conclusion regarding the issue of rejal for the May 19 vote.

“‘Political personalities’ in Arabic is an idiom that refers to personalities with expertise and managerial [experience] who are politically savvy,” Taleghani said in an April 15 interview with the New York-based Center for Human Rights.

Taleghani, secretary-general of the Islamic Revolution Women’s Society, said the Guardians Council has never officially announced the reason that it prevents women from running for president.

“The Guardians Council has never said the reason for the disqualification of women is that they’re women, even though this has been the understanding of the majority in society,” she said. “For example, in my case, [the council] can resort to my critical political activities to disqualify me.”

Many are praising Taleghani for trying to run for president again, including Iran’s vice president for women’s affairs, Shahindokht Molaverdi. She said Taleghani’s move sends a clear message to all, “particularly men and the authorities, that they should also see the competent women of the country.”

Taleghani has for years been among Iran’s most active campaigners for women’s rights, challenging hard-line interpretations of Islamic laws that limit the rights of women.

She was one of the first women to become a deputy in the Iranian parliament following the 1979 Islamic Revolution.

For years, she edited the magazine Payam Hajar, which questioned issues such as polygamy and published articles in favor of more rights for women, including equal rights to inheritance. The magazine was shut down by the authorities in 2000 as part of a crackdown on the liberal and reformist press.

In 2003, she launched a solo protest outside Evin prison in Tehran to protest the treatment of political prisoners following the death in custody of Iranian-Canadian photojournalist Zahra Kazemi.

She was also critical of the brutal state crackdown that followed the 2009 disputed reelection of former President Mahmud Ahmadinejad.

The trio has been under arrest since 2011 for repeatedly challenging authorities over Ahmadinejad’s reelection and for highlighting human rights abuses.

In a 2013 interview, the outspoken Taleghani said she believes that Iran’s revolution has strayed from its original path to bring Iranians freedom and justice.

“The main principles of the revolution that were highlighted in slogans and were promised to people have not been achieved,” she said.

And on April 18, Taleghani criticized some Iranian politicians for spouting anti-Semitic rhetoric, saying that they should “differentiate” between criticizing Israel’s government and insulting Jews. She added that any denial of the Holocaust is the result of ignorance.

Shadi Sadr, a prominent women’s rights activist who heads the London-based rights group Justice For Iran, says Taleghani has bravely used her position to repeatedly highlight the lack of political opportunities for women in Iran.

“She has been consistent and she has been also using her political background and that of her [father] to bring attention to this issue,” Sadr told RFE/RL in a telephone interview.

She said that this year’s image of Taleghani registering while using a walker was particularly powerful.

“The photo reminded us that [Taleghani] is now elderly. She suffers from ailments, and she has been pushing for [women to be able to run] for years,” Sadr said. “Yet the discrimination is still here.”