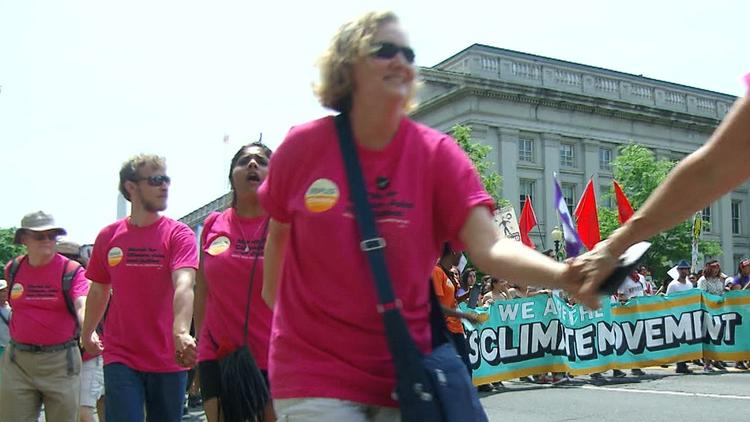 An estimated 200,000 climate protesters rallied in Washington, D.C., on Saturday, braving record temperatures in the 90s, well above the average temperature for April 29 in the national capital. They were allowed to surround the White House from a distance. The protesters were pushing back against the pro-Warming policies of President Donald J. Trump, which favor burning massively increased amounts of coal, gas and oil, putting extra billions of metric tons of carbon dioxide (CO2) into the atmosphere over time.

At the same time that protests were mounted in cities across the US and the world, the Trump Environmental Protection Agency under denialist, shyster lawyer, and generally miserable human being Scott Pruitt removed its Climate Change web page.. When the fox is in charge of the hen house, the first thing he does is to oil the hinges so the hens can’t hear him coming through the gate. So the climate marchers got stabbed in the back, predictably, by the very government agency that should be protecting their children from the ravages of pollutants like carbon dioxide.

State legislators, bought and paid for by Big Carbon, are plotting to try to stop the march to solar power and other renewables.

CO2 is a deadly greenhouse gas, which is responsible for having turned Venus into a scorching Gehenna where lead melts on the surface. Human beings evolved during the past 200,000 years, when carbon dioxide levels in the atmosphere have been low, roughly 270 parts per million. Since 1750 and the advent of the Industrial Revolution, human beings have increased CO2 in the atmosphere to 410 parts per million. This is the fastest accumulation of so many billions of tons of CO2 ever in the earth’s history. CO2 has fluctuated in the distant past, but over millions of years. A level of 410 ppm is consistent with massive warming and seas that are dozens of meters higher than now, which would submerge Florida, Louisiana, the Egyptian Delta, and most of Bangladesh, among other catastrophes. This warming and those disasters will happen over time rather than immediately, since the seas, for instance are cold and slow-moving and will take time to warm up consistent with the current greenhouse effect.

In order to muddy the waters and help Exxon-Mobil and the Koch Brothers, the New York Times sold out and hired climate denialist Bret Stephens, who abruptly tossed a set of old bromides about the uncertainty of climate change onto the editorial page.

Make no mistake about it. Bret Stephens is shamelessly purveying a falsehood. His like deliberately and skillfully deploy the techniques the cigarette companies used to deflect the science on lung cancer. It is known that liberals are open-minded, willing to concede the other person’s point of view, willing to entertain self-doubt. Denialists, like a criminal who profiles the victim before striking, have been trained to play on these traits.

But let’s get this straight. There is no more doubt in the scientific community about the reality of human-caused climate change than there is about the law of gravity. Perhaps Mr. Stephens and his ilk should step off their balconies every once in a while to test whether the arrogant Mr. Newton and his seventeenth century mathematics could not reasonably be debated on the certainty that they will fall to their deaths every time.

On climate change, there are no reasonable grounds for doubt about either the reality or the costs. An eighth-grade science experiment can prove that CO2 is a greenhouse gas. Does Mr. Stephens think Venus is so hot because of the nitrogen in its atmosphere? Or could it be the massive amounts of CO2? Are there really grounds for a debate here?

I’m a historian, and have taught history and climate change. And, actually history is highly relevant here. Scientists have gathered ice cores and have developed proxies that allow them to estimate CO2 levels in past ages. And we can correlate those carbon dioxide levels with sea level, stationary massive storms and droughts, and other kinds of events that accompanied climate change in the past. Somebody tried to troll me that if CO2 levels fluctuated in the past naturally, how do we know that humans are causing today’s changes. That’s easy. Past fluctuations were mostly driven by volcanic activity– lots of it, over millions of years. There hasn’t been anything like that going on since 1750 (you would have noticed), and nor could volcanic activity change the levels so rapidly (they never have, ever before). Current volcanic activity is putting less that 1% as much CO2 into the atmosphere as human burning of coal, gas and oil.

Bret Stephens at the NYT is the essence of fake news.

The New York Times gave us the Iraq War with phony stories about aluminum tubes and Iraqi nuclear bomb projects, and biological weapons on bumpy Winnebagos on Iraq’s potholed roads. The paper has a lot of great and honest reporters, but a little bit of arsenic can ruin an otherwise fine meal.

What I can’t understand is why people don’t protest in front of coal plants and embarrass the utilities running them. They are the dirtiest, most dangerous things on the planet and all of them need to be closed down yesterday if we are to get a handle on climate change. Trump can’t promote coal mining if there aren’t any plants burning the noxious stuff (it is laced with mercury, a notorious nerve poison, quite apart from destroying the planet with CO2).