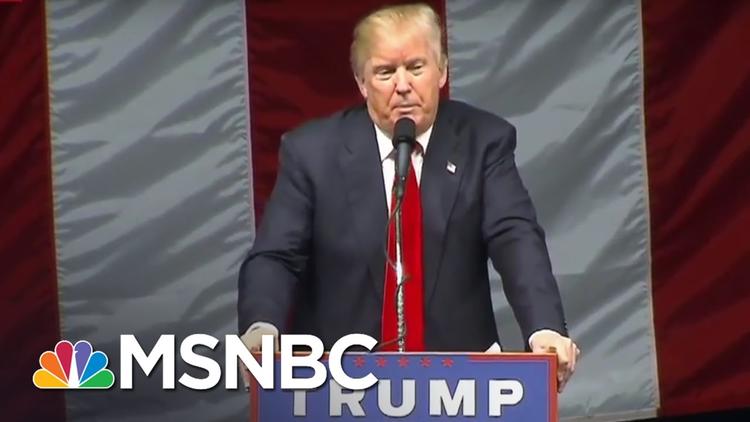 It’s been a week now since Donald Trump once again became our president.

Here’s how it happened.

After he unleashed missiles on a Syrian airfield, members of Washington’s national security establishment and elite pundits swooned. Top Democrats and Republicans led the way. Good soldiers all in the military-industrial-political complex, they stood smartly at attention and saluted the commander-in-chief for sending a message to the world, although exactly what the message meant remains far from clear.

The headline above Glenn Greenwald’s story at The Intercept summed up the response: “The Spoils of War — Trump Lavished with Media and Bipartisan Praise for Bombing Syria.” The hawkish Hillary Clinton, who long had been critical of Barack Obama for not bringing Bashar Assad to heel, “appeared at an event” — and this was before the bombing even happened! — “and offered her categorical support for what Trump was planning.”

Up in the choir loft, the media and pundits sang as one from the official hymnal, praising Trump’s “presidential moment” and transforming him from a pathetic dunderhead suffering from narcissistic personality disorder into the Lord of Hosts. It was CNN’s Fareed Zakaria who pronounced the decision to fire away as the “big moment” when “Donald Trump became president of the United States.”

The theatrics were perfect. The Pentagon shopped to the media a video of the missiles as they were lofted up and away. MSNBC’s Brian Williams was among those moved by the aesthetics of violence: “We see these beautiful pictures at night from the decks of these two Navy vessels in the Eastern Mediterranean. I am tempted to quote the great Leonard Cohen: ‘I’m guided by the beauty of our weapons.’”

When I heard those words, I thought back to that night in 2003 when another president lit up the skies over Baghdad with the “shock and awe” of his air attack on Iraq. Suddenly the press was talking about George W. Bush as if he were George Washington, George Marshall and George Patton rolled into one. A touch of George III came later, as our newly refurbished president donned a flight suit and strutted aboard the aircraft carrier with the banner behind him that read: “Mission Accomplished.” Not quite.

Then a more recent scene and another miraculous moment came to mind, from six weeks ago — Feb. 28, to be exact. Donald Trump spoke to a joint session of Congress. He paused, pointed to the balcony and recognized the widow of the Navy SEAL who was killed during a raid on an alleged terrorist compound in Yemen, the very first military mission dispatched into harm’s way by the brand-new commander-in-chief himself.

That mission went badly, so much so that at least two dozen local civilians, including women and children, were killed. Trump did not mention them. He focused on honoring the grieving widow in the balcony who was trying, unsuccessfully, to hold back her tears as wave after wave of applause rolled across the House chamber and ricocheted from wall to wall.

Time magazine’s White House correspondent tweeted that the speech was the “clearest example Trump is beginning to own and understand the powers of the office.” The next day, The Washington Post’s White House bureau chief tweeted, “This is the best morning of Donald Trump’s presidency. He is basking in positive pundit reviews. All that tumult [of the previous month] feels like yesteryear.” Politico’s man on the scene admiringly described it in a tweet as Trump’s “Reaganesque moment.”

And over at CNN, liberal commentator Van Jones called it

“one of the most extraordinary moments you have ever seen in American politics, period… And for people who have been hoping that he [Trump] would become unifying, hoping that he might find some way to become presidential, they should be happy with that moment… He did something tonight that you cannot take away from him. He became president of the United States.” [italics mine]

I understand what these people were saying — that although constitutionally Trump had become president when he was inaugurated four weeks earlier, he had not metaphorically made the leap into the persona expected of him. He did not fit the mythical image of a president we prefer over the real thing. Above all, he had yet to put on a sufficiently good show (the crowd at the inauguration was not much larger than his two undersized hands clasped together). Nor had the establishment pundits fully weighed in with any semblance of support, and without their blessing, Trump was obviously just a usurper who could barely read a speech, even with a teleprompter.

But after the dramatic spectacle of that Feb. 28 speech, the white smoke rose from the chimney: America at last had a president who could act the part even if his cronies were ripping out the plumbing, stripping the wiring and carting it all off in Uber cars.

Alas, the euphoria of that night was not to last. Once again it evaporated as fast as the truth on Kellyanne Conway’s lips. Trump quickly returned to governing by anarchy. Chaos again ruled the White House. Wrecking crews installed by Bannon and Priebus at federal agencies continued their bloodbaths. Trump’s state of mind once again became the subject of much speculation. Trump’s health care “reform” went down in flames. His proposed budget exploded on contact with reality. Conflicts of interest littered the city like cow patties in a pasture. The atmosphere stank like a fetid swamp, the one Trump has made no attempt to drain. And his popularity dropped lower than any president so early in the game.

Yet after the bombing a week ago, Trump towers again. Fifty-nine cruise missiles — tomahawks — were all it took.

Mind you, there is little to show for the attack. The airbase was open the very next day. Russia’s Putin and Syria’s Assad may be forced into a tighter embrace as Donald chills on Vladimir — and vice versa.

And really, what was the big deal, anyway? As Glenn Greenwald wrote,

“The CIA has spent more than a billion dollars a year to arm anti-Assad rebels for years, and the US began bombing Syria in 2014 — the seventh predominantly Muslim country bombed by Obama — and never stopped. Trump had already escalated that bombing campaign, culminating in a strike last month that Syrians say destroyed a mosque and killed dozens. What makes this latest attack new is that rather than allegedly targeting terrorist’s sites of ISIS and al-Qaida, it targets the Syrian government — something Obama threatened to do in 2013 but never did.”

Trump will be tempted to do it again, because he likes big booms and especially if such thunderbolts gain him adulation from hard-liners in the national security complex and the press.

There will be opportunities because even if Assad stops using chemical weapons, he will no doubt continue to pummel what remains of Syria’s civilian population. As Ilan Goldenberg, a former State Department official, told The Huffington Post: “You’ll see many more pictures of beautiful [Syrian] babies [dying] on TV – specifically to humiliate the United States and show the fecklessness of military action.” In other words, Trump is about to find out why Obama avoided military intervention in Syria.

Meanwhile, here at home, our institutions bend and buckle and approach the breaking point from benign, blind or willful neglect — and above all, from a leadership vacuum.

One example: our transportation infrastructure. A week ago, as Trump & Company plotted the attack on the Syrian airfield, here in the Northeast corridor of America’s vast transportation system a second train derailment in two weeks again plunged hundreds of thousands of commuters into nail-biting, life-upending chaos.

It began as a minor derailment at Penn Station, the hub of our transit network, but like a spider web, everything transit-related is so connected in these parts that the upheaval quickly spread to Long Island and New Jersey and then to the corridor between Boston and Washington, DC. The New York Times called the calamity “another reminder of the decrepit, tenuous state of much of the region’s infrastructure and transit systems.”

You would think this would be a priority of Donald Trump. He grew up in New York. He knows the crucial role of mass transit. He spins a good spiel on infrastructure. Yet for all this, he has rejected an Obama-era program that would have funded long-range improvements to our regional infrastructure, even as he proposes huge tax breaks for builders and real estate developers like himself.

He also wants to increase defense spending by $54 billion and proposes to slash non-military spending by a corresponding amount. This includes slicing funds for Amtrak and transit and commuter rail programs across the country. The National Association of Rail Passengers estimates the cuts of federal funding for Amtrak’s national network of trains would drastically affect service to 23 states and 144 million Americans, many of them in rural towns in the Midwest and the South, including my home town in East Texas which went for Trump by an overwhelming majority — and I mean overwhelming.

How is it Trump seems to care the least for the very folks who voted for him? Not a day passes that he doesn’t betray some of them.

And instead of bombing another country, how about building our own with better bridges, railroads, highways and airports, how about tending to those who need jobs and homes, how about health care that really gets the job done?

Then we might finally achieve the transformative moment when even Donald Trump at last becomes president for real. But don’t hold your breath. It is foolish to expect anything like this from a man-child who plays with America’s destiny as if it were a rag doll in his gilded crib.

Bill Moyers is the managing editor of Moyers & Company and BillMoyers.com

Can Donald Trump Really Be ‘Unpredictable’ On Foreign Policy? | The 11th Hour | MSNBC