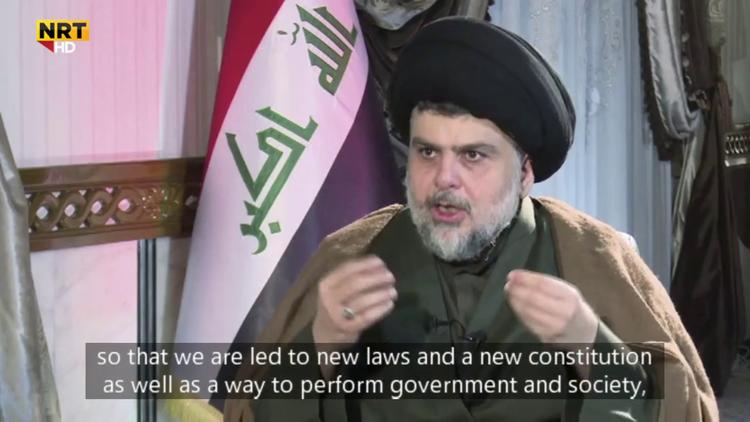 Iraqi Shiite cleric Muqtada al-Sadr on Saturday issued a broadside demanding that Russia and the United States withdraw from Syria and that strongman Bashar al-Assad resign as president.

Al-Sadr’s stand against al-Assad is unusual among Shiite movements. The Lebanese Shiite militia, Hizbullah, has entered Syria to battle for al-Assad’s survival. Iran is also strongly backing him. Other Iraqi Shiite militias, such as the League of the Righteous, have sent units to support the al-Assad regime, for instance in the battle for Aleppo. Contrary to what some allege, the Twelver Shiite groups are not very likely to be supporting al-Assad because he has an Alawite Shiite heritage. Alawites are not considered orthodox Muslims by the Twelver Shiites. Rather, there are two reasons for their support. Hizbullah and Iran need Syria to be in friendly hands if Iran is to continue to resupply Hizbullah with munitions for defense of South Lebanon from Israel. Second, al-Assad has configured himself as fighting a wave of Sunni extremism that threatens both secularists and the region’s Shiites.

Al-Sadr, who has long been considered quirky by other Iraqi leaders, began by calling on US President Donald J. Trump to stop going to excess in taking frivolous and thoughtless positions and decisions. He said Trump’s flakiness not only damages the US but also the world community. He warned that a heavy US intervention in Syria could turn into a Vietnam-style quagmire for Washington. Nor did al-Sadr see how Trump could bombard civilians to death in Mosul and then turn around and condemn the Syrian government for its killing of civilians (admittedly by horrific gas).

He also doubted that the US could accomplish anything positive in Syria. After all, he said, the Americans announced that they would help roll up ISIL in Iraq years ago, but ISIL is still there.

Al-Sadr asked, “Wasn’t enough for Syria that all sorts of internal and external actors were interfering in the country, such that the US should now initiate a negative role there, as well? The only one harmed by that,” he said, “is the Syrian people.”

Al-Sadr added, “I wouldn’t rule out that Trump’s decision to strike Syria will permit Daesh (ISIS, ISIL) to spread into other areas.” If the US wants to play the role of peacemaker and promoter of dialogue in conflict situations, he said, it can’t put off limits an honest broker role in Palestine, Burma, Bahrain, and so forth, where it sides heavily with one side against another.

Al-Sadr called on all parties to withdraw militarily from Syria and for the Syrian people to take charge, since it is the only legitimate actor that can determine its own destiny. Otherwise, only terrorism and occupation will benefit.

Al-Sadr went on to say “I find it fair that President Bashar al-Assad should tender his resignation and step down from power out of love for beloved Syria, so as to spare it the horrors of war and its domination by terrorists. He should give the reins of power to some popular and effective individuals who can stand against terrorism, so as to save Syrian territory as quickly as possible, so that his action can be lauded as historic and heroic, before it is too late…”