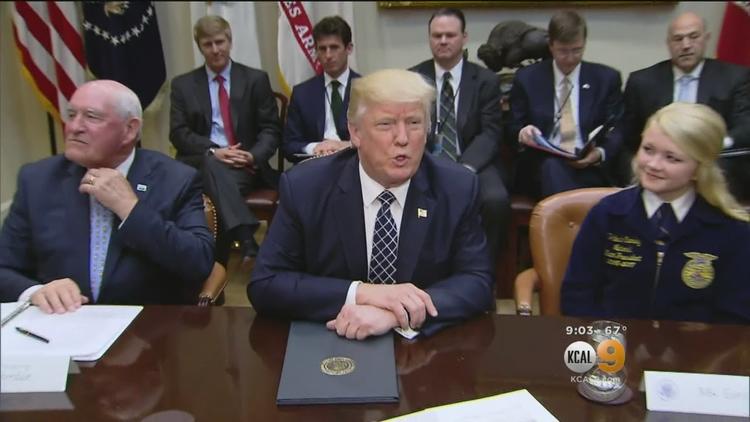 US district judge William Orrick responded to a lawsuit by the county of San Francisco and by Santa Clara county against a Trump Executive Order conveyed to them by the Department of Justice, threatening to deny Federal funding to self-proclaimed sanctuary cities by striking down the DoJ. This is the third time a Trump policy connected to immigration has been struck down by lower courts on the grounds that it is unconstitutional, raising questions as to whether this administration has a grasp on the constitution.

The Trump administration acted with fury and called Orrick an “unelected judge.” Yes, but federal judges are appointed by the Federal government, which is . . . elected. And besides, the constitution doesn’t change with each election.

The Trump administration argued that the Executive Order only reaffirms existing law. There are three Federal grants in the Department of Justice and Homeland Security that already have a rider requiring county compliance with immigration law. Only Santa Clara has one of these grants, to the tune of a million dollars a year.

Judge Orrick, however, did not accept the Trump administration’s claim that the plaintiffs lack standing or that all the Executive Order did was to reinforce those three existing laws. He pointed out that the EO claimed to be able to block all Federal funds to the affected counties.

Not only did the EO say that, Orrick pointed out, but Trump and Attorney General Jeff Sessions both publicly made such claims:

“And if there was doubt about the scope of the Order, the President and Attorney General have erased it with their public comments. The President has called it “a weapon” to use against jurisdictions that disagree with his preferred policies of immigration enforcement, and his press secretary has reiterated that the President intends to ensure that “counties and other institutions that remain sanctuary cites don’t get federal government funding in compliance with the executive order.” The Attorney General has warned that jurisdictions that do not comply with Section 1373 would suffer “withholding grants, termination of grants, and disbarment or ineligibility for future grants,” and the “claw back” of any funds previously awarded. Section 9(a) is not reasonably susceptible to the new, narrow interpretation offered at the hearing. ”

Orrick points out that Congress decides on funding issues, not the executive, so that the president can’t just wake up in the morning and put restrictions on Congressionally mandated funding.

In addition, “Further, the Tenth Amendment requires that conditions on federal funds be unambiguous and timely made; that they bear some relation to the funds at issue; and that the total financial incentive not be coercive. Federal funding that bears no meaningful relationship to immigration enforcement cannot be threatened merely because a jurisdiction chooses an immigration enforcement strategy of which the President disapproves.”

Trump’s lawyers also argued that the counties did not have standing to sue, since nothing had actually yet been done to them.

Judge Orrick pointed out that the EO had caused budgetary uncertainty, since it threatened to deprive them of hundreds of millions of Federal dollars. Moreover, he said, the Trump EO caused them ongoing constitutional injuries. It violates the separation of powers doctrine and deprives them of their Fifth and Tenth Amendment rights.

He went even further and rejected the whole legal logic of Trump’s demand that local jurisdictions that arrest undocumented persons hold them in jail so that ICE can come by and deport them.

He wrote, “Several courts have held that it is a violation of the Fourth Amendment for local jurisdictions to hold suspected or actual removable aliens subject to civil detainer requests because civil detainer requests are often not supported by an individualized determination of probable cause that a crime has been committed.”

Moreover, ICE does not reimburse local jurisdictions for the cost of keeping a Federal suspect locked up for a long time.

So the takeaway is that Trump attempted through his EO to make a coup. He tried to take spending decisions away from Congress, violating the separation of powers clause of the constitution. He also tried to throw out the Fifth Amendment’s guarantee of due process. And, he tried unilaterally to abrogate the Tenth Amendment, which says “The powers not delegated to the United States by the Constitution, nor prohibited by it to the states, are reserved to the states respectively, or to the people.”

Trump was attempting to hijack local government for Federal purposes, in the absence of even the slightest statutory guidance from the states.

It is frightening that this administration (it isn’t just Trump) is perfectly OK with pissing all over the constitution to get what it wants.

For the moment, the courts are holding the line.

CBS in LA: “Courts Hand Trump Another Setback In Dealing With ‘Sanctuary Cities'”