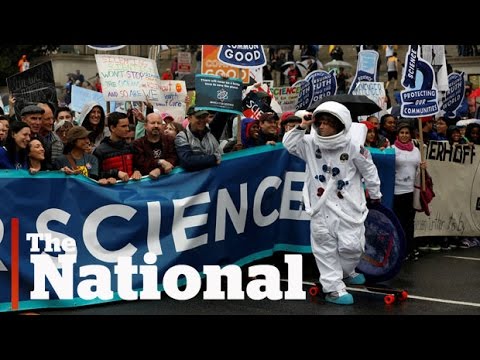 The marches for science in the United States and around the world are an expression of alarm about the Trump administration’s budget proposals, which slash public funding for science, medical and technology research and seek to increase the Pentagon budget by $54 bn.

Federal funding for certain kinds of research is absolutely crucial. There are diseases, for instance, that private companies don’t see as a priority because they strike a small number of people or the cure for which is unlikely to produce big profits because most victims are poor and live in the global south.

If you live in Florida or other semi-tropical parts of the US, and your family is expecting a child, you may be alarmed at the rise of the Zika virus. It is the National Institute of Health that is funding the search for a vaccine. Perhaps you remember the deep public concern about the Ebola outbreak in West Africa in 2014. Who is working on a vaccine? The US government and Merck. In the US system, vaccine development is a government-private-public partnership: “Of the $1.4 billion that fund US vaccine research and development annually, 46% comes from vaccine sales, 36% from taxpayers, and 18% from risk capital.”

As for technology, entrepreneurs most often build on government-funding. Of a ten-mile journey toward innovation, 9 of the miles are often traversed by government-backed research, and the entrepreneurs come in for the last mile. Forbes admits, “the basic technologies that Apple AAPL -0.13% products are built on (and those of all tech firms), from the chips, to the Internet, to GPS, to the software protocols, were all supported or wholly developed by government programs.”

Trump’s cuts will not only make us sick and retard the technological advances that make our lives more convenient, he will harm us in precisely the area he imagines himself to champion– US competitiveness.

You don’t compete with the rest of the world by giving an extra $54 billion to the military and deeply cutting research and development (R&D) funding.

The National Science Foundation observes that China, South Korea and India are putting enormous government money into R&D, as well as investing in science education and the production of skilled science and engineering students. Trump, in contrast, gave away US education to Betsy DeVos, who ruined Michigan K-12 education and wants Americans brought up in fundamentalist charter schools. The NSF writes,

“Indicators 2016 makes it clear that while the United States continues to lead in a variety of metrics, it exists in an increasingly multi-polar world for S&E that revolves around the creation and use of knowledge and technology. According to Indicators 2016, China is now the second-largest performer of R&D, accounting for 20 percent of global R&D as compared to the United States, which accounts for 27 percent.

China is already increasing its annual outlay far more than the United States, growing R&D spending nearly 20 percent a year every year from 2003 to 2013. That rate of increase far outstripped that of the US in those years, and now Trump actually wants us to slash spending, while the Chinese go on investing in technological innovation.

The day when China outspends the US on research and development annually is just around the corner, and Trump’s budget would bring it even more quickly.

In some areas, China is nipping at our heels. The global share of the US in high-tech manufacturing? 29%.

Almost half of all the bachelor’s degrees awarded very year in China are in Science and Engineering.

While China and South Korea massively ramp up government R&D investments, the Tea Party Congress in the US has been deeply cutting ours.

“In 2013, government funded R&D accounted for 27 percent of total U.S. R&D and was the largest supporter (47 percent) of all U.S. basic research”. . . “Indicators shows that Federal investment in both academic and business sector R&D has declined in recent years. . . Since the Great Recession, substantial, real R&D growth annually — ahead of the pace of U.S. GDP — has not returned. Inflation-adjusted growth in total U.S. R&D averaged only 0.8 percent annually over the 2008-13 period, behind the 1.2 percent annual average for U.S. GDP.

The world will not stand still while Trump undermines the nation’s science and technology capacity. And by the way, that won’t bring back jobs — it will send them away.

In fact, if Trump gets his way on the science budget, my advice to Americans is to start studying Chinese.

Ooops. Trump is cutting money for that, too.