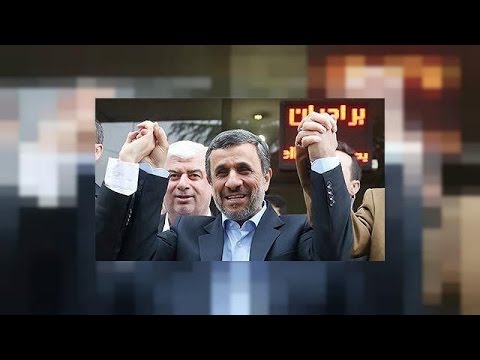 BBC Monitoring, which translates foreign-language news reports, has a rundown on reactions in Persian to the surprise registration by Mahmoud Ahmadinejad to run for president in the May 19 Iranian elections.

Ahmadinejad was a complete disaster and made Iran a laughingstock by his erratic pronouncements, his government’s poor fiscal policies, and its corruption. His run for a second term was widely seen in Iran as characterized by fraudulent ballot-stuffing, and his victory in summer of 2009 provoked the biggest demonstrations Iran had seen since the 1980s, which became known as the Green Movement.

Having Ahmadinejad and Trump in office at the same time would be too much to bear, and the two of them could well be a volatile mix.

Trump and Ahmadinejad are actually similar in their political styles. Both claim to be populists who would take on the fat cats, but both serve the fat cats. Both are authoritarians. Both are male chauvinist pigs, though Ahmadinejad is not grabby about it. Ahmadinejad once sent goons to department stores to cut the breasts off store mannequins, as too provocative. Trump wants to put women in jail who have an abortion.

People were surprised that Ahmadinejad registered to run, because last year he asked Iran’s clerical Leader, Ali Khamenei, if he could, and Khamenei told him not to.

“The record of some individuals’ actions are known to both the people and the supervisory bodies,” ISNA quoted Ebtekar as saying.

In a separate report, ISNA news agency also quoted Vice-President for Parliamentary Affairs Hossein Ali Amiri as saying: “Those who wish to have [an official] responsibility in the Islamic Republic system, should both accept and comply with the set of rules mentioned in the constitution… obeying the leader is one of those rules”.

That is, many are saying that by disobeying the Leader’s instructions, Ahmadinejad is already doing something unconstitutional, and so is making himself ineligible to run.

Government spokesman, Mohammad Baqer Nowbakht ‘could not hide his surprise when he asked reporters “Are you sure?”‘

‘In a post on his Instagram page (kouchakzadeh_mahdi), the former hardline MP, Mahdi Kouchakzadeh, he supported Ahmadinejad despite “all accusations and insults of the Seditionists” because he believed in Ahmadinejad as a devouted defender of the poor. “With your move today, which was against the advice given by the imam [referring to the Supreme Leader Ayatollah Ali Khamenei]…that belief is shattered.” His hand-written statement began with an Arabic phrase meaning “this is where we separate our ways”.

Former Hardline MP Elyas Naderan described the move as “the end of Ahmadnejad” on his Twitter handle. (bit.ly/2psOqOT)

A lot of canny Iranian observers are predicting that Ahmadinezhad will be ruled ineligible to run (in Iran there is a clerical body that vets candidates for ideological purity).

My guess is that if he were allowed to run, Ahmadinejad would just divide the conservatives and so might actually be helping centrist current president Hassan Rouhani?

But as someone who back in the zeroes had to constantly be trying to explain what I thought Ahmadinejad was trying to say with his outlandish utterances, the notion that we’d have this stream of nonsense coming at us from both Tehran and Washington is too much to bear. And, Ahmadinejad always made it easy for the US press and politicians to demonize him, which would weaken Iran’s case.